At Pro Football Journal we are trying to pick the best individual seasons in the history of each franchise, which we will continue today with the Redskins. By "Career-year" we mean the best performances at each position, with the following rule: Only one season per player per position. For example, here, we cannot pick Sammy Baugh’s two seasons and use all QB slots. 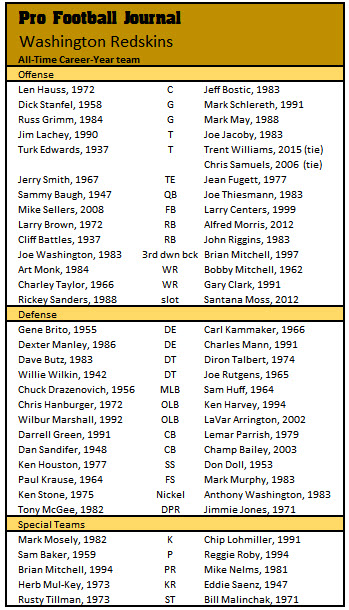 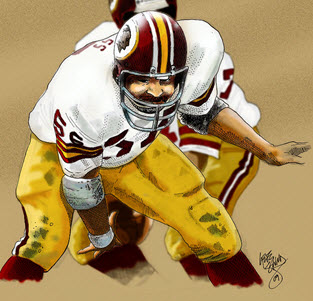 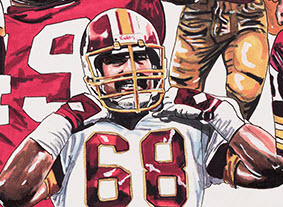 Edwards was a two-way the literature of the day states his prowess was more on the offensive line, as a blocker for Baugh and Battles. Outside Anthony Munoz, Jim Lachey may have been the best tackle of his era. In 1990 he allowed no sacks and was called for only on holding penalty. In 1991 he was called for one hold and one false start and again gave up no sacks. Grimm was All-Pro and the NFLPA NFC Lineman of the Year in 1984. had his highest honors from the All-Pro voters in 1972, though in 1976 he was voted the NFL's top blocker by the 1000 Yard Club, and that season was considered as well.  is in the Hall of Fame and his 1956 season was an All-Pro-type. 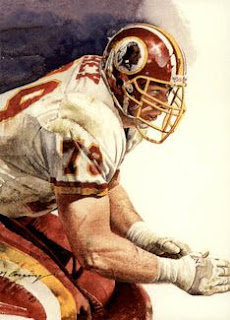 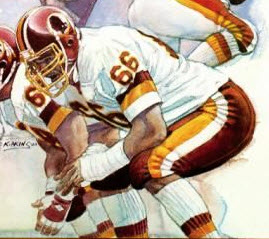 Jacoby was a dominant blocker in his prime and his coach, Joe Bugel, said 1987 was "by far Jacoby's best season" but we chose 1984. In 1987 he gave up 5 sacks and 2 more in the playoffs, and was very good, but we really think 1984 was better, he was a consensus All-Pro and the runner-up to Russ Grimm for the NFLPA NFC Lineman of the Year and the runner-up to John Hannah for the NFL Alumni NFL  Lineman of the Year. Pretty good company so we go with 1984.

We tried to find separation between Williams and Samuels, but they were just too close. In 2001 Williams gave up  2.5 sacks and was guilty of two holds 2 holds. In 2006 Samuels gave up 4 sacks and was flagged for as single holding call. 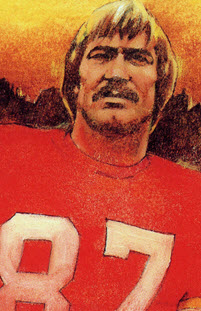 Taking the First-team slots at receiver are Art Monk, 1984 (his only All-pro season and his best with 106 catches before that became routine), and Charley Taylor, 1966. Taylor was First-team All-pro in 1967 and Second-team All-pro in 1966, but his 1966 season was better, showing that sometimes what other receivers do in a given year affects who is and isn't All-Pro. In 1966 he had 12 touchdowns and over 1100 yards receiving while still playing a lot of running back early in the season. 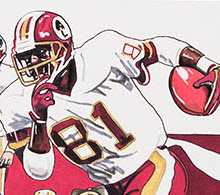 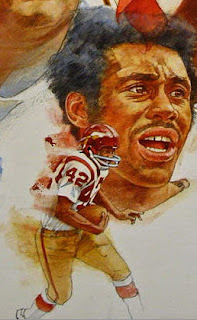 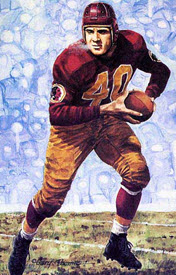 The modern "guard-in-the-backfield" fullbacks are in order: Mike Sellers, 2008  Larry Centers, 1999, Darrel Young, 2011, and Otis Wonsley, 1983. Centers was more than most of the modern fullbacks in the pass receiving department, he was also an effective down back.

Joe Washington was not only the third down he'd spell John Riggins, too, so though he has more carries than any other nickel running back in our series, he gets the First-team spot.  Brian Mitchell, 1997, is the Second-team and honorable mentions are Terry Metcalf, 1981Kelvin Bryant, 1987, Roy Helu, 2014, and Keith Griffin, 1985. 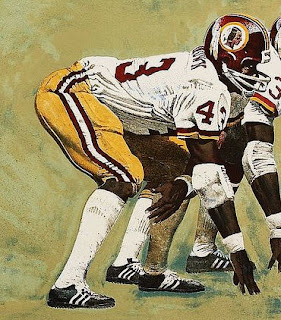 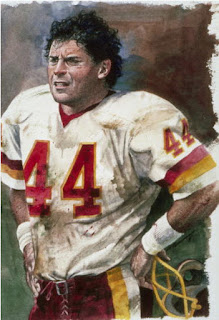 The starting running backs are Larry Brown, 1972, and Cliff Battles, 1937. Brown was the consensus NFL MVP in 1972 and Battles the best player on a team that featured Sammy Baugh and Turk Edwards. Battles won a rushing quintuple crown leading the league in rushes, yards, yards per carry, rushing touchdowns and the longest run.

Backing them up are Alfred Morris, 2012, and John Riggins, 1983. Both seasons are very well known and were stellar. 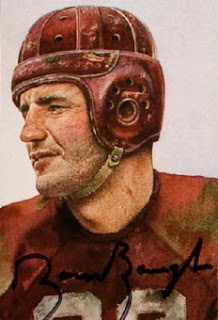 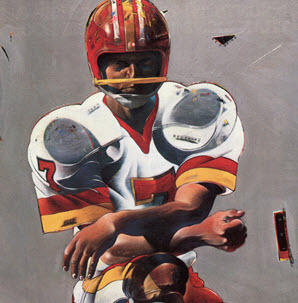 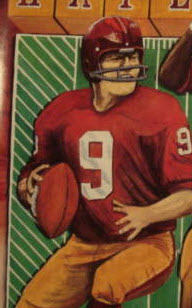 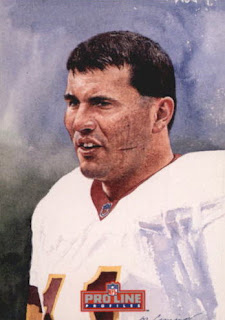 The top quarterback season for the Redskins is Sammy Baugh's 1947. Joe Thiesmann, 1983, is next and the HMs are Sonny Jurgensen, 1967, Mark Rypien, 1991, and Pro Bowler Robert Griffin, 2012. Also, from a pure perspective Kirk Cousins, 2015, also qualifies, though we are often dubious of modern-day numbers, Cousins did set some franchise records in 2015.

Baugh was simply ahead of his time. 1983 was an MVP  we still  with Jurgensen in the Second-team in the end put Jurgy on the honorable mention list but it was very close. 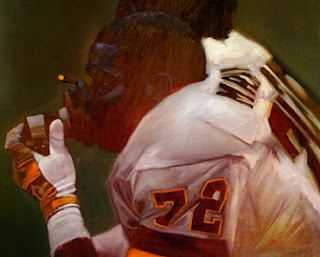 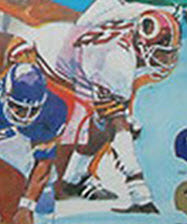 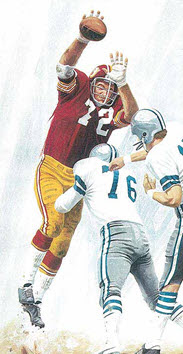 is one of the unheralded players of his era. He was the first full-time middle linebacker in the 4-3, though the Redskins would play both a 5-2 and a 4-3, but in 1953, Curley Lambeau's last season as coach of the Redskins they played the 4-3 a lot, the exact percentages are not known but Coach Troup estimates it at perhaps 40%. And that jumped in later years. 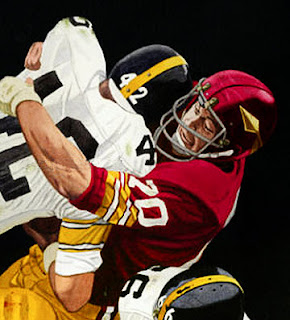 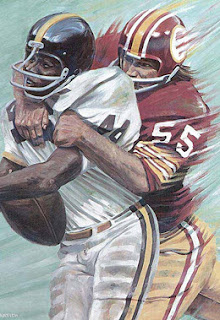 was the NFC Defensive Player of the Year a consensus All-Pro and was excellent all phases of the game. He ended the year with 95 tackles, 3½ sacks and 4 picks. Marshall's 1991 and 1992 seasons were nearly identical, but we went with 1992 in the end, due to his being named NFC Defensive Player of the YearHe ended the 1992 season with 87 tackles, 6 sacks, 12 passes deflected, two picks, forced three fumbles and recovered three. What made it so hard is in 1991 many of the numbers were similar, but he had 5 interceptions, but fewer , it was really a toss-up.

Ken Harvey had 98 tackles, 13.5 sacks and four forced fumbles and was Second-team All-Pro in his career-year. Arrington was Second-team All-Pro in 2003, but we went 2002 when he had 93 tackles, 11 sacks, 8 passes deflected three fumbles recovered (one for a touchdown). In fact, the year before was also a consideration when he dropped into coverage more and picked off three passes and returned one for a score, but of those three, we went with 2002.

Brian Orakpo, 2013, Ryan Kerrigan, 2014, a couple of rush backers are honorable mentions. Orakpo had 60 tackles, 10 sacks and a pick six. Kerrigan had 64 tackles, 13.5 sacks and 5 forced fumbles. Really, Harvey, Arrington, Orakpo, and Kerrigan were neck and neck and in some ways, though not exact matches, they played similar roles; b linebackers who were defensive ends in nickel defenses. 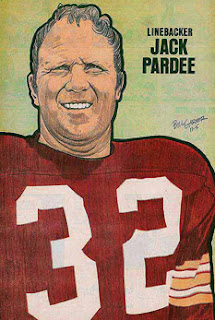 Robinson made his bones for the Hall of Fame in Green Bay, but his first season with the Redskins was excellent, grading very high. He had 88 tackles, 4 interceptions, 5 sacks, 9 passes deflected. Coleman is unique in that he was a nickel linebacker. He was pressed into service as a starter for six games, but his role was to cover and blitz and one of the linebackers in the nickel defense and ended with 10.5 sacks.


Dan Sandifer, 1948 (13 picks) and  Lemar Parrish, 1979, are the top two cornerback seasons.  Parrish was a consensus All-Pros, off 9 passes. Sandifer got off to a great start in his career, and had one stretch of 14 games where he had 16 picks. He tied Frank Seno's then-NFL record of intercepting a pass in six consecutive games and his 13 picks set the NFL record, broken in 1952 by Night Train Lane. He was and fast with good to author T.J. Troup. 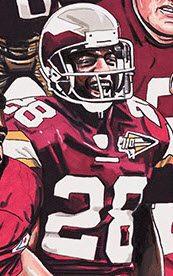 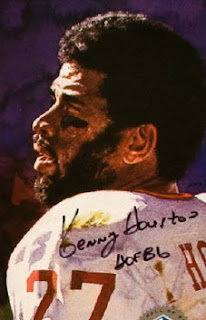 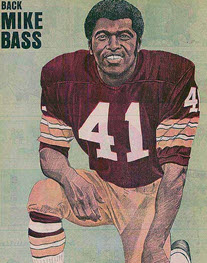 Those two are followed by Darrell Green, 1991 and Champ Bailey, 2003. Some Redskins fans may bristle at Green on the Second-team, but this is a single-season list, not an All-Time Team and the two in front were just a bit ahead of Green's 1991 when he was All-Pro picked off five passes and often playing what Jon Gruden calls "star coverage" meaning in certain games he'd follow the opposing team's top wide receiver, rather than just playing right cornerback.

Houston had several seasons considered, 1973 and 1975 were eliminated due to too many missed tackles (25 and 15 respectively), leaving 1974 and 1976-78. We chose 1977 because he was a steadying factor in an aging defense had 80 tackles, 4 forced fumbles, 5 picks and 16 passes deflected and was All-Pro (as usual). Doll was called by some the most defensive back of his time, he was a solid coverage was also a fearless run defender for his size.

The nickel are Tony McGee, 1982, Jimmie Jones, 1971 (7½ sacks) take the top slots. They are followed by Jumpy Geathers, 1991, and Joe Jones, 1979. McGee could have been picked for 1983 as well when he had 10 sacks. Jimmie Jones, like 49ers Cedrick Hardman the season before was one of the very first designated pass rushers and would come the game for Ron McDole or Verlon were good George Allen felt Jones was a special rusher who could give the pass rush a spark. He led the team in sacks, despite starting just a single game.  an inside rusher and it wasn't about sacks, it was his inside power and forklift rushes that were impressive. Turkey Jones had 6½ sacks in a designated role in 1979. 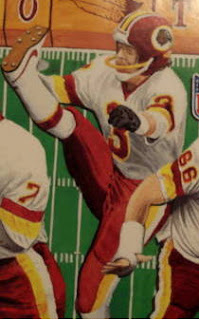 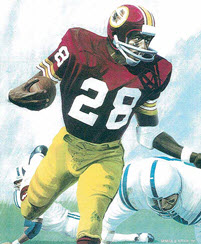 Tillman was graded as more consistent in 1975, but according to George Allen "wasn't as spectacular as in the past". We will go with the more spectacular 1973. Malinchak's 1972 was also in the running.

Agree or disagree? Let us know in the comments section below.
Posted by John Turney at 2:44 PM