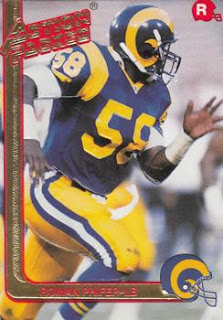 When lists are compiled for the best players never to play in a Pro Bowl or to never garner post-season honors like All-Pro or All-AFC/NFC Roman Phifer should be on them.

He had a fine career, ended with three Super Bowl rings, but he never was named to an All-Pro team or even an All-Conference team. He was a Pro Bowl alternate in 1995 and possibly with the Patriots, but the Pats usually didn't release the names of their alternates.

Phifer was a coverage linebacker who was not asked to blitz much in his career. He was more valuable in coverage and in an era of the Run and Shoot offenses and others that employed 4- and 5-receivers he was the lone linebacker in the Rams dime package. And when the Rams used their version of the 46 he was one of the linebackers of the line of scrimmage, that is until 1997-1998.

Those seasons he was usually on the outside, playing essentially the rush end position on the right side,  in 1998 than 1997, but with the arrival of Bud Carson and a new scheme his role changed. a couple of seasons with the Jets and in 2001 signed with the Patriots who found ways to use his versatility, still able to cover well and able to blitz and be effective at it when he did.

Here are his career statistics. are the source for the tackles. 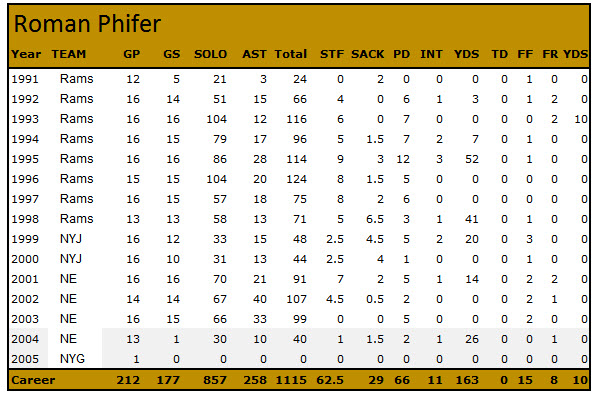