Exploring the Origins of the Designated Pass Rusher: Part I 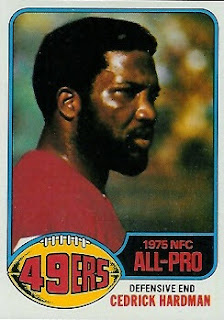 It is difficult to know exactly when an innovation entered into pro football. The safety blitz was purported to have been invented by Larry Wilson in 1961 but in 1960 the Oilers of the AFL employed the same tactic the year before.

The same is true of the nickel back, when was it first employed? No one is really sure. When was it employed "in earnest" that is when it was a dedicated part of a defensive game plan would be a better test.

The same is true for the so-called "designated pass rusher" or nickel rusher. Today it is commonplace, so much so that it's not talked about much in the media, either on the Web or during games, but it is a vital position. Sometimes it's an older player coming in at the end of his career or a younger player with his young legs taking the place of a 3-4-type end when a team uses four down linemen.

Years ago we spoke to Paul Zimmerman, then SI's head writer. He mentioned he thought perhaps Larry Cole, in 1968 would come in to fill in for a heavy-legged starting left defensive end Willie Townes. But, Townes was injured early in the season and Cole became the starter anyway.

In 1969 Roger Brown sustained an injury and youngster Coy Bacon became the Rams starting right tackle, but when Brown returned they split time and T.J. Troup indicates that essentially Bacon, the younger, quicker player was used on pass downs in a platoon with the older, heavier Brown.

However, neither really did it for a sustained time. We think that distinction came in 1970 when Cedrick Hardman was a rookie. He was a dynamite pass rusher in college and taken in the first round by the San Francisco 49ers. He was, though, not ready to be an NFL starter. "Heck, it took him until 1972 to learn how to close a trap. He threw a party for him when he got it done", says then 49er linebacker coach Mike Giddings. Hardman started five games that season after the 49ers coaching staff had tried to groom Hardman. Early in the season he'd rotate in at right defensive end, but "the idea was to get him run-stopping experience in the rotation and then get him into the game on passing downs" recalls Giddings.

It worked well as the 49ers won the division and Hardman led the team in sacks with 8½. In the following clip you can see Bill Belk leave the game and Hardman enter the game and make a play.
In Baltimore, Bill Newsome sometimes was used in a similar role. He beat out Roy Hilton early in the season but later, Hilton re-secured the right DE spot, but there were plenty of times film study shows Newsome at left DE and usual left DE Bubba Smith playing inside and Hilton playing right DE. Billy Ray Smith, the 34-year old tackle was out of the game. Interestingly, in reviewing Super Bowl V these variations were not used much, if at all.

In 1971 George Allen used newly acquired Jimmie Jones in the same way. (He also used Bill Brundige as a rush tackle to relieve Manny Sistrunk on pass downs). Jones was a tall, light, extremely quick player who led the Redskins in sacks in 1971 with 7½ sacks, the first we know of to lead a team in sacks while starting only one game.

In this clip you can hear Frank Gifford mention this Redskin duo entering the game in a passing situation.
In the Los Angeles Rams employed what they called their "57" defense when they would try and get three DEs on the field on passing downs. Deacon Jones was the left DE and early in season he missed a few games with a fallen arch, rookie Jack Youngblood filled in and the Rams won all three games. When Jones returned is when the Rams used the "57" with Youngblood playing right DE (a position he hated) and usual right DE Coy Bacon reducing to defensive tackle.

In the same game as the first clip you can hear the ABC announcing team mention Youngblood's role, coming in on a pick 6 and leaving on a 3rd and one. 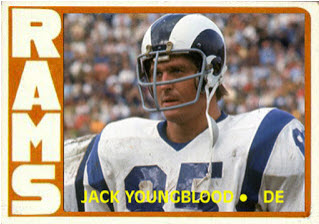 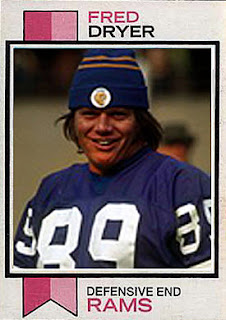 The next season Youngblood started 11 games at left DE and newly acquired Fred Dryer started three, but in the games Dryer got a lot of action in the "57" playing right DE and again, Bacon playing inside. Dryer ended the season with 4½ sacks. 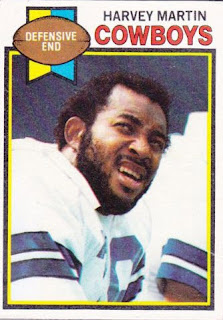 In 1973 Harvey Martin won the designated role in training camp and he'd play in sure passing downs at left defensive end, with, ironically, Larry Cole going to the bench. Martin ended the season with 9 sacks as the Cowboys advanced to the NFC Championship game.


This clip shows Martin come in on a 3rd down and 17 and sack Fran Tarkenton in the NFC Championship game.
The next season number one overall pick Ed Jones was the designated rusher on the right side, Martin on the left and Bill Gregory would come in for Bob Lilly. Lilly told Pro Football Journal, "they replaced me on passing downs my final tow years and to this day I don't know why. At that stage in my career, I was a better pass rusher than run player". 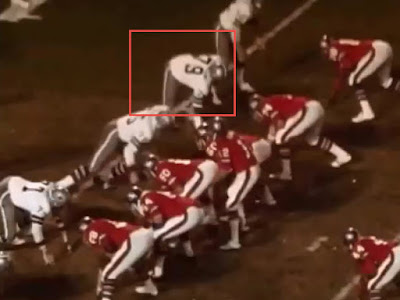 Pat Toomay said the experience was fine by him, "More effective pay per play" he wrote in his book The Crunch. "I was getting paid the same no matter how many plays, so, the way I say it my 'pay per play' went up". After the season Toomay was dealt to the Buffalo Bills and in 1975 Ed Jones and Harvey Martin switched sides and became the starting DEs in the "Doomsday II" defense and Martin ended the 1974 season with 7½ sacks and Jones had 6 (in Dallas they were called 'traps') sacks. 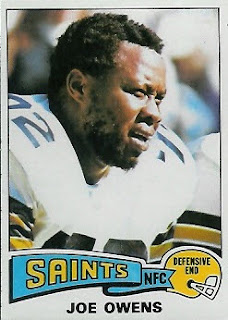 In 1974 the New Orleans Saints used a 3-4 defense quite a lot. In that scheme their usual 4-3 right DE, Joe Owens, would be on the bench. Bob Pollard would play right DE in the 30. When they went to nickel (4-2-5) Pollard would play inside (similar to what Bubba Smith and Coy Bacon had done and what Howie Long and Dan Hampton would do in the future) and Owens would come in and be the sack master, and he led the team in 9½ sacks.


Also in 1974 the great Deacon Jones filled the DPR role for the Redskins. Jones had started all 13 of his previous seasons but signed with the Redskins and George Allen to try for one more shot at an NFL title. Jones played both left and right DE, usually taking LDE Ron McDole's place (McDole is who left the game, usually, in 1971 when Jimmie Jones came into the game) and the Deac ended the season with three sacks, though he had one taken away due to a penalty.

Joe Owens was used in the same role in 1975 as well, finishing with 6½ sacks. However, there were times he'd spell new right DE Stave Baumgartner at right DE in the times they used the 4-3. 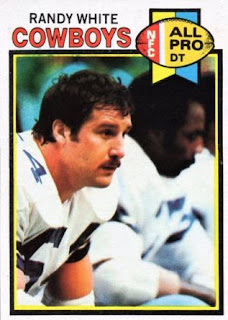 In 1975 the Cowboys had another stud rusher they had drafted: Maryland's Randy White. Dallas thought he'd end up being a starting linebacker in their defense, eventually. In the meantime, he'd be used in a variety of ways, mostly as a rusher on pass downs. The Cowboys would line up White as and outside linebacker in a 3-3-5 defense and rush, either from the right or the left. He'd also take either Jethro Pugh's spot at LDT or Larry Cole's spot at RDT and rush on 3rd and long situations and would also line up as a nose in a 3-man line. He had 11 sacks combined in 1975 and 1976.


The Chiefs had a rushman in 1976 as well and they finished with 5½ sacks and only started three games. We have not seen enough 1976 Chiefs film to know his role exactly, but we suspect it was as an inside rusher in likely passing downs, in that the Chiefs had decent ends, Whitney Paul and Wilbur Young, though they seem to be reversed in where they lined up, but that's a different topic altogether. 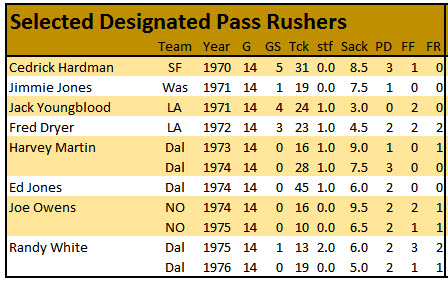 Continue reading in Part II:
Posted by John Turney at 5:00 AM