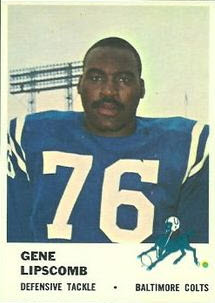 On Monday we discussed the usage of a zone blitz by Colts defensive coach Bill Arnsparger in 1964 and ended with the question of where did HE learn in it.

T. J. Troup commented that even before that the "1961 Oilers, against Denver, under the savvy guidance of coach Wally Lemm, used zone blitz with DB coming off the edge, and LDE dropping into coverage."

Here is a still: 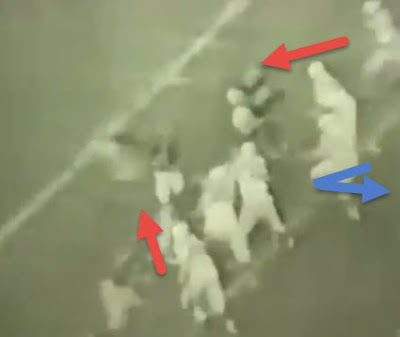 And the clip:
We apologize for the poor film quality, but sometimes that's how it is with older films. The play results in an interception but notice how Lipscomb steps into the guard then drops back, likely to the middle zone and the linebackers put pressure on Rams quarterback Billy Wade.

Again, we are not sure when the first time a lineman was asked to drop into coverage and he is replaced in the rush by a linebacker or defensive back. It was likely in this era, but when?

The Colts did quite a few things with Lipscomb, especially 1958-60. He'd sometimes lineup as a right inside linebacker to give the Colts a 3-4 look.

Here is a still, and it's not the angle we would prefer, we've seen better, but here you can see usualy left defensive tackle, Art Donovan on the center with Gino Marchetti and Don Joyce aligned on the outside shoulders of the tackles. Out of frame is Lipscomb, though you can see his sizable shadow right behind Donovan. Eventually, we will get some better shots for you. 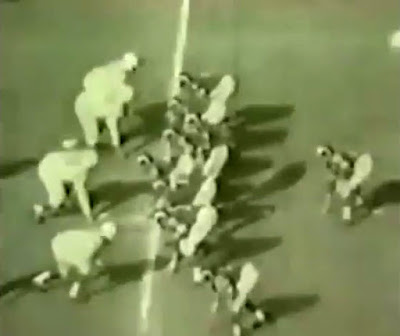 We've also seen in film study that the Colts would stand up Marchetti on some rare occasions to give the Colts a 3-4 look. Here is one of those with Marchetti standing up over the flexed tight end Lamar Lundy at the top of the shot and the Colts showing Double A-Gap pressure by two of their linebackers: 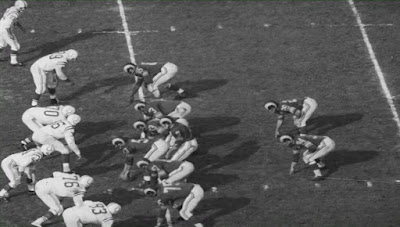 At that time Lipscomb was a sideline-to-sideline player rather than an up-the-field defensive tackle that he became with the Steelers in 1961 and 1962. The Colts took advantage of that by standing him up and allowing him to read the play and react, using his good speed (for his size) and agility to flow to the ball.

Was he a hyrbid player—a defensive tackle/linebacker? No. It wasn't done enough to warrant calling him that, but they did it enough to call it a "thing" as the say today. Some games he stood up as many as 10-12 times. Other games he didn't do it at all. It does show that the coaches of the 1950s and 1960s were creative and tried various things in their respective schemes. They didn't line up the same down after down.

In a later post, we will show some shots of the 1960s AFL, where every team used a 3-4 defense at times, though none did it exclusively. Buffalo and San Diego likely did it the most, though the Patriots and Chiefs were pretty close. All of them seemingly did it with the same personnel as their 4-3 defenses, so they didn' swap players, the players like we've shown with Lipscomb and Marchetti just changed their stance and alignment to give a different look