Part VII: Who Will Be On NFL's 100th Anniversary Team? 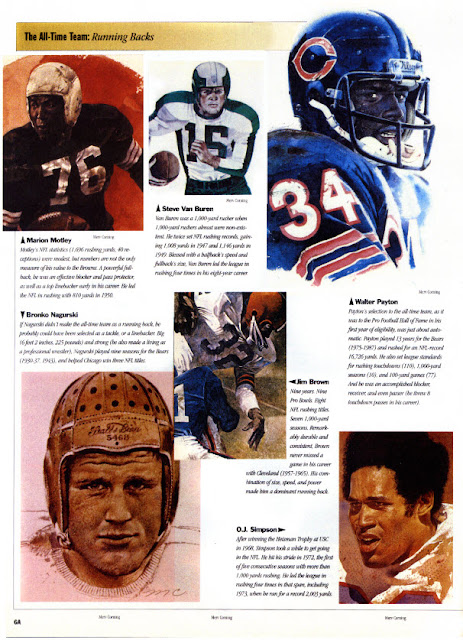 Looking ahead, we wonder if they will keep the same fullback-running back format. They may choose fewer fullbacks since the fullbacks of the past 25 years are the blocking backs, the "guard in the backfield" type fullback and none of them will emerge in our view.

So, Motley and Nagurski may have to be on a two-way type team, but again, this is just our best guess.

O.J. Simpson will not survive the cut, and Steve Van Buren may not, either. Walter Payton is a lock. The top contenders for whatever spots there are would be Emmitt Smith, Barry Sanders, maybe LaDainian Tomlinson since his skills were so diverse and under the same umbrella would be

Marshall Faulk who was an all-around back like Tomlinson but was even better at running wide receiver routes. Of note is while watching a telecast in 2000 or 2001 the play-by-play announcer asked color commentator Jack Ham who Faulk reminded him of. Ham replied "Earl Campbell". That was a surprise. Ham explained that Faulk's lower body was tremendously powerful and his goalline running was extremely effective. Faulk was suspect to some injuries in his career and Tomlinson was healthier so that may be a factor.

But, over the past quarter century, it seems Emmitt and Barry would be the best bets to be locks, along with Brown and Payton. The roster is deep and great runners like Eric Dickerson and Adrian Peterson will likely be left out. They didn't do it all (or most of it) in terms of running AND receiving and blocking and short yardage and all the little things that go into a running back evaluation.

Barry Sanders was not effective on the goal line for most of his career (his style was too conducive to losing a yard or two too frequently—but that style allowed him to break one for 70 yards as well) and was simply average in receiving and less than that in blocking. Emmitt Smith was a good receiver, and a great pass blocker, to us one of the top handful along with Marion Motley, Walter Payton, Marshall Faulk and John Henry Johnson (Edgerrin James and Tomlinson were very effective as well—so maybe it's a top seven).