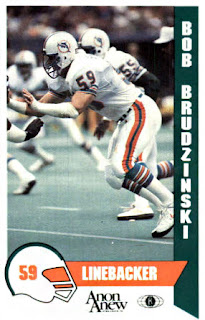 Some players played well but never received any postseason honors in terms of Pro Bowls and All-Pro teams. One such player is former Ram and Dolphins linebacker Bob Brudzinski.

Brudzinski was a tremendous run stopper. He was a college stand-up defensive end and was taken by the Rams in the first round of the 1977 NFL Draft. The original plan was that left outside linebacker Jim Youngblood would move to middle linebacker and Brudzinski was going to take that spot.

But things didn't work out that way. Isiah Robertson was upset about his contract and other things, so in 1979, "Bru" took over at right linebacker, usually the weak side. Joel Buchsbaum said he was a "9+ versus the run and a 6 versus the pass".

In 1980 Brudzinski was the one who was not happy with his contract and he held out twice in 1980, one during the season and the Rams were not having that, so they traded him to the Dolphins in 1981.

There he moved to the strong side and was part of the "Killer B" defense throughout the 1980s getting to Super Bowls in 1982 and 1984. However, aside from being All-Rookie in 1977, he was never honored as a Pro Bowler or All-Pro. He was a superb run stuffer on the strong side on a defense that was not known for stopping the run. But Brudzinski was one of a couple of guys they could count on to set his edge and to stop off-tackle runs. 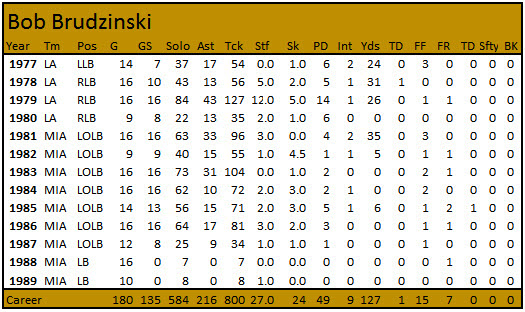