Part IX: Who Will Be On NFL's 100th Anniversary Team?

In Part IX of this nine-part series, we look at the possible secondary picks after discussing defensive line, running backs, linebackers, quarterbacks, tackles and tight ends, centers, guards, wide receivers, and special teamers who were on the NFL's 75th Anniversary Team and who may end up on the NFL's 100th Anniversary Team. 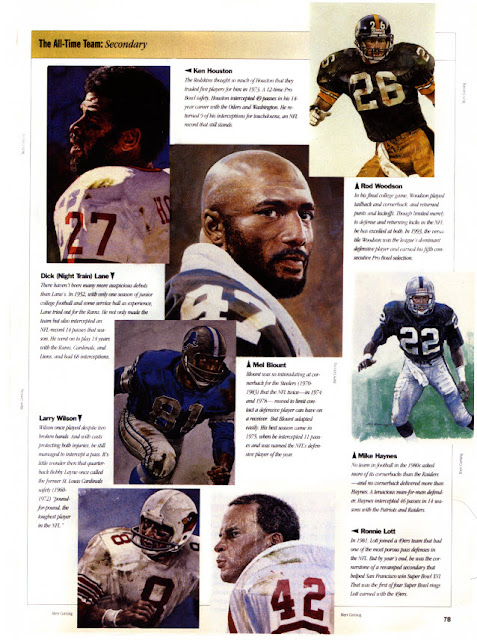 This is the toughest to gauge which is why we left it for last. All of these are solid picks but there are some excellent players who would now be eligible who were not at the times.

Night Train Lane should keep his spot as one of the cornerbacks. Mike Haynes and Rod Woodson are as worthy to be on the 100th Anniversary Team as they were for the 75th Anniversary Team, though Woodson's selection raised some eyebrows in 1994 since he'd not been in the NFL very long in comparison to others on the team. But, Deion Sanders lays claim as the best cover corner ever, though his run support was not the equal of say, Night Train.

Revis Island might want to argue he is tops, over Deion. Charles Woodson was someone who could cover outside, cover in the slot, tackle, hit, blitz (over 20 sacks) and could lay claim to being one of the best all-around corners in league history.

As for safeties, Lott should keep his spot. Our view is that Ed Reed has to be on the 100th Anniversary Team and we will see if the panel/committee agrees in 2020(1). Could he replace Larry Wilson who took the safety blitz to a new level (though he was not the first to do it, he took it to a higher level). Ken Houston, a great strong safety. In our view Brian Dawkins was great in all phases of the game, coverage in both man and zone, hitting, and was a very effective safety blitzer. We don't however, think he will quite rise to the 100th Anniversary Team level, but loved watching him play.

Emlen Tunnell was bounced in 1994 after being the safety on the 50th Anniversary Team in 1970. He was a left safety, something akin to what became the strong safety and he was, in our view, a more consistent and effective safety than Houston, so we hope he gets another look.

In our view, in reviewing these kinds of "All-Time Teams" the votes for safety are the most widely distributed so anything is possible. No one asked us but our three would be Tunnell, Lott and Reed.

Agree or disagree with this or any of the nine posts on this subject, fell free to tell us how we are wrong.
Posted by John Turney at 5:51 PM