Part I: Who Will Be On NFL's 100th Anniversary Team?

In 1969 the Pro Football Hall of Fame had the voting committee choose a 50th Anniversary NFL Team. For the 75th Anniversary, in 1994, the NFL had a select a team for the Diamond Anniversary:

Ina few years there with a 100th Anniversary Team and we wonder what players from the past 25 seasons may crack the list.

Let's start with the special teams. In 1970 the kicker was Lou Groza and no punter or returner was there were players who could have filled those roles.

In 1994 Ray Guy and Jan Stenerud the punter and kicker, Billy "White Shoes" Johnson was the return specialist. 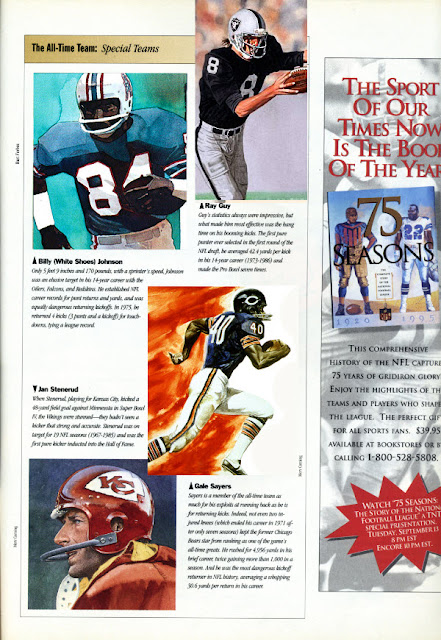 We think Devin Hester will likely supplant Johnson as the punt returner. His 14 punt return touchdowns and 5 kick returns for scores are simply too great to ignore. Josh Cribbs has 8 kickoff returns for touchdowns, which is the record, but Hester's 19 total are far and away the most. Cribbs was also a good core special teams player, covering kicks and Hester was the most productive returner.

Cribbs could challenge Gale Sayers as the kick returner, though, but Sayers did a lot a shorter time. The "eye test" would favor Sayers in our view. Dante Hall was a great returner with 6 punts and 6 kicks returned for Sayer's 6 returns in 91 chances is a 6.6%, the highest of all time among , so we think he will retain the KR spot, he'd get our vote.

It may be that the NFL will add a special teams player and our best guess if they do, would be that Steve Tasker would get that nod. Would would hope that some of the others core would at least be in the discussion. Hank Bauer, Bill Bates, Reyna Thomspson, Kassim Osgood, Brendon Ayanbadejo, Ivory Sully, and many, many others were also stellar in coverage, blocking and blocking kicks. However, Tasker did it at a high level for a long time and was an All-Pro and Pro Bowler more often than the others.

Jan Stenrud and Morten Anderson are the two Hall of Fame kickers, along with Lou Groza who was a starting tackle for the first two-thirds of his career. In terms of stats, Groza was far ahead of his peers in terms of his averages. Pro Football Research Association member Rupert Patrick has an show his metric of "Points above League Average". He calculates how many points a particular kicker in relation to his peers. , Anderson, and Stenerud all rank very high, but none are at the top. We won't give away who his top kicker is, we will let him reveal that in his book. However, one current kicker is doing very well versus his peers and that is Justin Tucker.

Our view is that if Tucker keeps it could challenge the "Big Three". Apart from that, it will likely be Anderson (a two-time All-Decade performer) or Stenerud.

Ray Guy is the only punter in the Hall of Fame. He will likely get the nod again. However, keep and eye out for Johnny Hekker. Playing for a mediocre-to-poor team in his five years Hekker owns almost every record in the book, both in terms of gross stats and in terms of "metrics".

Guy was All-Pro six times, Hekker three times in five seasons. Guy's Inside-the-20 to touchback ratio was 1.5 to one. Hekker's is currently 8.3 to 1. Almost double the next best (Dustin Colquitt's 4.6 to one—though when Sam Martin qualifies he will be around the same). But 8.3 to 1? It's unheard of.

Guy only had 3 punts blocked, which is excellent (0.3%). Hekker has had one blocked and his block percentage is 0.2%. For comparison, Jerrel Wilson, the Chief's great has 12 blocked for 1.1%.

Hekker's net punting average is 43.3 as of the end of the 2016 season. The next closest is Thomas Morstead of the Saints with a 41.2 net average, nearly two yards fewer than Hekker and in this kind of statistic that is a lot since most of the best net yardage punters are all bunched around 40.0. Guy's career net punting average was 35.2, which is good, but not great, either, even for his time.

Certainly, Hekker will have to keep up this kind of performance for the next few years to catch they eye of whoever is on the voting committee but if he does, he cannot be ignored, even if the Rams don't improve because as of now, he's the best punter ever.

It will be interesting to follow these players and see if the up-and-comers like Hekker and Tucker can sustain their greatness.

Stay tuned for the next parts of this new series.
Posted by John Turney at 5:16 PM