Part VIII: Who Will Be On NFL's 100th Anniversary Team?

In Part VIII of this nine-part series, we look at the defensive line picks after discussing the running backs, linebackers, quarterbacks, tackles and tight ends, centers, guards, wide receivers, and special teamers who were on the NFL's 75th Anniversary Team and who may end up on the NFL's 100th Anniversary Team. 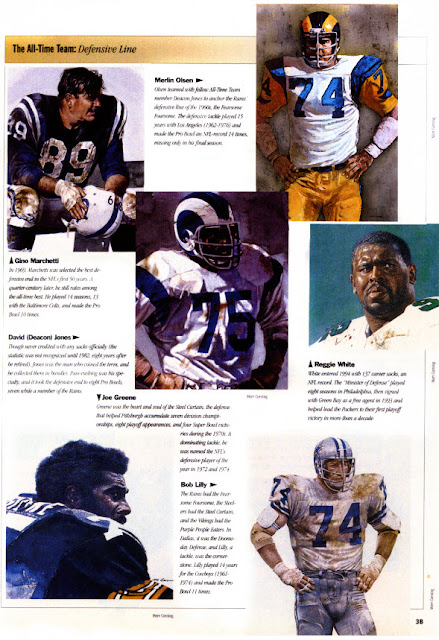 If the powers that be stay with three defensive ends and three defensive tackles this group could remain the same. Like with other position groups it seems there are too many good players and too few slots.

Ideally, there will be four ends and four tackles. If that is the case then a quartet of Reggie White, Deacon Jones, Gino Marchetti, and Bruce Smith would be perfect. If there could be four tackles then the foursome of Bob Lilly, Joe Greene, Merlin Olsen, and Alan Page would also be perfect.

In 1994 Page and Smith were left out. We don't know what the voting was but we suspect (but cannot prove) that they were both fourth in the voting.

There have been some great ends and some noted tackles in the history of the game, but these eight, in our view, stand out. The recent tackles such as Warren Sapp and John Randle just don't seem to measure up as complete players that were consistent over 13, 14 or 15 seasons as the above set of four did.

Now, one wildcard is J.J. Watt who already has a near-lock Hall of Fame career. His three Defensive Player of the Year awards would see to that. All he lacks to bust into this group of eight is longevity and if he has three healthy seasons and is close to what he was from 2012-2015 he would be hard to leave off an All-Century Team.

Again, time will tell.
Posted by John Turney at 5:32 PM