Part IV: Who Will Be On NFL's 100th Anniversary Team?

In Part IV of this series, we will take a look at the tackles and tight ends after previous looking at the centers, guards, wide receivers and special teamers who were on the NFL's 75th Anniversary Team. 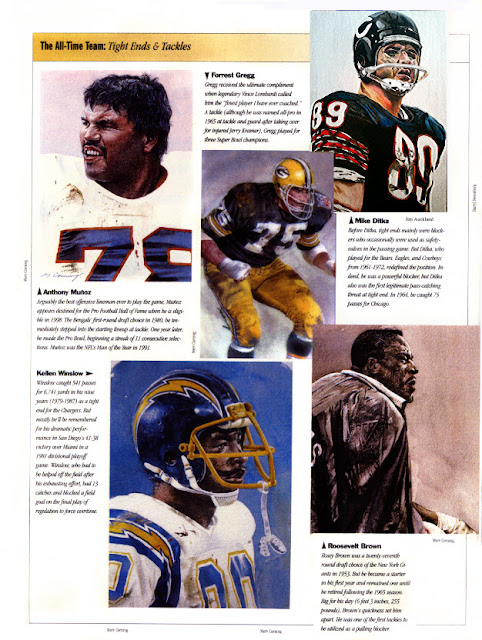 Since the last team approximately 25 years ago what tackles and tight ends have left enough of a mark to be considered for the NFL's 100th Anniversary Team?

Four tackles have been inducted into the Hall of Fame, Jonathan Ogden, Walter Jones, Orlando Pace and Willie Roaf. The former two were first-ballot inductees, the other two were second-ballot selections.

Again, if there are three choices for tackles on the upcoming team as there were on the previous one, who will they be? Munoz is a lock. There is no reason for Roosevelt Brown to be lost in a potential trend to recentism but it could happen, as it could with Forrest Gregg.

Recentism is a term used to describe the tendency of selectors or historians to favor current or more recent players to those of generations further past.We hope it is a word, it is on Wikipedia anyway. Of the four recent tackles, Ogden seems like he has the best shot at making the leap.

Stats, LLC., has been tracking offensive line stats since 1992 and we've compiled their data on this chart. Ogden was a Consensus All-Pro five times and a First-team selection an additional time and was a Second-team All-Pro in three additional seasons, for a total of nine First- or Second-team All-Pro Selections. (He was an 11-time Pro Bowler). He also was excellent at avoiding penalties and sacks (though all are in same ballpark in that metric).

Walter Jones was a six-time All-Pro (Four of them consensus) and was the virtually same as Ogden in avoiding penalties and allowing sacks.

The following chart shows the key stats on a per 16 game basis.

Roaf got called for a couple more holding penalties per 16 games and Pace was the best at avoiding holding but had an issue with false starts.

So, if Gregg or Brown get bounced we'd expect Odgen to be the guy, followed by Walter Jones (and for what it's worth we think a slightly more consistent left tackle than Ogden and the best outside of Munoz).

As far as tight ends, John Mackey was the 50th Anniversary tight end and Mike Ditka and Kellen Winslow were the 75th Anniversary picks. In recent years Tony Gonzales has smashed all the records and has a good shot at being one of the tight ends. Winslow was really the first of a new generation of "receiving tight ends" that is to say, guys not asked to block like the tight ends of the previous generations. Ozzie Newsome and Shannon Sharpe are also in that category, though both would give good effort in run blocking, they were not going to remind anyone of a Ditka or a Mark Bavaro in that department.

But Gonzales is the king of that type tight end and was injury-free (relatively) in his career and amassed near-Ruthian numbers for a tight end (7-times All-Pro, 14 Pro Bowls, 1325 catches for 15127 yards and 111 touchdowns. Winslow had a knee injury in 1984 and he came back from it but he didn't get to have a 12- or 15-year career, so he didn't compile the numbers he might have had he played as long as a Gonzales or Sharpe.

A wild card is current All-Pro Rob Gronkowski who has been First-team All-Pro four times (three consensus) in seven seasons. About the only time he's not All-Pro is when he's injured, which happens fairly often. If he can string together a few more seasons sans injuries and keeps up his current production he would be hard to ignore especially if he's challenging Gonzales's 11 touchdowns at the time.