Part V: Who Will Be On NFL's 100th Anniversary Team? 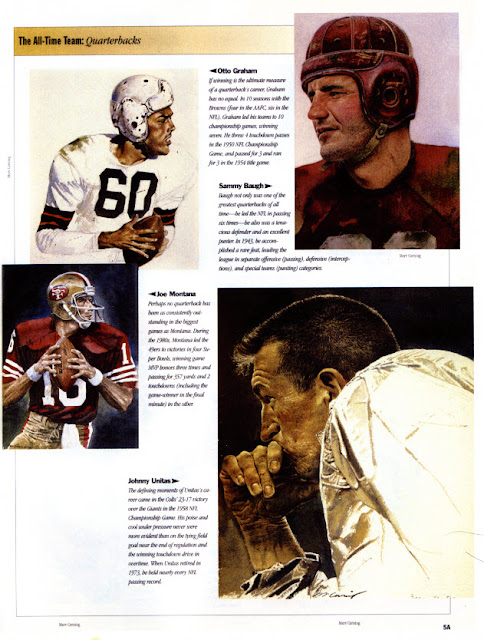 Will there only be four quarterbacks on the Century Team? Will prevail or will Sammy Baugh and Otto Graham keep their spots?

We suspect that Johnny Unitas and Joe Montana will rightly keep two of the slots. Unitas out Baugh and Norm Van Brocklin when the Half Century team was voted on in 1970.

We ask this because Tom Brady and Peyton Manning are waiting in the wings. We suppose, there is an outside shot, if Aaron Rodgers wins a couple of Super Bowls in the next few years he could enter into the conversation, Statistically, remarkable even in a world that includes Brady and Manning and Drew Brees. Rodgers currently has a 4 to 1 touchdown pass to interception ratio and if he keeps that up by the time this team is voted on he could have thrown his 400th touchdown pass before throwing his 100th interception. His touchdown percentage 6.4% just a hair below Graham's 6.4 mark and well ahead of Brady and Manning in that department. His interception percentage is 1.55 lowest in NFL History among qualifiers. His passer rating is well ahead of all the others. All he lacks is multiple Super Bowl rings. So, that will leave him out unless that fact changes in the next few seasons.

Since there will be great pressure to vote for the right ones we think whoever the voters are (the HOF selection committee or a select committee) they will do in-depth research to arrive at their votes (we think). One knock against Graham is that his first 4 championships (of a total of seven) were with the All-American Football Conference. Not that we necessarily agree, but there was never a merger with the AAFC and the NFL like there was with the AFL-NFL merger and therefore the AAFC records are not considered official, at least the NFL. The Pro Football Hall of Fame has always accepted is why when you read different publications Otto Graham's career statistics were different. However, we to NFL manuals and books published quite a long time ago and the distinction these days is much less.

Baugh was the first great T-formation passer and he was credited with six passing titles under the systems used when he was playing and he won two NFL Championships in his career. In some ways, his career parallels Peyton Manning's, i.e. of awesome stats (though they don't look like it by today's standards) and a couple of titles.

Graham's career is somewhat similar to Brady's stats were plenty good, but the key thing is the championships.

Clearly, we think, Brady will be on the 100th Anniversary Team, but we are not so sure about Manning though we think it is likely. If someone could be knocked out it would be Baugh. ( could be a two-way type team that Baugh could be on as a QB, punter, and defensive back, but that would be kind of a in our view.)

So, buckle up and prepare for another round of Brady versus Manning debates. Wins versus Stats. It's been around a long time and will continue for a long while.