Part II: Who Will Be On NFL's 100th Anniversary Team?

Yesterday we looked at special teams players who could possibly be named to the upcoming  NFL 100th Anniversary Team. 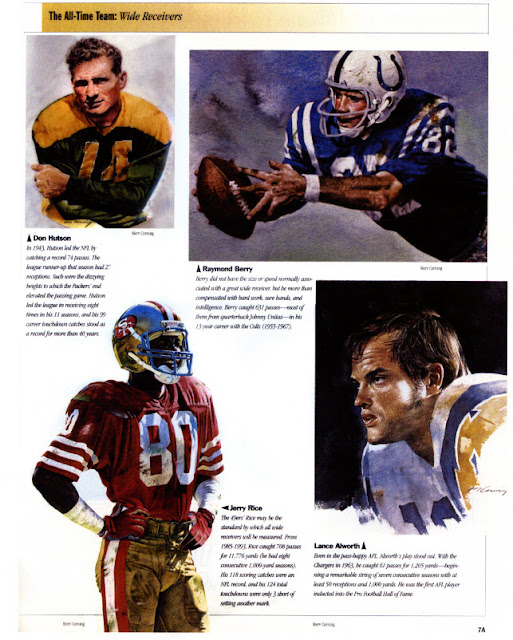 In a few years, Hutson and Jerry Rice are locks in our view. Raymond Berry and Lance Alworth are the two who could possibly be challenged. But by whom? Calvin Johnson was dominant for several years but he hung 'em up and didn't have the "compiling stage" of his career. That is the stage where wide receivers sometimes move from team to be, being productive but not stellar and compiling numbers to their career totals.

Randy Moss is, in our view, the most talented receiver ever in terms of physical ability:  size, speed, leaping ability, hands, smarts. He had it all. And Jerry Rice agrees.  However, he has a well-earned reputation of someone who was capable of loafing and his "I play when I want to play." solidified that sentiment. When things went poorly in Oakland he "dogged it". That is hardly the stuff of the best of the best, worthy of being on the 100th Anniversary Team.

This will be interesting because a second wave of the post-merger passing game began in about 1994 (the first was in 1978) where receivers and quarterbacks increased productivity in terms of passing and receiving numbers. Thus, players like Marvin Harrison, Terrell Owens put up stellar numbers in an era where they could run routes that were patrolled in the past by players like Jack Tatum and Ronnie Lott. So their numbers have to be looked at in context.

One player, who is now in his compiling phase is Larry Fitzgerald and he could garner some notice. He's a great hands player, who is a tough blocker and is an all-around receiver but he wasn't All-Pro very often and didn't lead the league Year-in and year-out in receiving categories like some of the above players did. So we will see.

Clearly, we don't know the voting results in 1994 when the 75th Anniversary Team was released but we wonder aloud how close Paul Warfield was, who was a first-ballot HOF inductee like Rice, Hutson, Berry, and Alworth. His numbers are not special but he played quite a few years in the "dead ball era" of Pro Football,— the 1970s. But anyone who saw him play knows he was a major key in the Dolphins championships of the early 1970s. Perhaps he will get a second look.

In a few years we will know.
Posted by John Turney at 1:02 PM