LOOKING BACK
By John Turney
TMZ reported that the former Seahawks defensive tackle Cortez Kennedy has died. Kennedy was 48 years old. Kennedy was an All-American at the University of Miami during the glory years of the Jimmy Johnson-coached 'Canes.  He was the third overall selection in the 1990 NFL draft and was the three-time All-Pro for the Seahawks (1992-94). He was also a Second-team All-Pro twice (1991 and 1996) and Second team All-AFC selection in 1995 and in addition, he was a Eight-time Pro Bowl selection (1991-96, 1998-99). He was also an All-Rookie selection in 1990.

He was the AP NFL Defensive Player of the Year in 1992 when he had 92 tackles, 14 sacks and 14 stuffs for an amazing total of 28 plays behind the line of scrimmage. It is worth nothing that the Seahawks were 2-14 in that season.

For his excellence, he was voted into the Pro Football Hall of Fame in 2012 and was a consensus First-team All-Decade selection for the 1990s. 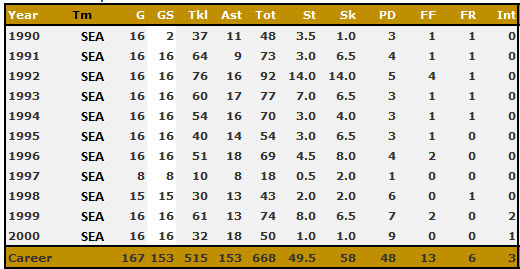 He totaled 58 sacks in his career and 49.5 run stuffs and batted away 48 passes. He was known as a supreme run-stuffing tackle that could also get good push in pass rushing situations.