Part III: Who Will Be On NFL's 100th Anniversary Team?

In Part II of this series we looked at wide receivers and in Part III we take a look at Centers and Guards. 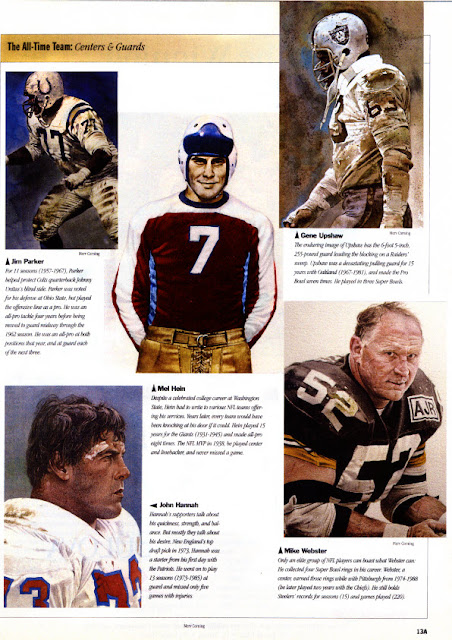 The top center, according to the 1970 Pro Football Hall of Fame voting committee was Chuck Bednarik and the top guard was Jerry Kramer. Neither was on the 75th Anniversary Team as Bednarik was supplanted by Mel Hein (who was a runner-up in 1970) and Mike Webster and Kramer lost out to John Hannah, Jim Parker and Gene Upshaw.

We suspect Hein and Webster will keep their slots (assuming there are only two). Though Dwight Stephenson could be looked at closely. Having seen both, a lot, we think Stephenson at his peak was superior. However, he was felled by a knee injury that ended his career. Webster was able to play 17 years and at his peak was a dominant player, just not quite as dominant (again our opinion) as Stephenson. Consider this:  The NFLPA used to have AFC and NFC Lineman of the Year Awards that were given annually and were result of polls of the defensive linemen of each conference. Anthony Munoz won it three times, but it was Stephenson who won it five consecutive seasons (1983-87) was was the height of Munoz's career. That's fairly impressive to us.

Hein is still the only offensive lineman to be an NFL MVP (1938) and his longevity and career honors should keep him in good stead with the voters.

Over the last 25 years, there have been excellent centers but none seem to have had the kind of dominant career that these others had so we don't expect any newbies here.

Larry Allen, we think, will take Upshaw's slot and rightly so.  He was just too big, too fast, too strong and had too many honors to not be considered one of the top three guards of All-Time. Steve Hutchinson stand out as the best guard in recent years but cannot see him cracking the top three.

Zack Martin is off to a great start in his career 3 First-team All-Pros in 3 years but he won't have enough seasons under his belt by 2020 in our view, to be one of the top three, but we could be wrong (see Rod Woodson's selection in 1994 which raised some eyebrows, not in quality but in longevity).