1979: When the Buccaneers Came of Age 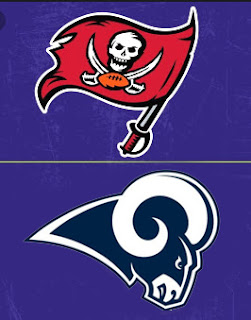 The Rams play the Buccaneers this Sunday and it will mark the 22nd time the two clubs have met with the Rams holding a 14-8 edge in the all-time series with Tampa Bay. (Including playoffs it will be the 25th meeting with Rams leading 16-8 overall and the Rams are 5-0 since 2012.)

In that game the Rams needed a fake field goal that was run in for a touchdown by holder Nolan Cromwell and a 68-yard pass from Pat Haden to Billy Waddy to build a 17-3 lead. They also broke Doug Williams' jaw on what Buc coach John McKay thought was a cheap shot and the Bucs had to play Mike Rae the rest of the game. 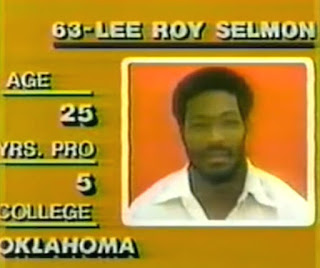 The Bucs defense stiffened and even though backup Mike Rae threw three interceptions the Bucs tied the game mostly by running for over 200 yards but the Rams pulled it out with a last-second field goal by Frank Corral.

The next year, in Tampa, the Bucs kicked the Rams butt. There is no other way to say it. The Rams scored on a pick-six from Jim Youngblood but the offense could not move the ball at all and the Rams lost 21-6, never scoring after the Youngblood score.

The Rams defense was tough, too, holding Doug Williams to the following stat line: 5/20 for 101 yards 2 touchdowns and 1 interception. The Bucs offense ground out 148 rushing yards on 45 carriers (3.2 average) but took up time and when there was an opening Williams hit two receivers for scores.
The NFC championship game was another slugfest which the Rams won 9-0. In the NFCCG Rams Pro Bowl tackle Doug France outplayed Lee Roy Selmon (who tore into France in the regular-season game) and this time the Rams held Buc quarterbacks to a stat line of  5/27 for 96 yards for no touchdowns and one pick. This time, there were not the two touchdown strikes by Williams (or Rae) make it close. Also this time the Bucs could only manage 92 rushing yards on 26 carriers (3.5 average).

But the Bucs proved an expansion team could get to a title game in its third season even though it was a flawed team, but it could run the ball an shut down good NFL offenses.

The next year, on ABC's Thursday Night Football the Bucs won 10-9 as the defense picked off Vince Ferragamo four times. Doug Williams was 10/23 for 97 yards and one pick.

The Bucs defense held the Greatest Show on Turf (GSOT) to 95 completions in 159 attempts for 1094 yards and 4 touchdowns matched with 12 interceptions and a defensive passer rating of just 57.5 and just an average of 19.3 points per game. They also held the Rams to 76.5 rushing yards a game, far below the standards of the GSOT.

They were game of and immovable object versus unstoppable force. And the Bucs defense proved to be the better of the two, although when it counted—when the Super Bowl was on the line the FRams offense made a play and advanced to the big game in Atlanta, beating the Titans for the title.
2019
This week we see a 3-0 Rams team versus a 1-2 Bucs team with a (so far) revitalized Ndamukong Suh who is now playing 3-technique rather than the nose tackle he played (poorly) for the Rams in 2018. Last year Suh had just .5 run stuff in 16 games for the Rams but this year already has 1.5 run stuffs in three games. He's just not a nose tackle and he's still a good 3-tech.
Nonetheless, the Bucs defense is allowing just 69.7 yards rushing (and a 3.0 YPA) and their defensive passer rating is decent, too, but their overall passing defense does lack, giving up too many yards in two of it's three games. Maybe this 2019 iteration of the Buccaneer defense is not on the level (yet) of the 1999-02 Bucs or the 1978-80 Bucs but it's been good so far.
So, the Bucs facing Jared Goff and Todd Gurley they are facing a challenge, especially with the Rams receiving trio of Cooper Kupp, Robert Woods, and Brandin Cooks. Suh and Lavonte David may indeed slow the running game and put the Rams into passing situations and then it comes down to which Jared Goff the Bucs will see. 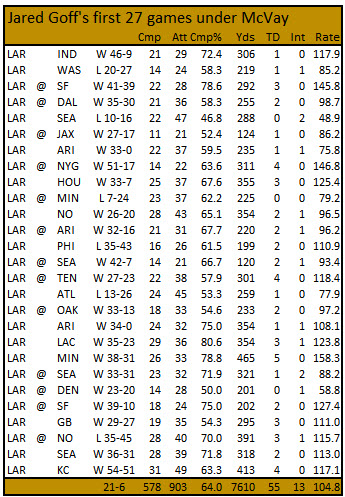 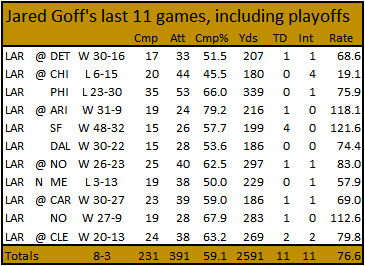 The good news is through that minislump the Rams were 8-3. However, have teams caught up to the Rams offense? Does facing a 6-1 front bother the McVay scheme? Is a dinged Gurley and missing Kupp late last year bother Goff inordinately?

However, another factor is the Rams defense is playing very well. The run defense is okay, nothing stellar but the Ram defensive passer rating is 66.2 (2nd in the NFL behind the Patriots) and they are fifth in passing yards allowed and second in fewest passing touchdowns allowed.

The Rams have two base defenses (one with Cory Littleton and Brit Hager as the ILBers and 2 CBs and 2 safeties and one with Littleton and John Johnson as the LBers and playing with three corners and one safety.) and they also have a solid nickel defense with Clay Matthews and Dante Fowler as edge rushers, Aaron Donald and Michael Brockers rushing inside and rookie Taylor Rapp and Littleton as the 'backers.
This early in a season it is hard to evaluate if the numbers we are seeing are legit because with only three games as a basis the numbers could be skewed. But if things are relatively as they seem it's a good matchup and one that peaks enough interests to draw some comparisons to the rivalry that centered around 40 years ago and 20 years ago.
Posted by John Turney at 12:40 AM