By John Turney
For years I have seen Pro Football Focus (PFF) put out individual grades the on Monday, these are the grades or scores they have been known for since 2006. I couldn't help but notice that the All-22 films available now on Gamepass didn't become available until Tuesdays, sometimes late Tuesday.

But somehow PFF was confident in their grades even though the TV views didn't always show the full field. I know this because on key plays I've gone through the replay, commercials and all with the plays not marked to find keys plays to post on here or Twitter. I would have loved, LOVED to have had the All-22 to see who made the great play or the key error. But it wasn't possible.

So, I did the wrong thing, I picked a fight with a PFF poster on Twitter, suggesting that they had not seen the All-22 and therefore couldn't support their conclusions. It's likely I was wrong in my challenge but I really wanted to know if PFF was getting the All-22 early.

A couple of years ago I was told their Monday morning grades were based on the TV view but I found that hard to believe, that they'd release grades, especially on defensive backs, and linebackers on the TV view. But two very credible people connected to the NFL said that was the case.

I had no way of knowing but I also thought it was possible that PFF was getting the All-22 (unmarked likely) earlier than other media (or subscribers). So, in the middle of the ugliness, I started (wrongly I might add) Sam Monson (Director of Consumer Ops at PFF) implied in a Tweet that the person I was involved with in the BrewHaHa had access to the All-22

Hmm. I replied with this: 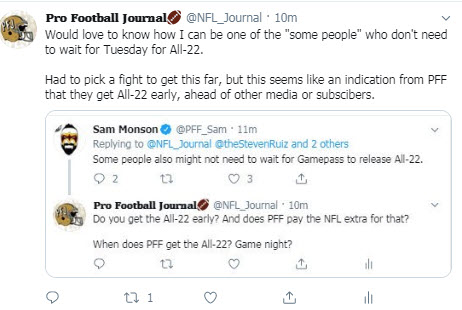 Since then I have not received an answer to any questions. It's Twitter silence on this thread.

So, I don't know the answer. It's possible that Monson was trying to bolster his coworker's cred by suggesting he HAD seen the All-22 when he hadn't, i.e. that his co-worker has to wait until Tuesday until the rest of the NFL fandom can get it.

Or Monson was telling the truth, that "some people also might not need to wait for Gamepass to release All-22".

Anyone know? If it is the former, well, that's just a Twitter fight and means little. Call it a "bluff" on Monson's part. I was ugly earlier on Twitter, I used the term "fraud" in relation to this and grades based on television view. I will embarrassingly backtrack from that and say that was too strong.

However, if it is the latter then there are some questions I would love to have answered—
1. Does some media (they are not just a stat company they have content that is qualitative, not just quantitative) get preferential treatment by NFL/Gamepass?

2. Is that available to all media? Some? A select few?

4. Does PFF (if they don't have to wait 'till Tuesday) pay for that privilege?  Remember even though it's Twitter voices carry, Mr. Monson.

Just looking for answers. We clearly know they get paid by NBC (and perhaps others) and that Cris Collinsworth gives them plenty of mention (at one point and perhaps still Collinsworth had/has a financial interest in PFF but I think we deserve to know if one outlet gets a crack at the All-22 before the others.
Posted by John Turney at 2:21 PM