By Eric Goska
“Slow start, spin again,” was at one time the message found on the space following start in Milton Bradley’s board game of Life. Those who twirled the dial and emerged with a one on their first spin – the lowest number possible – were required to try again.

No such option was afforded the Green Bay Packers Thursday night in . When its offense put up a negative number in the first quarter, the team was forced to live with it.

The NFL kicked off its 100th season at Soldier Field with a prime-time showcasing of its oldest rivalry: Packers-Bears. triumphed 10-3 in a low-scoring affair reminiscent of the league’s formative years.

The much-hyped event also served as the coaching debut of one Matt LaFleur. In January, the 39-year-old native of became the 15th head coach in Packers’ history.

One wonders what LaFleur would have done had he been offered a do-over at the end of the first quarter. Might he have opted for another spin given his offense was stuck in reverse?

The Packers’ three drives in the opening 15 minutes ended almost before they started. Each time the team went three and out, traveling minus-10, minus-7 and five yards.

’s first possession lasted one minute, 59 seconds. Bears linebacker Roquan Smith knifed into the backfield to knock down Aaron Jones at the line of scrimmage. Smith then dropped the running back for no gain on a pass from Aaron Rodgers. On third down, defensive end Roy Robertson-Harris overpowered guard Lane Taylor and sacked Rodgers for minus-10.

held the ball for 1:46 on its second try. Rodgers’ first-down pass bounced incomplete into the turf and tight end Jimmy Graham’s shoe almost at the same time. Jones came away with nothing after getting dumped by linebacker KhalilMack. Rodgers was again sacked on third down, this time by linebacker Leonard Floyd for minus-7.

The Packers abandoned the run on their third outing which clocked in at all of 56 seconds. Despite starting at the 40 as the result of a Bears kickoff going out of bounds, Green Bay continued to sputter as Rodgers threw too low for Davante Adams, connected with the wide receiver for five yards, and then missed him near midfield on third down.

J.K. Scott ended each failed enterprise with a punt.

Negative first quarters are rare for the Packers. When they do occur, however, they don’t always foreshadow a loss.

Thursday in was the 11th time since 1942 that has finished with fewer than zero yards in an opening quarter. The team is 5-6 in those games.

The Packers last started underwater on Dec. 14, 1986. After producing minus-3 yards on eight first-quarter plays in , the team rebounded and dispatched the Buccaneers 21-7.

The Green and Gold’s worst opening quarter in the previous 76 years took place on Oct. 26, 1975, in . The team generated minus-19 yards on six plays and succumbed 16-13 to the Steelers.

last began on the wrong side of zero against the Bears most probably on Sept. 29, 1946. Ted Fritsch gained little and Herman Rohrig went backward to produce minus-1 yards (unofficially) on three rushing attempts. romped 30-7.

Of course, misfiring early can be demoralizing. The best remedy is to shrug off such sluggishness as quickly as possible.

did just enough in the final three quarters to subdue the Bears. Rodgers and Graham connected on an 8-yard scoring pass early in the second quarter. Mason Crosby booted a 39-yard field goal with 5:15 left in the game.

Thanks to a tremendous defensive effort, those two scores carried the day. The Packers last beat the Bears with 10 or fewer points on the road when they triumphed 2-0 on the strength of a Tom Nash safety at Wrigley Field on Oct. 16, 1932.

Over the course of the final three quarters Thursday, the Packers produced 225 yards of offense on 48 plays (4.69 per play). The Bears collected 212 yards (4.42) on the same number of snaps over the same span.

’s early struggles followed on the heels of a preseason in which the team rarely played its starters. Just how much that approach contributed to its rustiness is a debate that will surely continue.

What we know with more certainty is that LaFleur’s first quarter was likely the least productive season-opening period in franchise history. It surpassed the minus-9 yards the Packers managed on three plays in a 19-14 loss to the Rock Island Independents to kick off the 1922 campaign.

Negative yardage aside, LaFleur’s opening act will long be remembered for a far different reason. In taming the Monsters of the Midway, LeFleur joins Gene Ronzani, Vince Lombardi and Dan Devine as the only head coaches to have defeated the Bears when meeting them for the first time

Extra Point
For the first time ever, the Packers (47 yards) and Bears (46) both rushed for fewer than 50 yards in the same game.

Negatively Charged
Since 1942, the 11 games in which the Packers have generated negative first-quarter yardage. 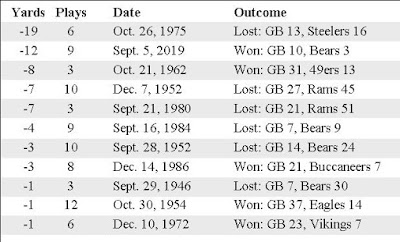