In the third quarter of the Raven blowout of the Dolphins, there was a neat little coverage we'd like to show. It was third and fourteen. Here is the personnel. It's a 6-1 look with dime personnel—there is a nickel (#24) and a dime (#41) back with two corners and two safeties deep. The nickel is a cornerback (Brandon Carr) and the dime is a safety (Anthony Levine). The three-technique to the right is fullback Patrick Ricard—#42. The rest are linebackers #99 Matthew Judon, #90 Pernell McPhee, and #48 Patrick Onwuasor who is the "MIKE" and  #56 Tim Williams. So, to sum up there are four linebackers, one fullback, three safeties and three cornerbacks on this package.

But, to be fair, Judon and McPhee and Ricard have also been called defensive linemen, depending on what year and in many fronts they still are but it can also be said this is a no-lineman package so eat your heart out Fritz Shurmur! 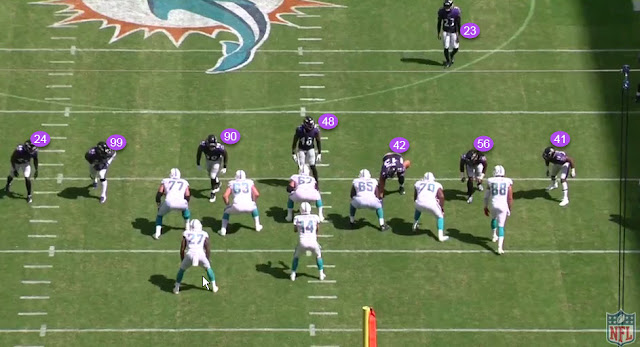 Here are the stills of the play. As we can see it's a 6-1 look with the Mike 'backer "mugging" the line of scrimmage and the secondary showing a Cover-2 "shell". 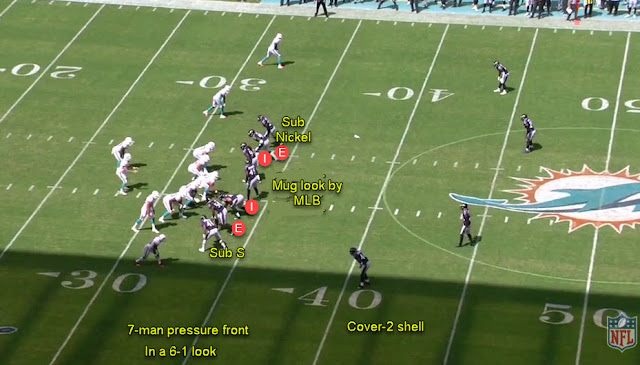 The Dolphins see the 7-man pressure possibility and block with seven, (max protect). The Ravens rush only five, with the dime safety and the Mike dropping. The nickel back rushes. 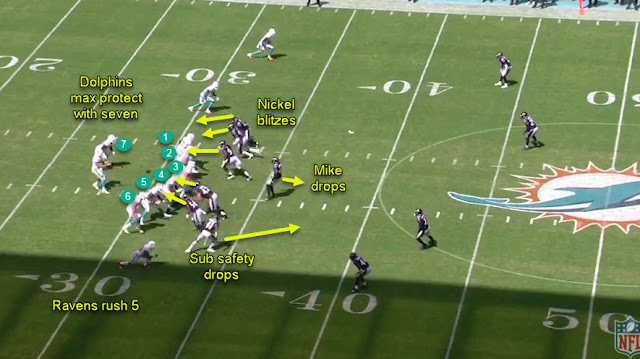 What is interesting is the dime safety drops all the way to the last line of defense, the middle 1/3 of Cover-3 about 25 yards or so from the line of scrimmage. Clearly, the Ravens showed Cover-2 and are playing cover-3. The Mike plays the middle, the free safety springs to the curl/hook/flat to the field side and the strong safety does the same to the boundary. The corners drop to the deep outside thirds with the aforementioned dime safety heading to the middle third zone. 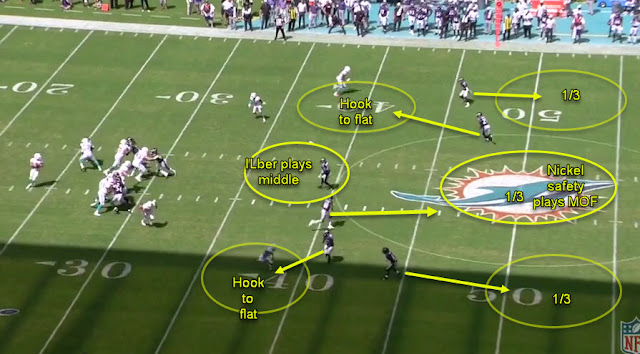 The dime safety is right at the tail of the Dolphins looking at the quarterback while dropping. 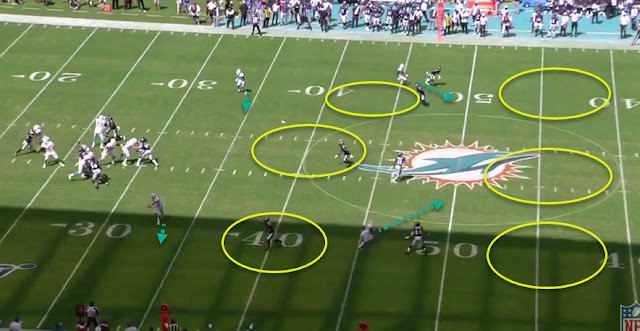 The nickel safety (Anthony Levine) sees the ball is going to the post to the boundary side and helps double that route.

The ball is an overthrow, but also it was well-covered.

Yes, there was am offensive explosion by the Ravens, but the defenses by Don "Wink" Martindale were very effective as well.
Posted by John Turney at 9:01 PM