Review: Red Grange: The Life and Legacy of the NFL's First Superstar 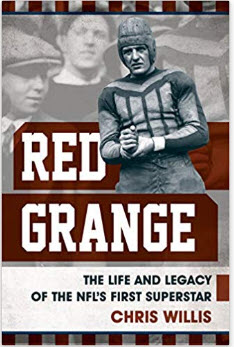 Red Grange: The Life and Legacy of the NFL's First Superstar by Chris Willis is published by Rowman & Littlefield is every bit as good as I'd had hoped. With football season starting in earnest tomorrow this book is perfect for folks who want to learn about the NFL's first superstar. It is author Chris Willis' seventh book.

Chris Willis has worked at NFL Films as Head of the Research Library since 1996 and is a producer there as well. His first book, Old Leather: An Oral History of Early Pro Football in Ohio, 1920-1935, was published in 2005 and was given the 2005 Nelson Ross Award by the Professional Football Researchers Association for recent Achievement in Football Research and Historiography. His second book

The amount of materiel included the Grange book is impressive. Willis, over a period of twenty or so years, collected newspaper clippings, books, magazines, ads, game footage, Hollywood items and many more things to make this the definitive work on Grange's life—pre-football, college ball, pro football, and post-football.

Willis, as per usual, collected interviews from family members and descendants of his coaches and family to gain never-before-known information and stories.

Willis weaves together of a player than any modern player would love to emulate in terms of total impact—The Grange legacy if you will.  The Grange legacy is that he gave the modern player a blueprint in what a modern player can do (leave school early, sign with an agent, earn big contract, earn big-dollar endorsements, appear in Hollywood movies, coaching, entering into sports broadcasting, win two NFL Championships, and elected into Pro Football Hall of Fame). 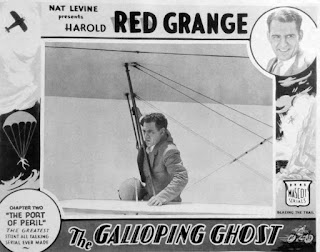 In the subsequent years, many players have followed into those footsteps. Players like Joe Namath, Howie Long, Deion Sanders, all (to varying degrees) followed in the archetype of Grange.

With clean prose, the book is chronologically organized starting from Grange's "Humble Beginnings" and covering his young life and the beginnings of his athletic prowess in high school in Wheaton, Illinois.
It then goes over the University of Illinois years and his All-American career there and his leaving of school to turn pro. It covers the signing of Grange by agent C.C. Pyle and the three barnstorming tours with the Chicago Bears. Yes, three. You thought there was one, or perhaps two, right? No, there were three and they are covered in great detail by Willis.

Willis gives new information (as lest to us) about the forming of the first American Football League (AFL) and the New York Yankees that he started on for a couple of seasons.

Willis then returns us to Grange back with the Bears and the teaming with the great names of the late-1920s and early-1930s such as Bronko Nagurski and Bill Hewitt and the beginning of playoff football in the NFL. This section could almost serve as a history book on the 1930s Bears alone.

It covers the transition into coaching and broadcasting and also Grange's marriage in the late-1930s. The book has two sections of photos, some we'd not seen before, a long section of endnotes and a thorough bibliography.

We highly recommend it and appreciated the sheer volume of the knowledge Willis dropped in it.

You can get it at Amazon.com HERE.