Greg Zuerlein—King of the Long-distance Bombers 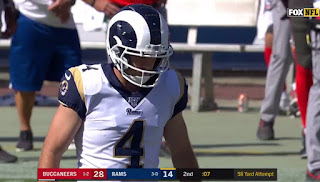 Yesterday, in 55-40 loss to the Tampa Bay Buccaneers, Greg "The Leg" Zuerlein lived up to his nickname by nailing a 58-yard field goal before the half.

It was his tenth field goal of 56 yards or more made (in 18 attempts) breaking him out of a tie for the most 56-yard+ field goals in NFL history. Sebastian Janikowski has 9 (28 attempts) and Matt Prater also has 9 (12 attempts) field goals of that distance or more.

His percentage of .556 is not as high as Prater's but keep in mind Zuerlein has six attempts of 60 or more yards with two makes (Prater is 1/1 from 60+—his NFL-record 64-yarder). But overall, Zuerlein's 'degree of difficulty' has been higher—though GZ was indoors from 2012-15. 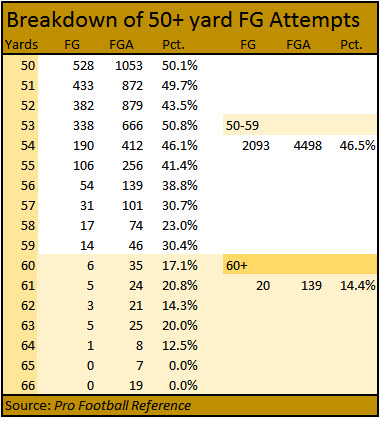 Perhaps we should have chosen 55 yards because from 54 to 55 it seems there is a break (almost 5%) in accuracy but we though 56 yards separates the men from the boys.

Others (and we wish they would) could do a further study, using indoors/outdoors, weather conditions, etc. But in 7¼ seasons Zuerlein has shown he does have the "The Leg".
Posted by John Turney at 8:18 AM