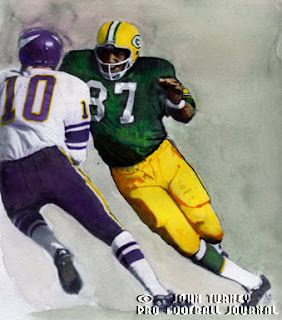 We were saddened to read the news of Willie Davis' passing today. Not only was he a great NFL player he was one of the NFL's great gentlemen. Nicknamed “Dr. Feelgood” because he was always in a good mood, always in a positive mindset according to his teammates.

He began his career with the Cleveland Browns in 1958 (after being taken as 15th-round draft pick from Grambling) as a defensive end and the following season he played offensive tackle. He was planning to go into teaching and coaching at the high school level when he found out he was traded to Vince Lombardi's Packers for receiver A.D. Williams. He simply was not pleased with being traded to what he considered the NFL's "Siberia". Bit Coach Lombardi, on a phone call, convinced Willie that there were good things going on in Green Bay and Willie reported.

For there, as they say, it was history.

Davis was the left defensive end for that 1960s packer dynasty starting every game for the Pack in the 1960s that went to six title games, winning five in including the first two Super Bowls.

Along the way, he was a consensus All-NFL five times and a member of the  NFL's 1960s All-Decade team as well as the Combine 1960s AFL-NFL team and was voted into the Hall of Fame in 1981.

Though records are partially complete, Pro Football Journal's research shows Davis was among the best sackers of his era totaling 9½ sacks in 1961, 13 in 1962, 8½ in 1963 (likely a few more, that missing records thing). In 1964 at least 14½, again likely a couple more, 11 more in 1965 and probably as high as a half-dozen more. The Packers play-by-play man sometimes didn't record forced fumble plays as sacks, so a review of film may be the only way to resolve this issue). His final years are pretty much complete with 11, 11, 9 and 6 sacks. 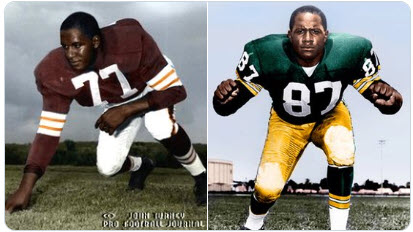 Records from 1958 in Cleveland do not exist and in 1959 he played offensive tackle so he didn't have any that season but we have seen some film of 1958 and he did have some tackles on the quarterback, the question is how many.

Thus, we are sure he had over 100 sacks, and likely a bit more. Maybe Dr. Feelgood can review the records in Heaven and let us know the exact number!

Former Packers center Bill Curry called him "the finest combination of leader and player that I ever saw."

As great as Davis was on the football field, he was as much, if not more of a success after his career off the field. He earned an MBA and was extremely successful in business. His perseverance in sports, he felt, gave his the ability to meet challenges and take advantage of opportunities as they came in life and in business.

Willie owned beer distributorships founding Willie Davis Distributing in 1970, which distributed Schlitz along with other beer brands, and All-Pro Broadcasting, which now owns several radio stations, six years later. He also served on the boards of directors of several Fortune 500 companies including the boards of Dow Chemical, MGM Resorts International, Schlitz Brewing, Sara Lee, American Express, Mattel—and the Green Bay Packers.
In addition to his business ventures, from 1970-75 Davis volunteered to coach the defensive line for the College All-Stars in the annual game between the best of the college players and the reigning NFL champions coaching the likes of Randy White, Jack Youngblood, Cedrick Hardman, Mike Reid and gave them a little advanced training as to what being an NFL defensive lineman would be like. 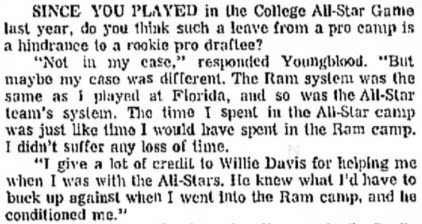 Additionally, Davis was a color commentator for NFL games on NFL from 1970 through 1975 usually partnering with Ross Porter.

Davis was born in Lisbon Lousiana but was raised in Texarkana, Ark. He was raised by a  single mother after his father left the family when Willie was eight leaving the family poor. Davis said his mother often told him, "'I want you to go to school, get an education, get a good job, and be a better man than your father."