The Rams defense set a few small records, but overall it was one of the better performances in Rams franchise history today in a 30-10 win versus Washington.

Aaron Donald had 4 sacks, talking him to 79.5 for his career, surpassing Joe Greene on PFJ's sack list, and tying his own team record (shared with Sean Gilbert) for most sacks by a defensive tackle in a single game.

Inside linebacker Troy Reeder fell into three sacks of his own, setting the Rams record for most sacks by an inside/middle linebacker in a single game in team history, and that goes back to the late-1950s at least.

Previously inside 'backers Cory Littleton, Will Witherspoon, and London Fletcher each had a game with two sacks (the latter two had two each). In fact, Reader puts himself in very rare company of inside linebackers with three sacks in a game.

Exactly how many (since 1982) is debatable since some of the players on the 3+ sack list were inside linebackers in base defenses and edge rushers in nickel (such as Chad Brown, Charlie Clemens, Mathias Kiwanuka, and others). Still, Reeder is etched in the record books with the likes of Jack Lambert and Mike Singletary and other inside linebackers who each had three sacks once each. So there is that.

The eight sacks the Rams amassed today are tied for 12th for the most sacks in a game (since 1963) in franchise history.

The Rams allowed 38 yards rushing, which is tied for 36th all-time in Rams history (since 1940)—
The Rams also allowed just 70 yards passing, which is tied for 40th all-time.
Of course, tying for 36th and 40th in rushing and passing does not sound all that impressive but when a defense does it on the same day, it IS impressive. The total for 108 yards tied them for 12th all-time in fewest yards allowed and that included a minus six yards in the second half. Yes, Washington gained 114 yards in the first half and ended the game with 108.
The had five drives that ended in negative yards for Washington and a total of eight three-and-outs. Eight. 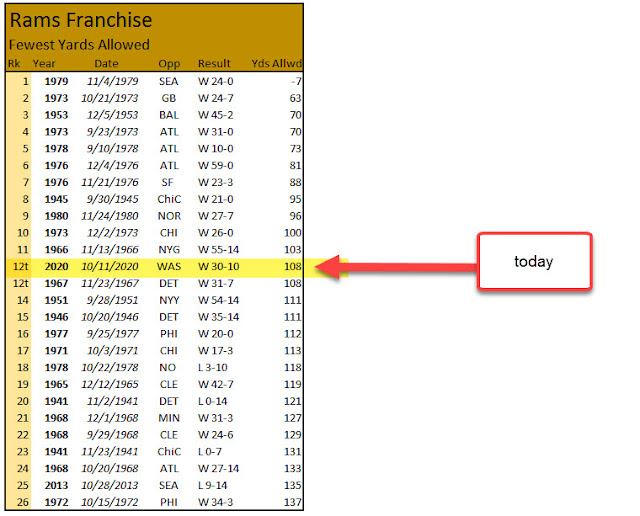 So, after five weeks the Rams are 5-0 and are getting to the passer often (only five times have Rams teams done better through five weeks) and their 81.3 defensive passer rating is excellent given this era.

Run stopping is not terrific, but it can be said that Brandon' Staley's defense is becoming very effective. 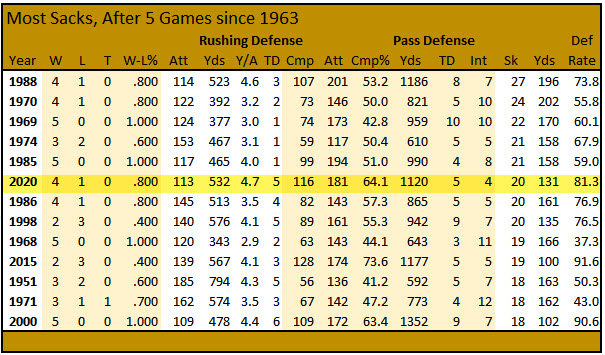 Edited 11:58 PM, 10/11: In reviewing Donald's fourth sack, the ball slipped out of Smith's hand and Donald' didn't touch it or Smith, but he did force the right guard into Smith. We would not be surprised if this goes down as a team sack rather than a Donald sack when the league reviews the tape.
We will keep you posted.
Posted by John Turney at 2:42 PM