Doak Walker for the Hall of Fame!

Re-making the case for Doak Walker

The recent passing of Chicago Bears legend Gale Sayers inspired an outpouring of remembrances and accolades, with the Kansas Comets’ story and greatest moments flashing on nearly every NFL league and fansite on the internet.  Sayers was rightfully hailed as one of the best running backs to ever play the game.  The statistics clearly bear this fact out, but a review of his countless highlights, many of which can be described as breathtaking, leaves the viewer with no doubt that Sayers’ name belongs in the pantheon of runners that includes Brown, Sanders, Payton, and the other all-time greats.

Not surprisingly, Number 40’s passing reignited the debate over whether Sayers, whose career spanned a mere seven seasons (of which maybe five could be considered complete) and only 68 games truly belongs in the Canton’s hallowed halls.  The doubts are not likely to emanate from serious historians of the game but usually come to light when some neophyte tries to make a point about Sayers’ short career without putting the man’s complete body of work into context or having seen him live or on film.  I am fortunate enough to say I have seen him both live and on film and will attest to his greatness.

Of course, the Sayers debate inevitably moves the next target squarely to the back of one of my personal favorites, Detroit Lions halfback Doak Walker, who made the hall of Fame in 1987 despite playing one game less than Sayers.  It is hard to defend Walker’s enshrinement when one looks simply at his short career (67 games, six seasons) with no 1,000-yard seasons, and never leading the league in rushing.  Yet, every time this debate resumes, I find myself going back to Lions’ game films and old episodes of Time For Football and my opinion that Walker belongs becomes more firmly reinforced.

So I thought I’d take this opportunity to restate Walker’s case for the Hall of Fame, using some obvious arguments as well as shining some light on accomplishments of which his doubters (which include the legendary Paul “Dr. Z” Zimmerman, a football writer for whom I have unbounded respect) have either overlooked or simply ignored. 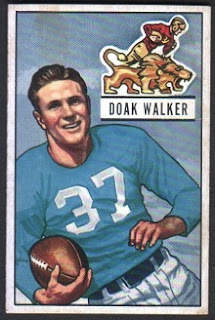 OK, the obvious…Walker came to the Lions in 1950 after three All-America seasons at Southern Methodist University, including a Heisman Trophy season in 1948.  The Dallas, Texas native was the Lions’ main left halfback from 1950 through 1955.  During those six seasons, the Lions appeared in three NFL championship games, winning two.  Walker was voted to five pro bowls and earned four All-Pro selections.  He was named NFL Rookie-of-the-Year in 1950 after finishing fourth in all-purpose yards (1,262) and leading the league in scoring with 128 points (in a 12-game season!).  Walker doubled as the team’s kicker and led the NFL in extra-points-made twice and overall scoring twice.  Walker was also returned punts and kickoffs and played defense when needed.  At the time of his retirement after the 1955 season, Walker ranked third in NFL history with 534 regular-season points.  Only Green Bay’s Don Hutson (825) and Los Angeles’ Bob Waterfield (573) had more points than Walker. 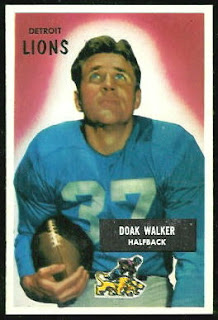 Now let’s look a little deeper into the Doaker’s numbers.  Yes, he did not play many games in his career, but he certainly made the most of his time.  In a close examination of his stats, there are some astounding things that pop out.  There have been many fine pass-catching running backs over the years, but for this man’s money, Walker was the best at it.  It could be argued that Walker pioneered the use of the running back as passing weapon.  Since 1950, Walker’s rookie season, no one has posted a better career yards-per-catch average than Doak (16.7).   In fact, only one player, Clem Daniels, comes close (16.3).  After Daniels, the next man, Ray Mathews, comes in nearly one full yard off Walker’s pace.  The top 40 is listed below (This list is not purported to be inclusive but rather illustrative) …

When charting the best Yards-Per-Catch seasons by running backs since 1950, Walker, though not coming in first, dominates the list with two of the top five best seasons and placing five in the top 30 (more than any other back)!   The top 50 are listed below …

Another astonishing statistic shows that Walker was the most efficient pure running back out of the backfield in league history, scoring a touchdown once every seven times he caught a pass (7.2, to be exact).  The next closest man is Clem Daniels at 8.5, nearly a catch and a half off Walker’s pace.

So, there it is.  Short of showing a bunch of scratchy old films from the venerated vaults of Mount Laurel, I believe the case for Doak Walker’s enshrinement in the Pro Football Hall of Fame is undeniable, regardless of the length of his career. 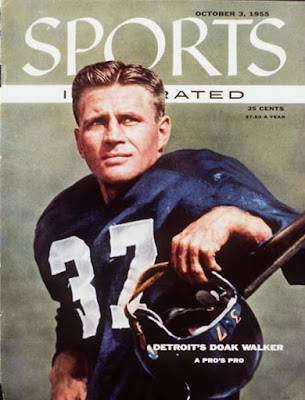 Doak Walker appeared on the cover of
Sports Illustrated, October 3, 1955

PS – After this little exercise, I think it might be time for the HOF voters to re-examine the case for Clem Daniels!

Thanks to my good friends Coach TJ Troup and John Turney for passing along some very useful stats and insight as I prepared this piece!