Yet Another Sad Day—RIP Matt Blair 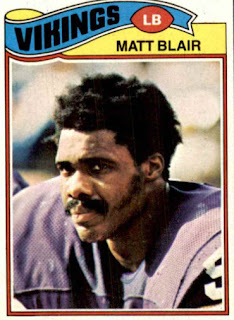 Viking great Matt Blair passed away today at the age of 70. Blair had been dealing with complications from dementia in recent years but the immediate cause of death was not announced the Star-Tribune reported.

He was drafted by the Vikings in the second round (51st overall) of the 1974 NFL Draft. out of Iowa State. He played a dozen seasons in the NFL, all for the Vikings. After football, he became a wildlife and landscape photographer.

In July of 2019 Proscout, Inc. named him one of its most worthy players not in the Hall of Fame based on their over forty years of scouting NFL players. That same year we named him the fifth-best kick blocking artist of all time.  That same year we listed him as the sixteenth best 4-3 outside linebacker ever.

Blair was a rover at the University of Iowa (after transferring from Northeast Oklahoma Junior College) and was considered by the school as one of its greatest defensive players in history. He was a two-year letter winner and played on ISU's 1971 Sun Bowl team.  After sitting out the 1972 season with a knee injury, he rebounded with a fine senior campaign in 1973 in which he earned All-America honors, tallying 77 tackles, one interception, and three fumble recoveries, three forced fumbles and was invited to play in the Hula Bowl, East-West Shrine Game and the Senior Bowl. He was inducted into the Iowa State Athletics Hall of Fame in 1999.
God speed, Mr. Blair.
Posted by John Turney at 5:23 PM