TUESDAY TIDBITS: "The Art of the Takeaway" 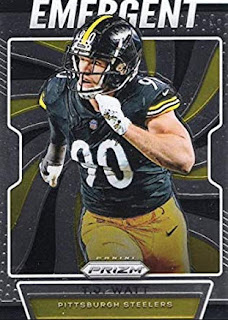 Have been reading, and or subscribing to Sports Illustrated for about 60 years, and there have been many articles that have been a joy to read. Eventually, the "bar was set high" when Paul Lionel Zimmerman began writing in 1979.

Though there are many fine writers, for me he was the best-ever pro football writer. Later this month he would have turned 88. Yesterday received my latest issue from SI, and Ms. Jenny Vrentras has an article that is a MUST read.

The Art of the Takeaway details T.J. Watt of the Steelers, and even has a graph titled takeaways gone away. Offensive coaches want to score, and of course, this means advancing the ball downfield. Still maintain football is a territorial game. Simplistic yet accurate, you can't score on offense if you keep "giving" the ball away to the other team, and as such in the evolution of the offensive philosophy....don't turn the ball over. We win, and I keep my job.

For the folks out there that have played this game on defense and ever forced a fumble or intercepted a pass there is a special feeling when you return to the sideline. Offensive coaches and their minions(players) don't like seeing opposing defensive players have that special feeling.

So, ms. Jenny—a job very well done, and hope all of you check it out. One of the ways to take the ball away is the strip-sack, or forced fumble on a pass rush, and that takes me to my historical game of the week.

The Chicago Cardinals left for St. Louis in 1960, and played solid football for two years, then struggled in '62 under new coach Wally Lemm. Entering 1963 he really believed he would make a difference in the eastern conference race and had victories over the contending Steelers, Browns, and Giants over a seven-week period. October 4th, 1964 the 2-0-1 Cardinals continue their long road trip (five consecutive to start the season) by going to Washington to play the Redskins.

The box score at Pro Football Reference lists the Cardinal defense with 9 sacks for 71 yards in 23-17 win. Starting at left defensive end was Tom Redmond (Pro Football Reference did not list Tom with any starts, shame on you PFR for not doing your homework). Redmond on an outside pass rush gets his left hand up and tips the pass.

Left corner Pat Fischer nabs the wobbly throw and high tails it to the end zone. During the game Redmond records two sacks, and since Chuck Drulis believed wholeheartedly in the "blitz" here come the Cardinal linebackers. Meinert,  and Koman both record sacks, and getting significant playing time today is back-up outside linebacker Marion Rushing who gets 3 sacks. Fourth-quarter, and George Izo is in at quarterback for the 'Skins, and in attempting to pass from his own end zone is tackled for a safety. 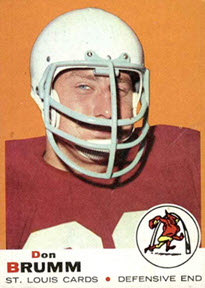 The Cardinal highlight film states it is defensive end Don Brumm, but in reality, and recorded accurately by the league it is Marion Rushing. He is not credited with a sack however? Wonder if Ms. Jenny Vrentras would like to see the film? St. Louis would go on to have their best year since 1948 with a 9-3-2 record, and a defense that recorded 39 takeaways, and 39 sacks.

Each week another all-time great leaves us, and recently that all-time great was pitcher Bob Gibson of the Cardinals. No, am not going to detail each game he pitched, yet here are a few aspects about his career. His athleticism was very special, and his competitive nature coupled with his work ethic there was no doubt he was going to be great. 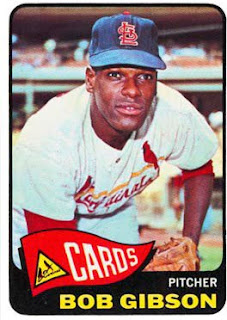 Gibson overcame early wildness (led the league in walks in 1961), and as he developed a repertoire of pitches he became one of the best in the National League. Researched how he did against the master—Mr. Sandy Koufax, and they faced off just five times during the early to mid '60's. Believe that Koufax is the best ever, and in those five games Sandy allowed four earned runs in 39 innings (0.92 ERA). Gibby allowed sixteen earned runs in 40 innings (3.6 ERA). Bob had a losing record against the Dodgers in his career, but simply dominated a number of the other teams in the National League. 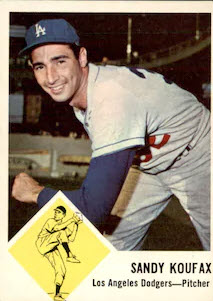 Only saw him pitch in person once ('67 all-star game), and he was very sharp that afternoon. The game I remember best though was opening day in '71, and my favorite pitcher of all-time Ferguson Jenkins and Gibson head to head. The ten inning game took 1 hour and 58 minutes.

Those men did not waste time, thus they toed the rubber, fired, and got men out. Bottom of the tenth and Billy Williams lined a rocket to right-center to win the game 2-1. Williams was one of the few who actually hit Bob well. Billy hit the most homers with 10, had 31 RBIs and the most walks allowed by Gibson with 24. Bob had much more success against right-handed hitters, including Mays & Aaron (you might have heard of them?). Tim McCarver was an adequate baseball announcer, but boy oh boy when he told a Gibson story he sure had my attention, and many of those stories explained what Hall of Famer Bob Gibson was all about.