Green Bay Forced to Walk the Plank in Tampa

If what passed for football in Tampa was a harbinger of sorts, the Green Bay Packers’ season is in jeopardy.

If the debacle was merely a hiccup – and a giant one at that – the team would do well not to dwell and move on.

Call it a slap in the face. Call it a rude awakening.

Call it a stark reminder of how quickly the script can be flipped.

The Tampa Bay Buccaneers turned the tables on the Packers Sunday and pummeled them 38-10. Whatever they lacked in the first quarter, the Buccaneers more than made up for it in the next 15 minutes.

How’s this for a start by Green Bay? In the opening quarter, it piled up 144 yards to the Bucs’ 22. It amassed nine first downs to Tampa’s one. It controlled the ball for 12 minutes, five seconds and built a 10-0 lead.

Sitting pretty? Well, it got downright ugly from there.

In the second quarter, Tampa ripped off 131 yards to Green Bay’s five. They engineered a 10 to 1 edge in first downs.

Most concerning, they exploded for 28 points to all but salt away the game.

Throughout his 16-year career, Rodgers has been superb at avoiding interceptions. Coming into this season, he had the lowest interception rate (1.38 percent) in NFL history based on 84 picks in 6,061 attempts.

No. 12 hadn’t thrown more than one in a regular-season game in nearly three years. The last time he did so (three) came in Carolina on Dec. 17, 2017, in a return from a broken collar bone.

As for pick-6s, with Rodgers those come around about as often as Halley’s Comet. He threw his first in Tampa Bay in 2009 (Tannard Jackson) and his second against the Bengals in 2017 (William Jackson III).

In between, he fired an NFL record 3,907 passes without one.

Since that narrow win (27-24) over the Bengals at Lambeau Field in 2017, Rodgers had again steered clear. He was at 1,456 attempts without a pick-6 and counting when cornerback Jamel Dean commandeered a pass intended for Davante Adams and raced 32 yards for Tampa Bay’s first score.

Safety Mike Evans went next. He grabbed the ball after it caromed off Adams’ hands and zipped 37 yards to the Green Bay 2. He would have cashed in had receiver Marquez Valdes-Scantling and guard Elgton Jenkins not combined to bring him down just short of the goal.

It mattered little. Ronald Jones II blasted over from there to put Tampa up 14-10, and the Buccaneers never looked back.

In between his two picks, Rodgers connected with running back Aaron Jones for seven yards. Only twice before – in New Orleans in 2008 and against the Lions in 2010 – had Rodgers tossed two interceptions in the span of three passes.

As Green Bay got underway in the second quarter, Fox Sports placed three quotes on screen. All were glowing in their praise of either Rodgers, head coach Matt LaFleur or both.

“Well, one is because you’ve got Aaron Rodgers as your quarterback. But the other part of that is Matt LaFleur and what he’s done within this scheme and utilitizing this personnel. It really has been brilliant. There’s not a lot of offensive minds that could have done what he’s done up to this point.”

As Aikman finished, Rodgers had bolted from the pocket with outside linebacker Jason Pierre-Paul bearing down on him. Running out of room, Rodgers threw the ball away.

The pick-6 came next.

Rodgers attempted 13 passes in the second quarter. Three were complete, two were caught out of bounds, two were throwaways and two were intercepted.

Rodgers twice missed Valdes-Scantling inside the Tampa 15, and he overthrew a wide-open Marcedes Lewis. The quarterback also failed to connect on a short toss to Adams.

For his efforts, Rodgers earned a passer rating of zero (3-of-13 for 21 yards and two picks) in the quarter.

But let’s be clear. Rodgers alone was not responsible for this collapse. He had plenty of help from his teammates.

Surrendering more than 21 points in a second quarter after holding an opponent scoreless in the first rarely happens in Packerland. Sunday was just the sixth time since 1921.

The last time the outlay reached 28, the Bears mauled Green Bay 61-7 in 1980. That remains one of the low points in team history. 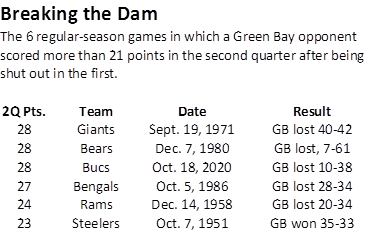