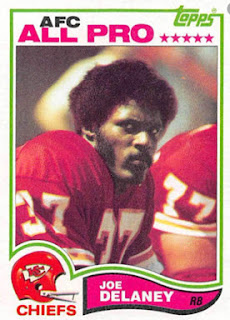 This past Sunday was chock full of interesting and competitive games; which of course is the life's blood of the NFL.

Thirty-nine years ago on October 11th, 1981 the Chiefs played the Raiders as they did this past Sunday. The Al Davis era began in 1963 and soon the Chiefs vs. the Raiders was probably the all-time best rivalry in the AFL.

The bitterness and hard-fought games continued and as we enter the October contest the Chiefs are 3-2 and at home to take on the defending Super Bowl Champions. Marv Levy has built the Kansas City offense around a rookie running back in Joe Delaney, and though he has played well so far----today was one of those days that a running back dreams of.

Delaney gained over 100 rushing, and over 100 receiving in the Chiefs victory. Kansas City recorded 20 first downs, and Delaney carried the ball 28 times, and just kept moving the chains. Joe did not break loose for any long runs(12 yards was his long for the day), but he just kept pounding away. Delaney gained 104 receiving, and his 61-yard reception was key. The Chiefs would continue to played strong football, as they were in the running for a playoff berth with a record of 8-4 till a late-season swoon. Delaney gained 1,121 yards for Kansas City and the Chiefs were optimistic entering '82. Though Joe had his moments in '82 the Chiefs lost four in a row in a 3-6 season.

During the summer of '83 no doubt Joe Delaney looked forward to an improved performance for himself and his teammates. The call for help at Critter's Creek has been well documented, and this man of courage attempted to save the lives of three boys who looked like they were going to drown. We will never know what kind of career Delaney would have had, and his death was tragic.

In October of '84 Sir Walter surpasses Jim Brown for most yards gained rushing in a career, and in the press conference, he referenced Delaney. Will close this short saga with a prayer for all of you; please stay safe, and healthy if at all possible with this pandemic. Next week will have two dandy journeys back in time for two of the all-time rivalries in the history of the NFL.