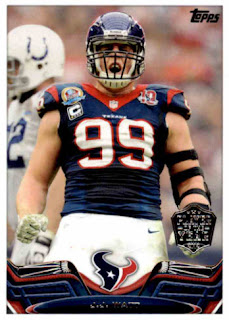 From 2011 through 2015 JJ Watt was unstoppable and seemingly indestructible. His production as a 3-4 end and a sometimes tackle in nickel and sometimes end in nickel he put up unprecedented numbers in sacks and tackles for loss (stuffs).

Even when average on a per 16 game basis (taking out the games misses) his averages per season in the last five seasons are 53 tackles, 10 sacks, 2.6 stuffs, 2.4 passes defensed, 2 forced fumbles, .8 fumbles recovered. Those numbers, actually, are good. Coaches would love to have a defensive lineman who averaged over 50 tackles and 10 sacks and two forced fumbles a season. But the issue is the 32 games he missed over those seasons.

Here are his career seasons—

So far? No. The team struggled and had a change in head coaches and in all likelyhood will have another new coach in 2021.

A quick Internet search will show there are rumors of trades involving Watt. If there is truth to them is anyone's guess. 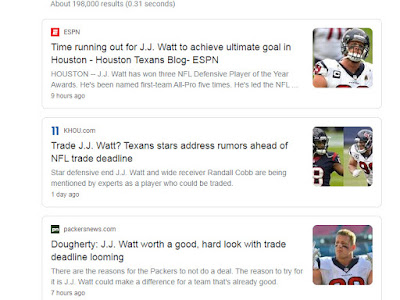 Some of these links and others not shown are proposed by writers and blogs, so they may be more fantasy than reality but they do make some sense.
Watt wants a ring. The Texans are building. Watt would bring some kind of return, though not a high pick anymore he could bring a couple of mid-round picks. It is without doubt Watt is productive enough to help numerous teams. Even a 75% Watt is better than most defensive linemen in the NFL and then you add the "recharge" factor, that intangible that often accompanies a player when he's traded (anecdotal, yes, but we have seen it happen over decades of following the NFL) and he would be a big help to any contender that picked him up in our view.
So, we'd love to see a trade. it would be great to see Watt go deep into the playoffs this year showing that he still can get it done. He's relatively healthy and not that old (31) that he could not only help a team, but he could also have several more years of solid production, even if it's not Defensive Player of the Year-type production.
We'll see. We can at least hope.
Posted by John Turney at 12:35 PM