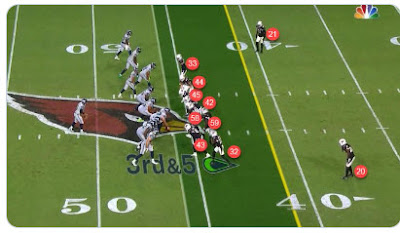 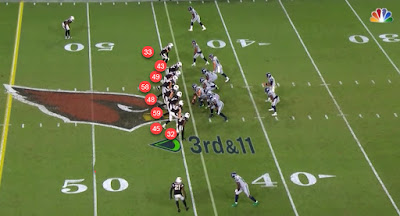 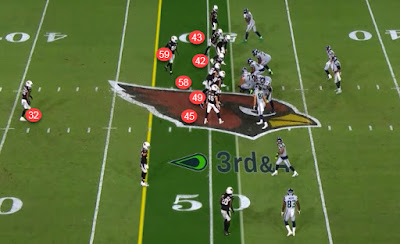 The Cardinals won a nearly five-quarter game against Seattle tonight and though there were many twists and turns and many things we could feature, we thought we'd point out the six linebacker-five defensive back defense they used on third downs (and have much of the season) that gave the Cardinals two key plays in overtime that put them in a position to win. What was a gimmick is now, seemingly becoming a "thing".  They have more than one package with sic 'backers and five backs, but the ones that got the sack and the pick, which we will detail, look to be the same or extremely similar. 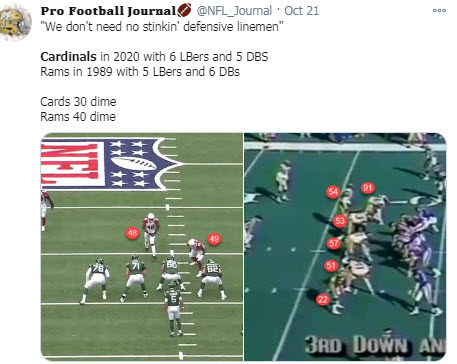 Tonight the Cardinals used this scheme a few times in overtime. One led to a sack of Rusell Wilson forcing the Seahawks to punt and that led to a Card drive and a missed field goal.

Here is the overtime playlist, starting with the sack that forced Seattle to punt: 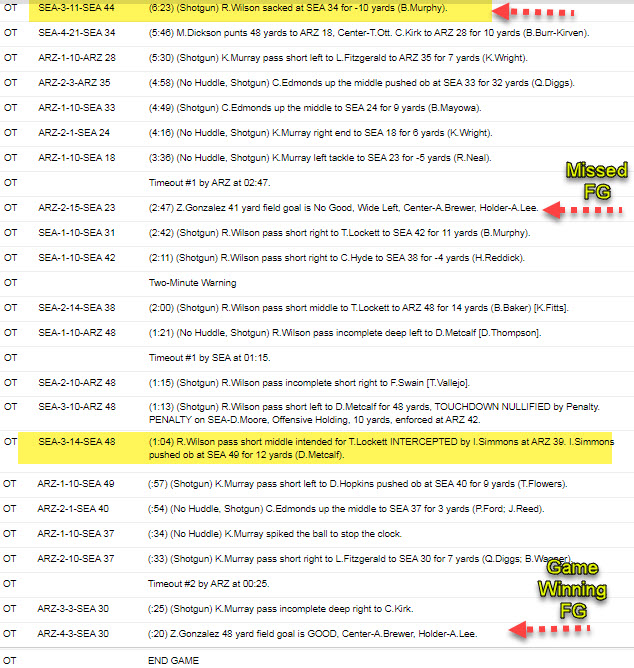 Here is the sack, six linebackers, five defensive backs, lined eight across the line of scrimmage. The rush the outside two on each side and Murphy, the slot defender, gets to Wilson.

They ran it again on 3rd and 11 and it led to an Isiah Simmons interception that led to a drive and a game-winning field goal.

The Cardinals lined up six 'backers and two defensive backs accross the line of scrimmage and rushed four and dropped four and Wilson trip to drop it over Isiah Simmons' head but didn't, we supposed, "moon" it enough. Simmons nabbed it and the Cards had yet another chance (they had many in the game) and this time they got it done.

So, same scheme, same alignment as far as we can tell from TV angles even the same four rushers and the same four players dropping into coverage, two results, both good,. A sack and a pick.
We've seen lots of schemes, alignments, some sound other on the gimmick side, but it's rare, in our view, to see something like this make a huge difference in a key game in front of a national audience. That is what we'd say is a separate, something that makes it a "thing" something to plan for something that gets national notice. This 0-6-5 is now on its way in our view.
Game ball: Vance Joseph the defensive coordinator of the Arizona Cardinals.
Posted by John Turney at 9:50 PM