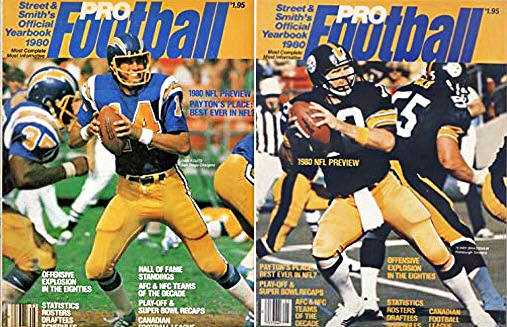 There have been quite a few 1970s All-Decade Teams chosen over the years and as far as we know Street & Smith's is the only one that broke it down by conference, an AFC and NFC Team.
The teams appeared in the 1980 Street & Smith's Offical Pro Football Yearbook. Also, we think it is the first year S & S used regional covers for their pro football magazine, having done that for its college issue for years.
The teams were selected by Larry Felser (AFC) and Don Pierson (NFC) both veteran NFL writers and both eventually were Hall of Fame voters. 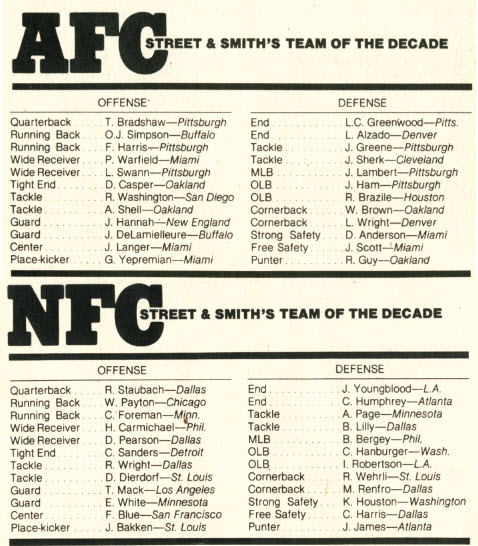 The esoteric choice on the AFC team was Russ Washington, the AFC-NFC format allowed the top NFC tackles to fight it out for two slots while the AFC didn't have the likes of Dan Dierdorf, Ron Yary, and Rayfield Wright, and even George Kunz (who spend most of his time in the NFC).

The same things that could be said for Washington apply to Jerry Sherk. Though we'd have gone with Curley Culp, there is nothing wrong with recognizing Sherk who was a very good player, a 1976 UPI AFC Defensive Player of the Year in 1976 even.

In the NFC the odd choice, and unlike Russ Washington, Forrest Blue isn't a good choice. Maybe for a 1970-75 half-decade team, but for the 1970s? We don't think so.

Regardless, it's an interesting team, worthy of looking at.