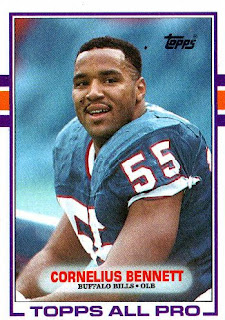 In the Bills one-gap 3-4 scheme Cornelius Bennett was, for all intents and purposes, the left defensive end in that defense. Most of the time was on the left side—though in a two-point stance—he was committed to a gap and that is one of the hallmarks of a one-gap 3-4. The so-called defensive end on his side was more akin to a tackle than end. But this is the nature of a hybrid defense what to call players (by technique? by traditional position name?), especially those who played all three downs.
In a two-gap 3-4 defense, all three defensive linemen have responsibility for two games, one if the play comes to their side, a different one if the play is away. In that scheme, the linebackers flow to the ball, in the one-gap 3-4 they have a responsibility to maintain gap integrity.

Regardless, when the Bills went nickel or dime was the usually left end, with his hand on the ground and rushed the passer, most of the time, anyway.

However, it was not a single look defense and they could switch things around and have the opposite Darryl Talley rush and Bennett could cover, which he did very well. A film study would have to be done to see what the  were, but if reviewing a few games we'd guess that Bennett was rushing more than 50% to 60% of the time in passing situations and Talley maybe 30-40%, with other backers making up any differences.

His role changed in the early-to-mid-1990s, playing inside linebacker and then left linebacker in 4-3 defenses with his new teams, the Falcons and the Bills. He was simply a good football player with physical qualities that allowed him the ability to play multiple roles.

Additionally, Bennett was the AFC Defensive Player of the Year in 1988 and 1991.

Here are his career stats, again with the tackle numbers coming from NFL Gamebooks— 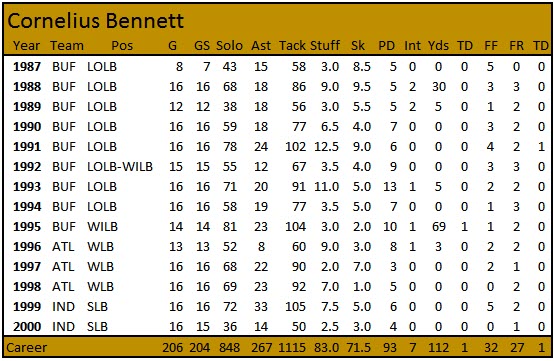 He had 83 stuffs to go with 71.5 sacks and had 32 forced fumbles and recovered 27 fumbles. He scored two defensive touchdowns (one INT and one FR) and started 204 of the 206 games he played and was very durable, missing only six games due to injury.

Bennett was a complete linebacker who excelled at more than one role—he could rush and get to the quarterback when asked and could cover as well and in base defenses, he could hold up his side and play the run well. He moved along the line, rushing from the outside, or dogging from an inside or stacked position.
It's too bad he does not often get mentioned with the complete linebacker-types or the rushbacker types, but that is what versatility will do sometimes—confuse even the experts as to what you were and leave you out of some discussions and we think that is why he's never gotten much support for the Hall of Fame (He's yet to be a finalist).
Hopefully, that will change in the near future, he was a helluva player.
Posted by John Turney at 8:40 PM