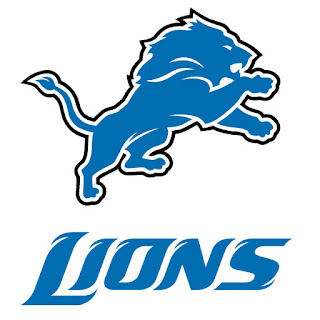 At Pro Football Journal we are trying to pick the best individual seasons in the history of each franchise, which we will continue today with the Lions. By "Career-year" we mean the best performances at each position, with the following rule: Only one season per player per position. For example, here, we cannot pick Barry Sanders’s best two seasons and use all RB slots. 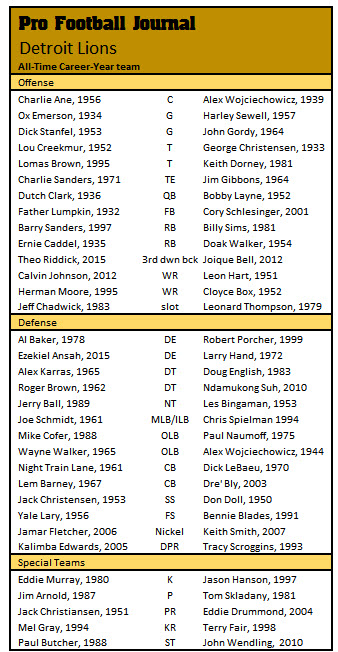 With the single-wing the tailback was usually the passer, the the leader, what really became the quarterback in the T-formation. Dutch Clark, 1936, is the First-team passer and his backup is Bobby Layne, 1952. 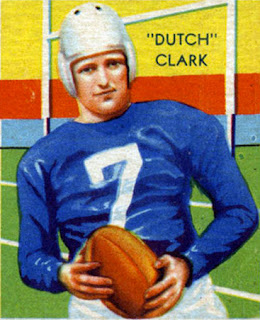 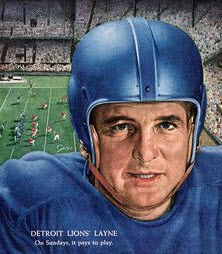 The Lions honorable mentions are Matthew Stafford, 2011, Scott Mitchell, 1995, Earl Morrall, 1963, and also Greg Landry, 1972. Stafford ad Mitchell set all sorts of records in their seasons, but didn't have the team success of Clark and Layne. Landry was a Pro Bowler in 1971, but we chose 1972 instead. He accounted for 27 touchdowns and was 8-5-1 as a starter, slightly better than 1971. We are not sure it's really a true honorable mention, but since we usually consider all Pro Bowl , we looked at it and called an audible. 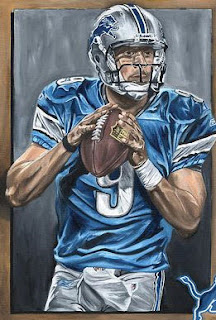 Calvin Johnson, 2012, and Herman Moore, 1995, grab the top two spots followed by Leon Hart, 1951, and Cloyce Box, 1952. Johnson and Moore, in pass-happy eras, piled up numbers that were impressive, even in an era where numbers are often bloated. Hart and Box got the next spots due to the touchdown receptions they accumulated. 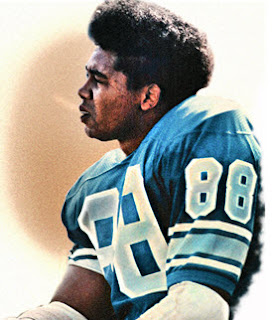 The fullback is Father Lumpkin, 1932, backed  by  Cory Schlesinger, 2001, and honorable mention Jerome Felton, 2009. Lumpkin was called a "blocking back" in the old formations but we convert that to the modern "fullback" and Lumpkin comes with the praise of Paul Zimmerman who gave him a mention in his 1930s All-Decade team. 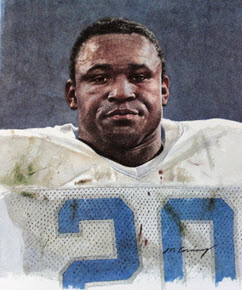 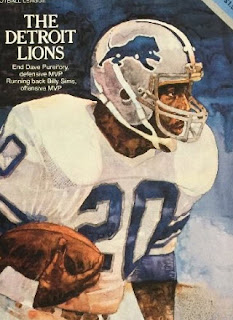 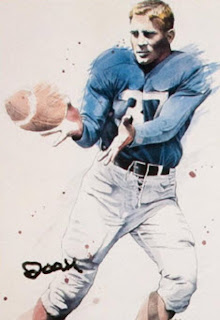 Sanders has many seasons that qualify, but we went with his 2,000 yard MVP season of 1997. Cadell was a major cog in the good 1930s Lions teams. 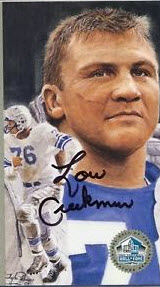 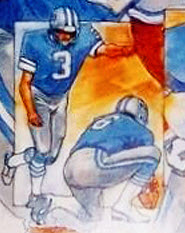 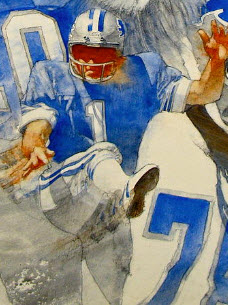 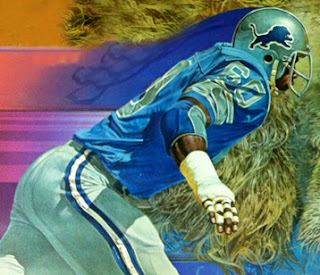 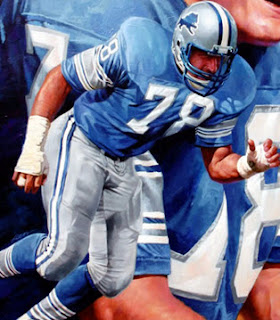 Baker was a rookie , he had 71 tackles, 2 PD, 2 FF and 23 sacks, the most PFJ's research has found in a single-season, though not the top number on a per-game basis since the NFL schedule was expanded to 16 games that season. had 47 tackles, 14.5 sacks and lots of QB hits. 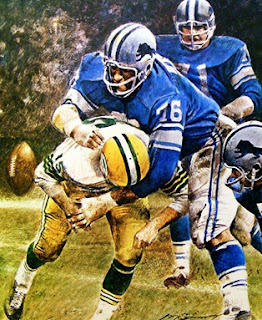 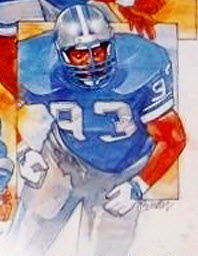 Jerry Ball, 1989, is the top nose tackle, with middle guard Les Bingaman, 1953, and the backup4-3 shade Henry Thomas, 1995, is an honorable mention along with Doug English's 1985 season when he moved to nose tackle and had .

Ball had 73 tackles, 9 sacks and 14 stuffs in 1989, all high numbers for a 3-4 nose . Bingaman was likely the largest player of his time, and not always considered a "hustle type" but in 1953 he was All-Pro and noted as a good player in the literature of the time. 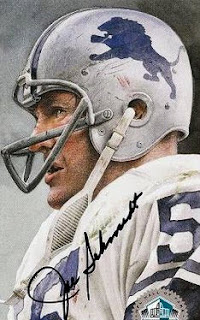 
Mike Cofer, 1988 (Pro Bowl, 75 tackles, 12 sacks and 3 forced fumbles), and Wayne Walker, 1965 (All-Pro, 2 picks, 4½ sacks), are the outside backers. Cofer played in an era where it was difficult to be voted All-Pro as his position since there was such competition. Players of that era included  Taylor, Andre Tippett, Rickey Jackson, Kevin Greene, Pat Swilling and others. 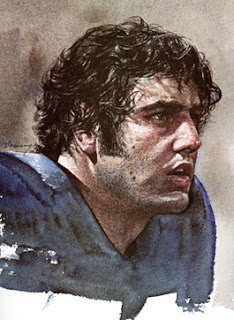 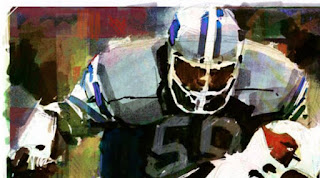 Paul Naumoff, 1975 and Alex Wojciechowicz, 1944 are the backups. was Second-team All-Pro in 1970 and Second-team All-NFC in 1975. We chose the latter in that he was known as a tough run in 1975 he had a career-high in interceptions (2) and sacks (6½).  was a two-way player and in addition to being a center, he was also a linebacker and in 1944 he intercepted 7 passes and was All-Pro according to Pro Football Illustrated.

Jimmy Williams,  1989, Charlie Weaver, 1976, and DeAndre Levy, 2013, are the honorable mentions. Williams was a solid player for a long time, and never got a lot of recognition. In an era where the  dominated, Williams was a good coverage linebacker, could blitz and was a good run defender. In 1985 he had 7 sacks, but we chose 1989 when he still had 4 picked off 5 passes, deflected 9 passes and had 95 tackles. Weaver, in 1976 had 7 sacks and intercepted 2 passes and recovered 2 fumbles and was solid in all phases of the game. Levy's season consisted of 117 tackles and 6 interceptions, a very high number for an outside linebacker. He was also credited with 15 passes defensed and one of his interceptions was returned for a touchdown and seven of his 117 tackles were run/pass stuffs. 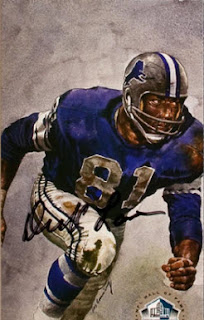 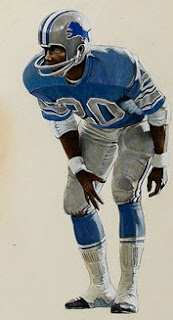 Bob Smith, 1952, Jim David, 1954, Bryant Westbrook, 2000, and Chris Houston, 2011 all merit honorable mentions. was a fine left corner, who would come up and force run plays. He blew out his tendon in a Thanksgiving game and it really, ended his career. likely would have been a Pro Bowler that season. 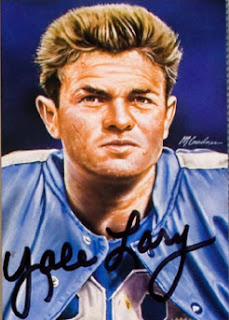 The nickel rusher spot is manned by Kalimba Edwards, 2005. The Second-team pick is  Tracy Scroggins, 1993, with Antonio London 1999 the lone honorable mention

Agree? Disagree? Let us know where we erred in the comments sections below.
Posted by John Turney at 2:21 PM