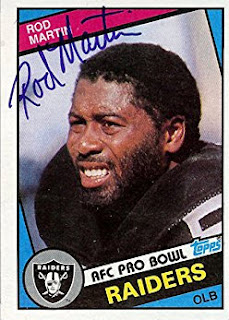 Whenever John Madden announced a television game that involved the Raiders he always seemed to relate the story of how he drafted Rod Martin in the 12th round in 1977. He called his friend, John Robinson then the head coach of the USC Trojans, and asked if there were any good players that may have been overlooked. Robinson said Rod Martin is better than anyone taken in the last few rounds. Madden took his advice and Martin became a Raider. And he became a great one, too.

Martin was a right-side outside linebacker for the Raiders and his skills included playing the run, good coverage, and the ability to blitz well, similar to others we've recently featured here on Pro Football Journal.

He really should have been the Super Bowl MVP in 1980 when he intercepted three Ron Jaworski passes, but that's a post for another day.

In 1981 he was a Second-team All-Pro by NEA (considered the "player's" All-Pro team) and in 1982 he was a First-team All-Pro by the NEA. In 1983 he was voted the UPI AFC Defensive Player of the Year and was named to several All-Pro teams including the NEA and Sporting News.

In 1984 he was a consensus All-Pro and in 1985 he was a Second-team All-AFC selection and an alternate to the Pro Bowl.

He scored six defensive touchdowns and two safeties and had 56.5 sacks.

Here are his defensive stats, coming from the NFL Gamebooks.