Part VI: Who Will Be On NFL's 100th Anniversary Team? 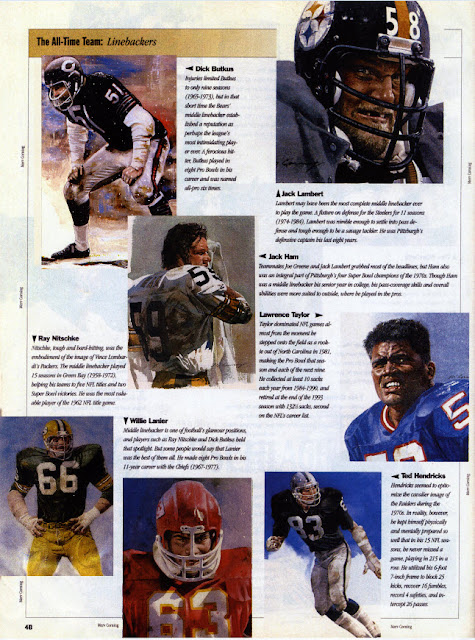 With the 1994 iteration of the anniversary team the select committee chose four middle linebackers and three outside linebackers. Assuming the same format we suspect there will be changes to this part of the roster.

Nitschke played 15 seasons but was a full-time starter in 10 of those. The competition was stiff for post-season honors in the NFL Western Conference and Nitschke only emerged with one Pro Bowl selection and three First-team All-Pro selections and one Second-team selection. Film study shows he was excellent and especially good in run support but it's a bit disconcerting to see Joe Schmidt forgotten so quickly. True, he didn't get five championship rings, but he was the most complete 4-3 linebacker (in our view) of the 4-3 era. He was solid in run game and one of the top 3-4 in pass coverage. He was also one of the top 2-3 in goal line defense and had a goodly number of sacks as a blitzer/dogger.

Schmidt was a 10-time First-team All-Pro (eight consensus) and was voted by his peers to 10 Pro Bowls. If any of the voters want to see a detailed film analysis, they can travel to T.J. Troup's home and he can put on the fil,—the eye in the sky does not lie.

Ray Lewis seems like a lock on the upcoming team and suspect he will supplant Lanier. Lewis was voted to 13 Pro Bowls and was a 7-time Consensus All-Pro. He was a two-time NFL Defensive Player of the Year and ended with 31 interceptions, 41.5 sacks and two Super Bowl rings. It's quite a resume.

Obviously, Lawrence Taylor will keep one outside linebacker slot and it would be fine by us if Ted Hendricks and Jack Ham did as well, but it may not happen.  Derrick Brooks needs to be considered and Von Miller, who will have completed 10 seasons by the time the vote is taken may need to be as well, if he keeps up his current pace. Bobby Bell might deserve another look. His speed was really special and shows up on film, but he also played just 11 seasons, but as a left linebacker we think he was just a bit better than "Kick 'em in the head Ted" Hendricks. Bell could blitz, cover, play the run and hit very hard.

It will come down to how sacks, as a statistic, are valued as part of a linebacker's resume. If rushbackers rule the day then Miller and others would have a better chance. If a more complete type of outside linebacker is preferred, then Hendricks and Ham will possibly keep their slots.

Again and again, we shall see.