Aaron Donald Double-teamed 70% of the Time on Pass Plays? 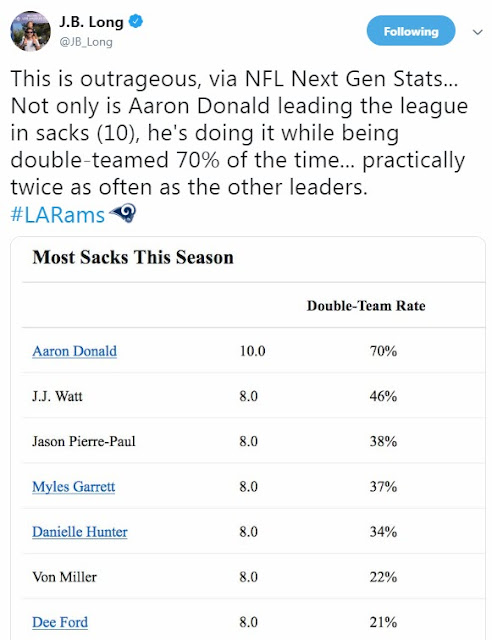 After a couple of clarification Tweets with Mr. Long it turns out it was 70% of the time on passing plays. It seemed high to me, having a little bit of experience with these kinds of esoteric stats over the years and also doing some film grading myself and mentioning similar things HERE about Pro Football Focus's research.

So, I pulled up the All-22 film from NFL Game Pass and watched all the defensive snaps of Donald on passing downs. In my view, I was very generous in grading what plays were double teams. If an offensive lineman or back was even assigned to Donald but never really engaged I gave that a "double team" grade.  If there was a tackle-end game or end-tackle game and two players, over the course of the snap engaged, I counted that.

All said I came up with a very high figure, an amazing figure in my view, of 52% of the passing snaps Donald was doubled. Fifty-two percent!. Having at least some knowledge in this topic it is as high as it can get for a season. You can find games where a player is doubled more, but not many, if any seasons.

So, what about the Nex Gen Stats figure of 70%?

So, here is one person asking if the Next Gen folks were grading the All-22 or if they were using the chips and computer to do for this stat like they did for the Fastest NFL players or Fastest Sacks or Hurries something like "real-time location data, speed, and acceleration for every player, every play on every inch of the field".

I'd like to know if this was something done visually or on a computer screen. Not that anything would be wrong, but I'd like to know because I think I can see a double team and as mentioned, grading very generously my view is Donald is double-teamed on pass players around 52%.
Then again I could be way off base and totally wrong.
Posted by John Turney at 4:43 AM