By TJ Troup
Gonna be a short column today, yet am researching for some vital info for upcoming saga's; stay tuned.

My first research project ever was in the area of returning an interception for a touchdown (began 32 years ago). Last Thursday in Detroit Eddie Jackson of the Bears pilfered Matthew Stafford and dashed to the promised land to win the game.

This was not the first time a Bear has returned an interception for a touchdown against the Lions. Chicago has now scored 20 times on interceptions vs. Detroit (17 of the 20 in victory) to join a very small fraternity of teams with at least twenty against a specific opponent.

There are writers out there that really can tell a story, so this is a "plug" for David Fleming at ESPN as he told the story of the Dallas Texans against the Bears on Thanksgiving in 1952. If you have never seen the superb show "THE FABULOUS '50'S" by Steve Sabol and NFL Films you are missing out as George Connor weaves the tail for Steve with highlights being shown as he speaks. 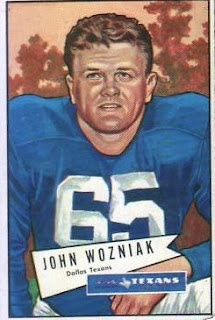 Fleming does a superb job, yet there are some details/facts he needs to correct or add. The Texans that year had two Pro Bowl players. The second was guard John Wozniak, and he had an interesting career. One of the details that Mr. Fleming could have included was that the Bear offense during that twisted season gave the ball to their opponents at an alarming rate including the loss to the woebegone Texans.
Posted by TJ Troup at 3:48 AM