LOOKING BACK
By Chris Willis, NFL Films
If you’re a Chicago Bears fans you might know the Merrell name. But do you know who Stuart Merrell is?

Stuart Merrell was the son of a Chicago cartoonist. His father, Lew Merrell, had attended Northwestern University and the Chicago Academy of Fine Arts. He got his start drawing cartoons for the Chicago Inter-Ocean and Chicago Herald-Examiner. He eventually started his own company called Merrell Features.
One of Lew Merrell’s most well-known clients that he started in the 1930’s was his contract with George Halas, owner of the Chicago Bears. Lew was editor of the Bears game day programs for over twenty years. Married with children, Lew would eventually bring aboard his son, Stuart Merrell, who everybody called “Stu.” The younger Merrell would follow in his father’s footsteps.
Stu attended Evanston (IL) High School where he was a 3-sport star, lettering in baseball, football and basketball. Following graduation he stayed close to home attending Northwestern University where he continued his baseball career. Merrell lettered in baseball and was co-captain in 1936. The following year he played professional baseball- the starting shortstop in the Three-Eye League with the Moline Plows.
While playing baseball Merrell started to join his father in the cartoon business, especially becoming interested in working with the Chicago Bears account that his father enjoyed being a part of. In 1939 Stu Merrell was hired as Editor (Advertising Director) for the Chicago Bears game programs.
That fall Stu began drawing the covers for several Bears home programs. His color artwork made the covers stand out to fans heading into Wrigley Field for home games. He did covers that featured Bill Osmanski (Oct. 29, 1939; Lions at Bears); Joe Maniaci (Nov. 5, 1939; Packers at Bears); and Bobby Swisher (Nov. 19, 1939; Eagles vs Bears). Stu would always sign his name at the bottom of each drawing, as each program was sold at Wrigley Field for fifteen cents. 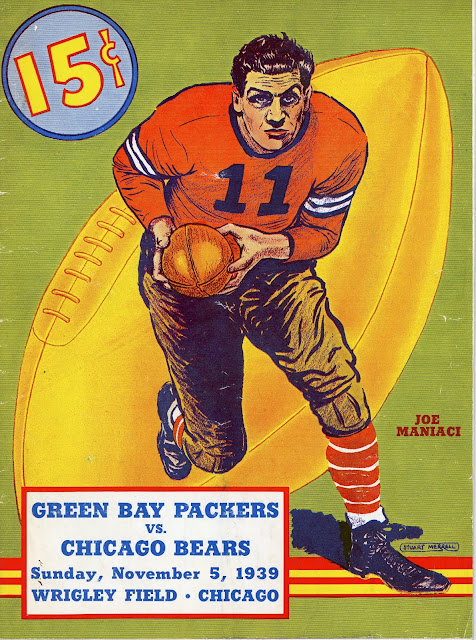 The bright colors, shadows, wavy hair, and dark lines made the football images pop off the cover page. Young “Stu’s” artwork became a hit during the 1939 season. Inside of the program were several other drawings, mostly black-and-white, of other Bears players including ones of Osmaski, Eggs Manske, Sid Luckman, Danny Fortmann, Joe Stydahar, and George Musso. 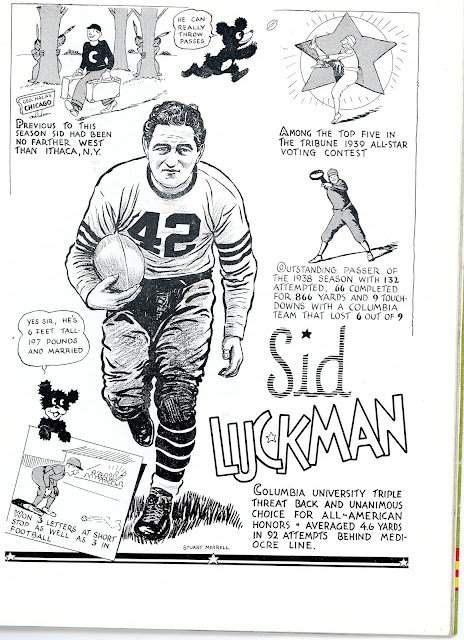 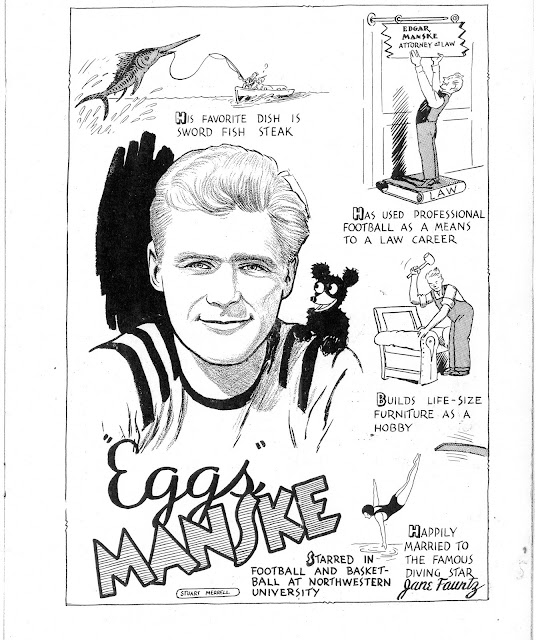 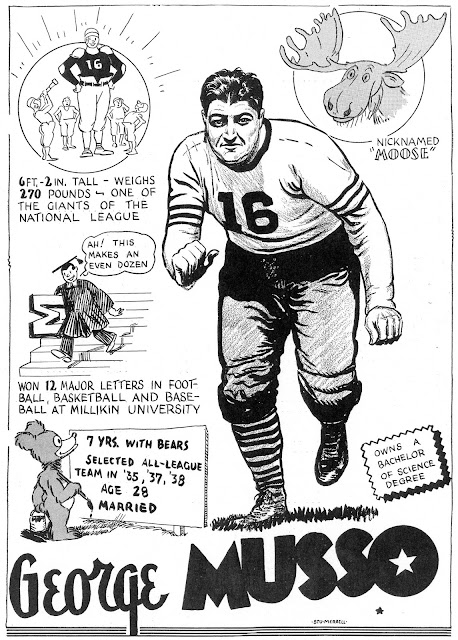 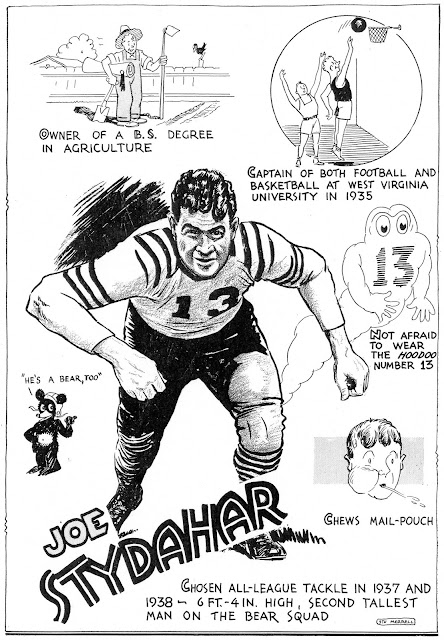 Just as the 1940 season started Stu Merrell suffered a tragic accident. While visiting his father at his office building at 318 Randolph Street in Chicago, young Merrell entered the dark lobby. As he opened the elevator door, believing the elevator was at the street level, he stepped through the door and plunged to the bottom. Unresponsive, Merrell was taken from the bottom of the elevator to nearby Henrotin Hospital. He was pronounced dead there. He was just 27 years old.
A month later the Bears wrote a short tribute in the Oct. 13th game program against the Detroit Lions. On the first page inside Stu Merrell was honored for his work with the Bears under the headline “A Farewell to a Friend.” 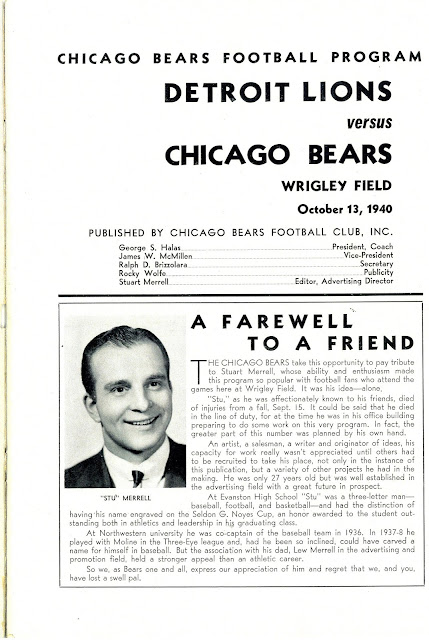 Although most football or Bears fans don’t know who Stu Merrell is, his work lives on with the covers of the 1939 Chicago Bears programs.
Posted by cdw83 at 11:52 AM