Aaron Jones: An Above Average Back 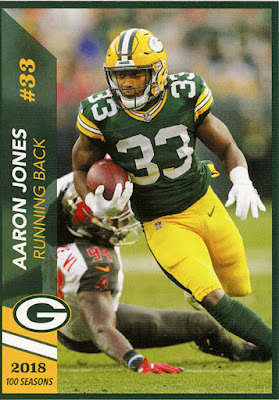 In the quest to stand out, Aaron Jones has squeezed more out of his opportunities than all but a very few.

Jones, the Packers second-year running back, ran around, through and away from the Dolphins Sunday at Lambeau Field. He logged a career-best effort that helped topple the visitors from by a 31-12 count.

Jones, the 19th running back selected in the 2017 draft, captured 145 yards rushing on just 15 carries. He chipped in an additional 27 yards on three pass receptions.

For those armchair quarterbacks who had been clamoring for more of Jones, this display must have been satisfying. No. 33 took part in 39 of ’s 55 offensive plays (70.9 percent) making him the closest thing the team has to a featured back.

Jones took to the field on seven of the team’s nine drives. He carried at least twice on five of those advances, all of which produced points.

and Jones got started early. The team moved 141 yards on 11 plays the first two times it had the ball. Jones accounted for 125 of that total on just seven touches.

Jones ripped off runs of 12 and 15 yards the first time out. He chipped in another 27 on two receptions before Aaron Rodgers capped that initial march with a 7-yard scoring pass to receiver Davante Adams.

The Packers’ second drive was all Jones. He zipped 67 yards through a gaping hole to the 4-yard line. He added another two yards, then plowed into the end zone buried amid a scrum of humanity as went up 14-3 at the start of the second quarter.

Jones helped out to a lesser extent after the Dolphins had closed to 14-12. He ran for 38 yards on six trips and had one catch for no gain as scored on three consecutive possessions to put the game on ice.

In evening their record at 4-4-1, the Packers collected a season-high 195 yards on the ground. Jones was responsible for eight of the team’s 10 rushing first downs.

Jones also authored six runs of 10 or more yards. That helped him generate an impressive average of 9.67 yards per rushing attempt.

Perhaps you’ve heard that Jones leads the league in this category. His showing against the Dolphins only solidified his position at the top.

How many other players in team history have approached this type of production? Not surprisingly, the field is quite limited.

Only Tobin Rote – a quarterback – had a higher average (6.99) after his first 73 rushing attempts in a season. Rote stretched the field as he led the team in rushing in 1951.

In assembling his plush average, Jones has taken off on more than a few long journeys. He is the man behind 18 of the team’s 34 runs of 10 or more yards.

Jones has also limited his backward motion. He has six of the team’s 18 runs for loss (kneel-downs excluded).

And those six runs of 10 or more yards that he racked up against the Dolphins? Six packs like that don’t come around often.

Prior to Jones, only eight players in team history had that many or more in a game. Ahman Green (with six) was the last on Nov. 2, 2003. 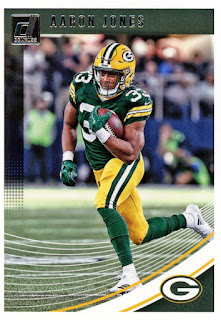 For as remarkable as his season has been, not all has clicked for Jones. No back can carry as often as he has and not experience some setbacks.

In , Jones was tackled for a safety, an event that touched off the Rams’ scoring. In , Jones fumbled on the first play of the fourth quarter to end a promising drive in Patriots’ territory.

In his defense, the fumble was the first of his professional career. The safety occurred on a play that had run written all over it.

So what’s next for Jones? In addition to a near-certain increase in his workload, he can set his sights on two other accomplishments that would further differentiate him from the field.

It will take some work – he’s on everyone’s radar now – but Jones could join those two. He leads Nick Chubb of (6.16) by more than half a yard.

Jones could also reach 1,000 career rushing yards with the fewest attempts of any Packer. He has 942 yards on 154 trips and could achieve that milestone in Thursday night.

Rote, the team’s leading rusher in the 1950s, got to 1,000 yards on just 163 tries. If Jones were to gain 58 or more on his next eight runs, he’d glide past Rote as if he were just another defender, adding this little-known record to a resume that will likely continue to grow.

Inflated Averages
The 12 Packers who rushed for more than 400 yards on their first 73 carries of a season. 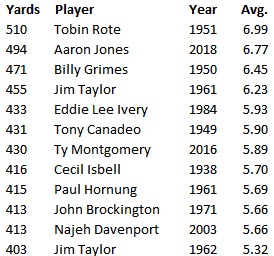