In 1992 I sent a list of players and their sack totals to some of the Hall of Fame voters like Gordon Forbes, Will McDonough, Paul Zimmerman, etc. McDonough called me and did an article in the Boston Globe. Zimmerman called me and left a nasty message saying "You stiffed all the AFL guys" and hung up. Then, there was another message on the machine "I see you got them, there, sorry. I guess a lot of them didn't have long careers".

So began our friendship. We spoke on the phone during the seasons may be a couple of times, then later I followed him around at Super Bowls to media events like a puppy, gleaning what info I could. That continued until his series of strokes ten years ago.

He was missed then, and even more now. That you for giving this "no one from nowhere" the time of day. You put me years ahead of the learning curve with your patented gruff kindness. 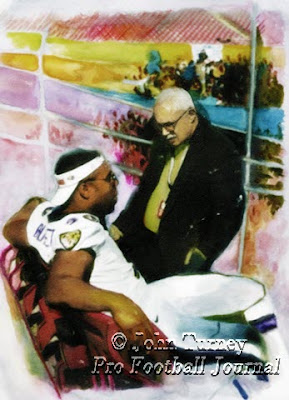