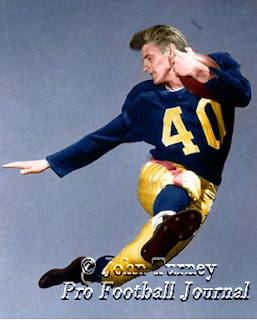 No doubt the game last night between the Chiefs and Rams will be discussed over and over again; for many, many reasons. The total offensive yardage was 1,001 yards, and while that is very impressive, the Rams have been here before, and amazingly on the same date of November 19th.

When the AAFC disbanded after 1949 and three teams moved into the NFL the schedule maker (probably Bert Bell) had to adjust who had the bye each week during the season. Since the New York Bulldogs were now christened the New York Yanks; the league had a very different look for the 1950 season.

The Yanks had offensive talent and were actually contenders though they had lost in the Coliseum earlier in the year. The Rams opened the year with a home loss to a nasty bunch of grizzlies from Chicago, but Hampton Pool and Joe Stydahar had taken the Clark Shaughnessy offense to a new level.

We are at Yankee Stadium on this November afternoon, and a record will be set that still stands. The two teams combined for 1,133 yards in a thrilling 43-35 Los Angeles victory. There is a flawed box score at Pro Football Reference (PFR) if you want to look at the individual offensive stats. This site has chosen to not list the interceptions, and kick returns though they are available from a respected researcher.

So, let's start with the interceptions since like the game last night they are significant to the outcome. The Ram corners of Tom Keane (left) & Woodley Lewis (right) both intercept three times in the game. PFR lists Bruce Alford of the Yanks with a fumble recovery for a touchdown; again similar to last night, but this is an error (the correction was given to the site years ago, but has never been updated). Alford recovered a blocked punt in the end zone for a New York touchdown.
Tyreek Hill is one helluva player for Kansas City. Watching him in the open field with his quick shifty moves is a joy. The Yanks had two such backs in 1950 in Buddy Young and George Taliaferro. Usually, George Ratterman was under center as the quarterback in the revised T-formation, but at one point in the game, the Yanks are in a version of the "wildcat" or single wing with a direct snap to Young who quickly speeds left on a sweep and then hands off to Taliaferro on a reverse. The right-handed Taliaferro motors to the right and then drifts back and lofts a long arching spiral to end Art Weiner for a 50-yard touchdown. Yes, folks, there was some razzle and dazzle in the forgotten days of yore.
Watching the highlight film shows a Ram offense that is almost unstoppable; kinda like last night. The trade of sure-handed right end Bob Shaw to the Cardinals for tackle Bob Reinhard allowed Elroy Hirsch to once again become a starter (he lost his left halfback role during the latter part of '49). Hirsch is learning the end position and on this afternoon he shines throughout.
On one of the Hirsch touchdowns, Harry Wismer doing the narration exclaims " Hirsch roars into the clover". Los Angeles prevails 43-35 to stay in contention with an 8-2 record (have now won six straight).

The Rams lose to that nasty bunch of grizzlies the next week, yet the two teams tie with 9-3 records for first place.

The Rams of 2019 travel to Chicago in three weeks. Is it possible that these teams will also meet in the playoffs this year? Oh yeah, the Rams in 1950 won the playoff bout in the Coliseum against the Bears to advance to the title clash. Possibly November 19th will always be remembered as Ram day on offense?

This coming Thursday the 22nd is family, friends, and football on Turkey day. So will take all of you back to the game of that day in 1962. After the pheasant hunt with my dad and uncles on that frosty Illinois early morning; got settled in to watch the Green Bay juggernaut travel to Tiger Stadium to see if they could remain undefeated.
Much has been written about the Lion pass rush that day directed by young defensive coordinator Don Shula and orchestrated by middle linebacker Joe Schmidt. That Lion team was known for their defense (rightly so), yet the MVP of the Lions in 1962 was All-Pro split end Gail Cogdill. The lean, swift receiver twice in the first half scored on touchdown passes to give Detroit an insurmountable lead. 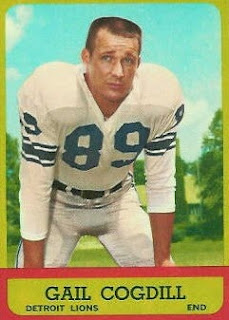 Many players have caught multiple touchdown passes in the first half of a game, but how many did this against a Lombardi/Bengston defense from 1959 through 1967? Four men, that's right ONLY four men accomplished this in the nine years of the Packer dynasty.
Oh? You would like the names? Ok, they are Raymond Berry (1959 & 60), Gary Collins of the Browns in 1966, and Dave Williams of the Cardinals in 1967.
Posted by TJ Troup at 3:41 AM