All-Decade Team "Repeaters": Did All of Them Fit? 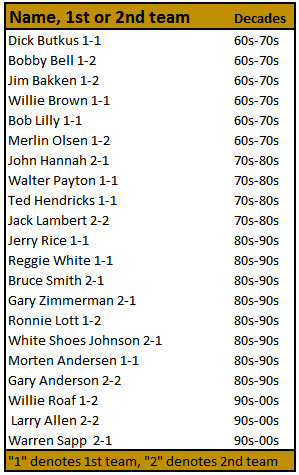 All-Decade repeaters, or who were named to the Official HOF All-Decade Team more than once, rightly deserve a higher place in history than those who only made one team, so it is said. It connotes that a player was so dominant for a long period of time he had to be voted both. Right?

Well, in my view, yes and no. Sure, in theory, but always worked? Not really.

One case-in-point, in January, 1980, Earl Campbell was voted Second-team the 1970s All- team despite playing in only 1978 and 1979. That seems to be short a tenure for Campbell to be considered in our view.

It also begs the question, How many seasons should a player have to warrant "All-Decade" consideration in a given decade? Five? Six? Well, it can never be exact, and maybe one answer for all players may not be the solution.

In the Brown played six seasons and Gale Sayers five and those players seem to fit ideally even though they played 60% or less of the decade. Brown retired while he still had lots of gas in the tank, but for that decade no one was really close to his accomplishments. Sayers close, he was All-NFL five times in five years, and did it battling knee injuries.

However, since there are no official "mid-decade All-Deacde Teams" the voters are in a binary, either-or situation. Either he's in the not. Either he's on the 1970s and so on. Sometimes either-or or black and white thinking can miss needed nuance.

So, we will try and list all the All-Decade repeaters and opine where they should fit and why mid-decade teams might fill in some gaps. Each of the players who have ever been named First- or Second-team All-Decade on one of the Official HOF NFL All-Decade teams is listed and commented upon:
Dick Butkus was 1st team in both the 1960s and 1970s. If you are a voter in that room in the Summer of '69 Butkus, though he played just 4 years is the choice, his peak was so high that the lack of seasons in the decade is not relevant, really.

Also, it seems that middle linebacker was not on the ballot, just three spots for "linebacker" and as a result five linebackers were named and three of them were middle linebackers, including Tommy Nobis who had just completed his fourth seasons. Joe Schmidt, who was dominant in the early 1960s and still very good when he retired after the 1965 season (his sixth of the 1960s) was not mentioned. He was on the 1950s team, though.

Now, if one were in a meeting in January, 1980, picking  1970s , Butkus might not come to mind as he played only four seasons and the last couple he was really not himself due to really bad knee injuries. He got nine of the 25 votes. Jack Lambert got six votes. So, there are ten votes to other players. It is safe to assume Bill Bergy got some, maybe Lee Roy Jordan, or Willie Lanier. The honorable mentions have never been released. Bobby Bell was an All-AFL All-Decade choice and a Second-team pick for the 1970s, garnering four votes. Like Butkus, the 1970s was not "his" decade. And, like Butkus a 1965-75 decade would fit ideally. Players like Isiah Robertson or Phil Villapiano or even a Chris Hanburger would have been better fits for the 1970s Second-team than Bell. The First-team 1970s would clearly be Jack Ham and Ted Hendricks.

Jim Bakken was All-Decade in the 1960s and Second-team the 1970s. Frankly, we didn't look that closely at kickers for the is for Second-team in the 1970s.
Willie Brown was All-AFL All-Decade, rightly so, and First-team 1970s. H was certainly more dominant the first half of that the last half, but he aged gracefully and seems like a very reasonable choice for both decades (and would be in high consideration for the 1965-75 team as well).

But, in our view he'd be maybe 4th in the 1970s behind Roger Wherli, Mel Blount and Lemar Parrish. But, he'd be slightly ahead of Jimmy Johnson, Emmitt Thomas, Mel Renfro and Lem Barney, all Hall of Famers who had excellent seasons in both the 1970s and the previous decade.
Bob Lilly was on the 1960s team and First-team 1970s. This would be the same analysis as Butkus and Bell. Lilly played five years of the 1970s, and his last two seasons, 1973 and 1974 he was lifted on passing downs. Not sure that he should he on the 1970s team. Alan Page and Joe Greene would be fits for the 1970s First-team (Greene was First-team, Page Second-team).
Merlin Olsen was on the 1960s team and Second-team the 1970s. He played seven years in the 1970s and was a Pro Bowler for six of them, but he was more dominant in the 1965-75 decade and even the 1960s than the 1970s, though he was still good. Were we to pick Second-team defensive tackles for the would likely include Curly Culp at one of the spots and one of couple of top players who battled injuries: Wally Chambers and Jerry Sherk. We'd then shift Lilly and Olsen to a mythical 1965-75 team.
John Hannah was Second-team the 1970s and First- in the 1980s. Again, a perfect fit for 1975-75, but at his was the best guard for the 1980s, but there might me a couple of guards in the 1980s that played nine or ten years that could come close.
Walter Payton was First-team the 1970s and the 1980s team. Though this will be controversial, I thought the 1970s First-team running backs should have been O.J. Simpson and Franco Harris and the Second-team backs Chuck Foreman and then Payton. Earl Campbell would easily be the pro 1975-85 team. And he's also clear choice for the 1980s team. Pretty impressive.
Ted Hendricks was First-team on both the 1970s and 1980s iterations. The 1970s team, 100% yes. The 1980s? No. 1975-85? Probably. I just cannot see him taking the place of a Clay Matthews, to name one excellent 1980s outside linebacker who was passed over.
Jack Lambert was Second-team in 1970s and Second-team in the 1980s. In the played 5 years, though 1984 he barely played. He'd be one of the two ILBers on a 1975-85 , but doesn't fit 1980s team profile and really, should have been voted it.
Jerry Rice, again, this will draw criticism, but he was First-team for both the 1980s and 1990s. In t certainly his four dominant years better than someone else's close-to-dominant 8-9-10 years? Tough call. Rice is the  for 1990s and also 1985-95 (were there one), but 1980s? No sale.
Reggie White was First-team 1980s and First-team 1990s. Same exact analysis as Jerry Rice.
Bruce Smith. Second-team 1980s, First-team 1990s. Same exact analysis as Reggie White.
Gary Zimmerman Second-team 1980s, First-team 1990s. Same exact analysis as Bruce Smith. Unless USFL honors count, he's not a fit for the 1980s team, starting in 1986. would be perfect for the 1985-95 team.

Ronnie Lott He was the only choice as a 1980s team member but not as a 1990s team member (even as a second teamer. He only played half a decade and even though he was effective from 1990-92 he wasn't the star he'd been in the 1980s.
Billy "White Shoes" Johnson, Second-team in 1970s (lost out to Rick Upchurch) and First-team 1980s. Like with Jim Bakken have not looked at this closely enough to comment.
Morten Andersen was First-team in 1980s and in the 1990s. Seems reasonable, but have not looked at kickers. However, we always thought Nick Lowery was a top 1980s kicker and he didn't get enough mention. We think he'd be the best pick for First-team 1980s kicker. 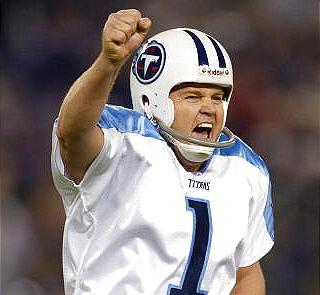