You Tell 'Em I'm Comin', And Hell's Comin' With Me

When Wyatt Earp finishes off Stillwell with his shotgun at the Tucson railroad station he emphatically states the above title . .  fire in his eyes.

Tomorrow the 19th of March would be Wyatt's birthday. No doubt if Wyatt was alive to watch the Houston Oilers in 1961 he would have cheered for Charlie Hennigan. Like Earp moving to Tombstone to make his fortune, Hennigan moved to the "frontier" of pro football of the time, the American Football .

When Hennigan's college career ended, he began his teaching career, but missed playing football. Having his teachers pay stub in his helmet was motivation to endure during his struggles with learning the proper way to run routes, and improve his consistency in catching the ball at training camp.

The 1960 Houston Oilers captured the first AFL Championship and Hennigan contributed, yet he was not at the top of his game due to nagging injuries late in the year. Charlie's efforts to improve in every facet of being a top notch receiver came to fruition during the magical season of 1961 for the Oilers. The year began with a win, and then the tailspin which cost Lou Rymkus his job. Wally Lemm leaves his business and returns to coaching. Though Lemm has only two assistants, he has a team that he knows has the talent and dedication to win, and Wally taps into that as Hennigan performs at a level very rarely seen in pro football history.

Houston did not lose a game the rest of the year with Lemm as coach, and repeats as AFL champion in the hard fought title game victory in San Diego over the Chargers. San Diego won their first 11 games of the year until Hennigan and his teammates claim victory. Charlie gains over 200 yards receiving in defeating San Diego with this stat line: 10 receptions, 214 yards for a 21.4 yard average and three touchdowns.

Hennigan continues to play outstanding football the next two 59 receptions, 959 yards and 9 touchdowns, while making either First- or Second-team All-AFL.

When Don Hutson retired at the close of the 1945 season he was considered the best receiver of his time. Years later his stock rose to legendary status, as receivers came and went; yet Don still held all the records. One of his most impressive records was the fact that he had 24 games in his career where he gained over 100 yards receiving.

Men such as Fears, Hirsch, Howton, and Hill could not top this mark. Raymond Berry by the close much of the '63 season had 22 games where he gained over 100 yards receiving to put him within striking distance of the record, but 1964 would again prove to be a season of the ages for Hennigan as he caught over 100 passes.

November 15th, 1964, the Raiders defeated Houston 20-10, but Charlie again caught passes for over 100 yards, and established a new record as he passed Hutson with his 25th 100 yard receiving game!

Hennigan finished the season with 101 catches, which is still the NFL record for a 14-game season and it was not broken until 1984 when Art Monk had 106 receptions in a 16-game season. Not bad in terms of legacy.

Hennigan accomplished this in just his 63rd game. So let's celebrate Charlie Hennigan's birthday and watch Wyatt Earp on his vendetta ride. 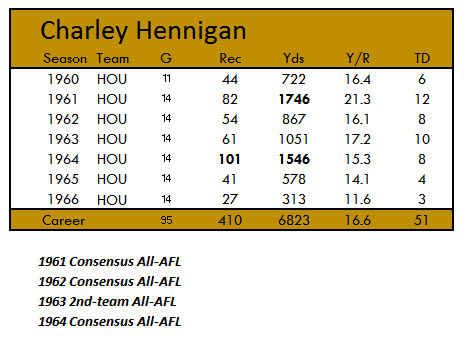