Super Bowl Record for Sacks in One Game? Still L.C. Greenwood—Kind Of

PERSPECTIVE
By John Turney
Von Miller, MVP of Super Bowl 50, had 2.5 sacks and was a dominant force in that game. Carolina Panther pass rusher Kony Ealy topped that with 3 sacks, a mark that tied the post-1982 record help by and Darnell Dockett.

However, we offer that L.C. Greenwood still holds the record with the four takedowns of Roger Staubach in Super Bowl X. 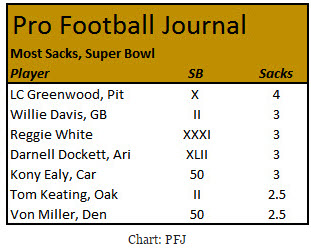 Here are the texts  the four plays in question:

Added to which  here is the video for all four sacks:

Credit: CBS, Fair use, offered for criticism and education
Note that "sack two" should have been credited to Dwight White, not Greenwood. It is hard to see but the right end got the sack, not the left end. On the right side of the defensive line the Steelers ran a "Tex" game with the tackle going first, exchanging lanes with the end, and on the left side it was an "Exit" game with LC Greenwood going first and Joe Greene going second. All four got good pressure but Staubach had to hold the ball and White came in from the middle and got Staubach down.
Greenwood was an excellent player and this is, perhaps, his crowning jewel even if it was three sacks rather than four. Not all the sacks are "pure sacks" there is a mix of coverage and Staubach scrambling around, but those things still happen post-1982.

So here is to L.C. his initials that do not stand for anything, it's just L.C.
Posted by John Turney at 5:03 PM