Gary Jeter, former Giants and Rams defensive end, passes away at 61. Jeter’s cause of death has not yet been reported.
Gary Jeter was USC’s Defensive Player of the Year in 1975 and as a senior was and All-American honors. The New York Giants drafted him with the fifth overall pick in the 1977 NFL Draft.  He was a part-time starter in 1977 at left defensive end and made 32 tackles and sacked the quarterback three times. As in 1978 as a defensive tackle he recorded three sacks. 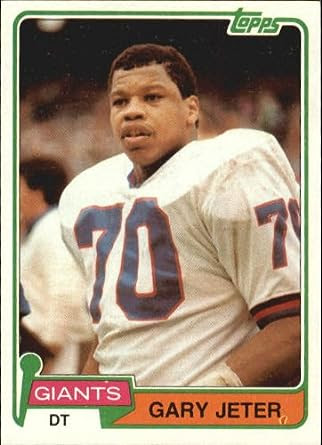 In 1979 he won the starting job at right defensive end in the Giant 3-4 defense and he held that spot through 1981. He had four sacks in 1979 and he led the team in sacks in 1980 with ten and was named a Pro Bowl alternate. Despite injuries limiting him to 12 games in 1981 he was third on club with seven sacksIn 1982 he was felled by injuries and totaled only 9 tackles and did not record a sack, leaving the Giants with 27 sacks.

In 1983 Jeter was traded for a 3rd-round pick and a 6th-round pick to the Los Angeles Rams, a team that was to a 3-4 defense. figured into their plans as a starter, however, his role with the team from 1983-88 was as a designated pass rusher (DPR), a player who came into the game on likely passing downs and was highly successful at it.
He played mostly right defensive tackle in those situations in 1983, when Rams used a 4-man line. In 1984 he missed significant playing time with a herniated disc in his lower back, but in 1985 he returned healthily and he usually played right defensive end in the Rams 30-nickel scheme and right defensive end in the 40-nickel, though he still played some tackle in the 40-nickel.
witch seemed to work as Jeter was named the George Halas Courage Award winner by the Pro Football Writers of America after recording 11 sacks and adding 3 more in the playoff game against the Dallas Cowboys. Those 11 sacks led the NFL for non-starters, essentially making him the NFL's top player that season in the DPR position (one that Fred Dean excelled in from 1981-84). In fact, his 1985 season was good enough to rank 11th in Pro Scout Inc's ratings of all defensive ends, regardless of if they were starters or not.

Here is some video of Jeter in the 1985 Playoff game versus Dallas. Rams used a 3-man line that day, rather that going to their usual nickel, as analyst Dick Vermeil notes.

In 1986 he led the team with eight sacks and in 1987, again, he led the team with seven. In 1988 he had 11.5 sacks. The Rams used what they termed the "Eagle" defense with featured two linemen and five linebackers, and Jeter was one of the two linemen in that scheme and was usually at right defensive tackle in the 40-nickel/dime the Rams recorded 56 sacks which led the NFL and tied a then-franchise record (set in 1980 and tied in 1985). On September 18, 1988,  had 5 sacks in a 22-17 victory over the Raiders, which was Jeter's career high for a single game. For his efforts, he was named the NFC Defensive Player of the Week. (His first sack was of the "crawling" variety and another was of the one-armed variety—see "Yak strong" below) His 11.5 sacks again led the NFL's non-starting players (less than 4 starts) in that category and was his career-high.

5 sacks in 1988 vs. Raiders. Fair use claim, for criticism and
In 1989 Jeter was left unprotected by the Rams and as such was an unconditional free agent the Patriots signed him to a Plan-B free agent contract where was second on the Patriots in sacks with seven.  However, age and hip and thigh injuries caused the Patriots released him and in 1990 he re-signed with the Rams, but his back injuries caused him to fail the Rams physical, ending his careerIn 13 NFL seasons, Jeter finished his NFL career with 79 sacks in the regular season and five more in post-season play.

was 6-4, 260 pounds and has a recorded time of 4.9 in the forty-yard dash coming out of USC. He was called "yak strong" due to his natural strength. He pursued a career in broadcasting during his playing days, landing an internship with CNN.

For more on his High School and Collegiate career you can click HERE and HERE
Posted by John Turney at 5:57 PM