PERSPECTIVE
By John Turney
As Coach T.J. Troup wrote earlier this week,  Rudy Bukich, a Rams backup quarterback passed away. The man he backed up in 1956 with the Rams and who he also split time with in Chicago, Billy Wade passed away today. These two were connected in that they backed Van Brocklin and then ended up with the Bears and it marks the third pair of Rams that that were connected passing away in close proximity to each other.

March 25, 1983, Bob Waterfield, Rams Hall of Fame Quarterback passed away and six weeks later on May 2, 1983, Hall of Famer Norm Van Brocklin followed him in passing.

On August 1, 2001, "Deacon" Dan Towler died and, again, six weeks later, his co- in the Bull Elephant backfield of the Rams, Tank Younger, followed him in passing on September 15, 2001.

Here is a re-post of the story  Billy by Coach Troup last October.
Enjoy:

BILLY WADE and the '61 BEARS 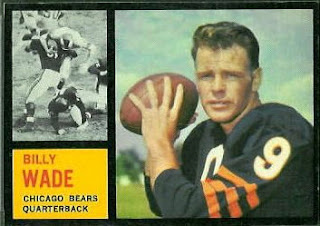 COACHING
When George Halas again took the reigns to run his team in 1958 he expected to again be a champion. When the Packers entered Wrigley Field on December 4th, 1960, with first place on the line; his team faltered badly (Bears also lost last two games of  to finish 5-6-1). Papa Bear still has the same group of men helping him guide his team. Luke Johnsos is in his 25th season, while Paddy Driscoll is in his third campaign after a year off in 1958. Sid Luckman is in his 8th season coaching the quarterbacks, and Phil Handler his 10th coaching the offensive line. Chuck Mather is in his 4th year coaching the offensive backs; while George Allen still directs the personnel department, and helps defensive co-ordinator Clark Shaughnessy (his 11th year) with the secondary. Clark still uses multiple defensive fronts, and blitzes much of the time and thus man coverage is still preferred. The Bear offense has gone from the slot-t formation to a pro alignment with the backs in either split, or aligned away from the tight end. The spread formation is used on  with a one of the backs aligned as a wing.
PERSONNEL
Forty men  up for the Bears during the year, with only 10 men in their last or only year. Ten rookies make the team. Maury Youmans starts at left defensive end, though Bob Kilcullen sees playing time there also (he also fills in at right defensive end). Veteran Fred Williams is still difficult to move at left defensive tackle, though he is not much of a pass rusher. Right defensive tackle is shared by massive John Mellekas, and Roger LeClerc; though neither distinguished himself. Doug Atkins earns another Pro Bowl berth and Second team All-pro recognition with his strong play against the run, and his top notch ability to rush the passer. 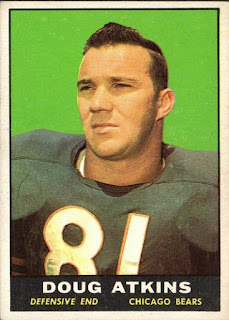 Larry Morris is by far the best blitzing right linebacker in the league, while he still is a factor as a run defender. Left linebacker Joe Fortunato can also blitz effectively, yet he is also an able pass defender and tackler. Bill George is in his eighth season  middle linebacker, and though he is not as mobile as in years  gets his knuckles in the dirt as a fifth defensive lineman to fill gaps, and attack the quarterback. He ranks among the league leaders in sacks, and against Detroit in December records 4 takeaways (two fumble recoveries & two interceptions). Bill is voted Second team All-pro and again heads to Los Angeles for the Pro Bowl. 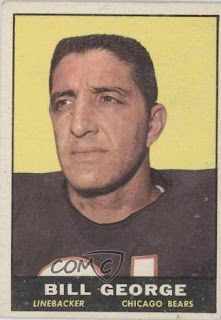 The masterful trade by George Allen to acquire Dave Whitsell fills the right corner post. Though he was a safety in the past; Whitsell acquits himself well as he intercepts 6 passes, and is a force against the sweep. J.C. Caroline still has the savvy to handle left corner. Richie Petitbon is asked to change positions for the year from strong safety to free safety. Though he makes numerous fine plays, and is a punishing tackler, Richie is much better suited  his former position. Harlon Hill moves to defense and attempts to play strong safety (he moves back to offense late in the year). His knowledge of the passing game aids him at times to make interceptions, but many times he is out of position, and he is an average tackler at best. His poor performances against Green Bay and San Francisco in mid-season force a change. Bobby Jackson is a slight upgrade for the last few games of the year. Swift rookie free agent Rosey Taylor fills in at , and some at strong safety. 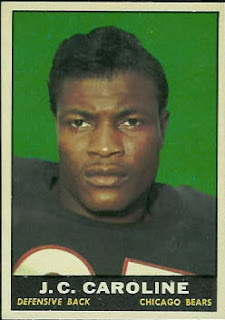 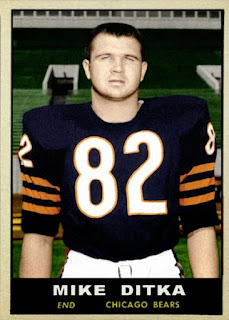 WHAT THE STATS TELL US: Defensively the Bears allow 139 yards a game rushing in their 6 losses, and 102 a game in their 8 wins. The keys to victory on defense come from the ferocious pass rush that garners 34 sacks for 259 yards in the 8 wins. Opponent passers torch the Bear secondary to the tune of 90 completes for 1,335 yards with 15 going for touchdowns, and only 8 interceptions in the 6 losses. The eight wins tell a different tale as opponents complete 119 out of 239 for 1,829 yards with 12 going for scores, and the Bear thieves pilfer 16.  & Wade are the difference makers on offense.  gains 434 yards receiving and 456 rushing in the 8 wins. Wade completes 54 of 99 for 855 yards, with 8 going for touchdowns, and 7 intercepted in the 6 losses, but in victory Billy shines as he completes 85 of 151 for 1,403 yards with 14 scores, and just 6 intercepted. The adventures in the kicking game are a sore spot during the year. Roger LeClerc makes 2 of his first 5 field goal attempts, then makes just 1 of his next 8. He  a team record with 5 against Detroit, and finishes with just 2 of his last 6.
Posted by John Turney at 3:57 PM