LOOKING BACK
By John Turney
The names for defensive players is said to go back to Paul Brown, the HOF coach and founder of the Cleveland Browns and the Cincinnati Bengals. In fact, he is credited with a great many things.

To this day, his terms for the linebackers have survived, Sam for the strong-side linebacker, the one who is on the side of the tight end. Mike for the middle linebacker and Will for the weak-side end, the one away from the two-receiver side. They are pretty universal among coaches and the media when describing the positions.

However, they are not the only names that have been used. George Allen called his linebackers Stub (strong-side), Mac (middle) and Buck (weak or "back" side". It isn't known if  are Allen's terms of if he inherited them from Clark Shaughnessy, who preceded him as the defensive coach of the Chicago Bears. Shaughnessy was an offensive and defensive innovator, but we have not seen one of his playbooks as of yet to precisely what nomenclature he used. As of the mid-2000s, a few teams used Allen's terms for linebackers and  defensive linemen as  they do not seem as common, though, as the Paul Brown terms.

Tom Landry had his set of terms  the  as well. His verbiage was Sara (strong-side), Meg (middle) and Wanda (weak-side). Those terms are defunct as they were tied to Landry and his Flex defense. Dick Nolan took the Flex to the 49ers in 1968 and then he took it to the Saints. Landry used it until he was fired after the 1989 season. None of his disciples carried on that language for their linebackers.

There are, however, a few variations that have been used, combinations or hybrids, and with the popularization, for the 3-4 defense a name had to be added for the extra linebacker and that term is far from universal.

Here are some screenshots of a few of the defensive terminology pages from various playbooks over the last 40 years.
This shot is from the 1970s Washington Redskins Playbook:


Here are some others:
Belichick uses Allen's  for his front, but uses the Brown terminology for the 'backers. The "LON" is left-outside and the "LIN" is left-inside, "RIC" is right - and "ROY" is for right-outside. He does not use the George Allen verbiage for what Allen called "Deeks" of defensive backs. Belichick uses strong and weak Allen called the strong-side safety Sam and the weak safety Jill.

In this playbook, using Bill Arnsparger's language "Ted" was added as the inside linebacker to the tight end side in a 3-4 defense.

Joe Collier used these terms when he was the defensive coordinator for the Patriots in 1992. Rather than "Ted" the term, was "Zip". 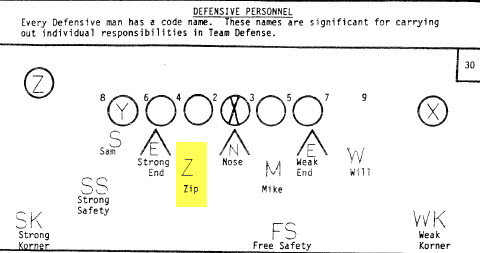 Buddy Ryan used Sam, Mike, and Will for his base players, but when he used the 46 defense he used "Jack" and "Charley" for Otis Wilson and Todd Bell/Wilber Marshall. 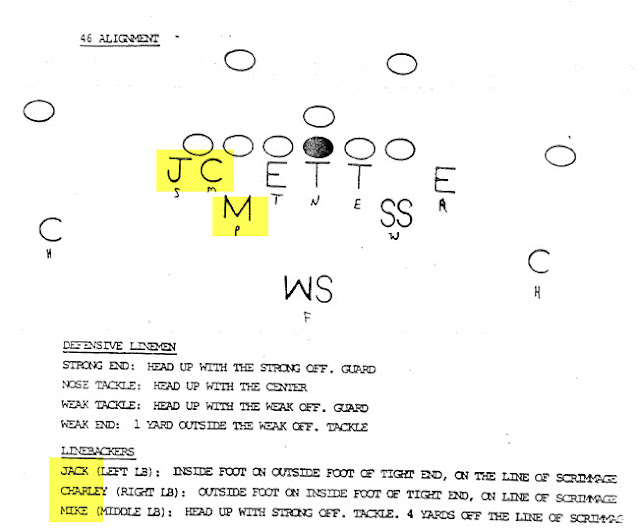 Bud Carson, like Bill Belichick, used George Allen's terms for  (defensive line) but used Toby for (TE-side or strong side) and Opie (open side or weak side).

George Siefert's defense had a couple of unique terms. He had a "Plugger" rather than "Ted" or "Zip" And his Buck was a strong backer and his "Whip" was the spot played by Charles Haley, Rickey Jackson, Tim Harris, Kevin Greene, etc. Sometimes it was called "Elephant" but that term was for Sieferts's 4-3 defense package and the rush was still the "Whip". However, the 49ers in their media releases listed Jackson and Greene as "Ele" so it caught on. 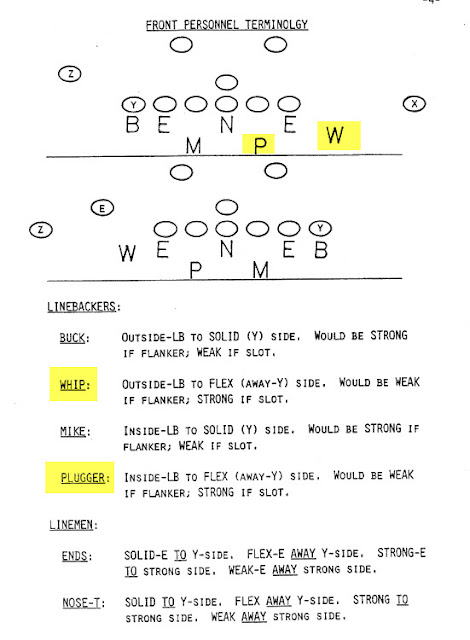 In 2002 this was the verbiage for the Bengals base defense.

Capers used this verbiage, as it is from the 1997 Panthers playbook. Buck is his preferred term. 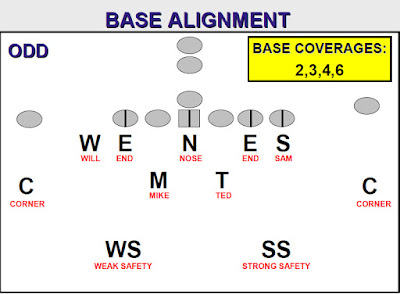 The Eagles Jim Johnson used this, and his disciple Steve Spagnuolo uses it still, it is the Paul Brown terminology and in our view the  nomenclature for 'backers. Below is a stack front, which is very common in base defenses in the 2000s-2010s. 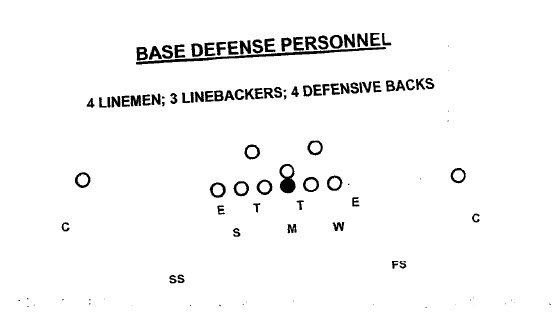