Then, There are the Cringeworthy Jock Ads

Sometimes nostalgia does not make you smile, it makes you, well, glad it is not 1966.
Photographer: "Hey, Frank Gifford, you smile while Bobby Hull puts a pineapple on the Hawaiian kid's head. That won't be culturally insensitive in any way. Yeah, that's the ticket." 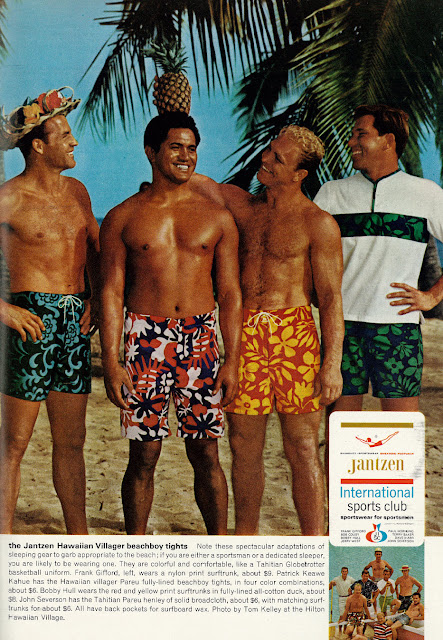 Opening advert text:
"The Jantzen Hawaiian Villager tights - Note these spectacular of sleeping gear to garb appropriate to the beach; if you are either a sportsman or a dedicated sleeper, you are likely to be wearing one. They are colorful and comfortable, like a Tahitian Globetrotter basketball uniform."

Bobby Hull (born in 1939) is a Canadian former ice hockey player; he is regarded as one of the greatest players of all time.

John Severson (born in 1933) is a legendary surf world writer, editor, publisher, photographer, filmmaker, and artist. He is best known as the founder of "Surfer" magazine in 1960, and is credited with creating "surf culture" and the surfing industry.