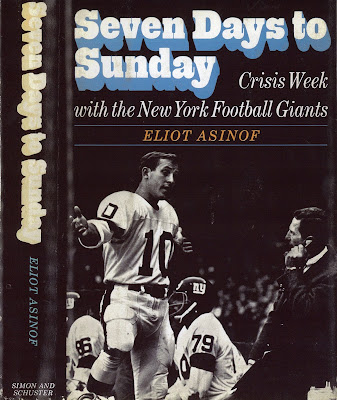 Seven Days to Sunday: Crisis Week with the New York Giants was written by Eliot Asinof and published in 1968 by Simon and Schuster. If you don’t know the name, Asinof is most famous for writing Eight Men Out, the definitive account of the 1919 Chicago Black Sox Scandal that was published in 1963. Twenty-five years later in 1988 Asinof helped Hollywood director John Sayles in turning his book into a movie that starred D.B. Sweeney (Joe Jackson), John Cusack (Buck Weaver), David Strathaim (Eddie Cicotte), Charlie Sheen (Happy Felsh) and Sayles himself as famed newspaper writer Ring Lardnar.
was born on July 13, 1919 in New York City. Growing up in the Big Apple Asinof worked at his father’s tailoring shop before graduating from Swarthmore College in 1940. He then spent the next two years playing minor league baseball in the Phillies organization and batted296, had 17 RBIs and 47 runs over the two summers. He then left baseball to enter the Army during World War II.

When the war ended Asinof gave up the ball diamond and began his writing career. His first book was titled Man on Spikes, a novel about a friend Mickey Rutner, who played minor league baseball too and appeared in the major leagues. It was published in 1955 by McGraw-Hill. After his success with Man on Spikes Asinof was recruited to write the story of the 1919 Chicago Black Sox Scandal. He spent three years researching and writing the book. It became a classic and an instant best-seller.


But five years after Eight Men Out was published Asinof wrote a football book- Seven Days to Sunday- a week with the New York Giants during the 1967 season. At first, Asinof wanted to follow one NFL team for a whole season. Following the teams’ every move. Most importantly, he wanted to be able to go anywhere, at any time. He wanted total access. That was the plan. Since he was living in New York and the New York Football Giants were his favorite squad, he knew which team he wanted to ask.

Plus, in 1965 Asinof had written an article for New York Times Magazine (December 12 ) about Giants head coach Allie Sherman titled “Big Shrimp of Pro Football.” He spent time with Sherman and his wife Joan for his roughly 8-page article. Already having a connection with the Giants Asinof knew who he could ask for this special access. But the process of getting to that one specific week in ’67 Asinof first had to convince another important person with the Giants to let him document a season. That was going to be a big chore.
In 1965 the Giants were coming off a 7-7 season under Sherman- who had just finished his 5 at the helm. Giants’ owner Wellington Mara was happy to give his coach another year, since Sherman had guided the Giants to three straight NFL Championship Game appearances (1961-1963). Although all three were losses. It was under these circumstances that Asinof approached the Giants with his big idea. wrote in his Introduction:
“Nevertheless, one blustering winter day in 1966, I mustered the courage to visit the Giants office at 10 Columbus Circle. It was, I confess, immediately intimidating, for you to be greeted by a series of huge floor-to-ceiling panels showing ferocious action shots of Rosey Brown, Tucker Frederickson, Y.A. Title, Frank Gifford, giant figures, larger than life, towering over all the little people who dare enter.
I presented myself to Wellington Mara and Allie Sherman, a humble fan in search of a story. I told them what was in my mind, this gnawing hungry for intimacy. A fan’s book, written by a fan for fans. A labor of love, if you please. I made it clear, however, that it was worth doing only if it could be done thoroughly, no rooms barred, no meetings sealed off, nothing hidden. Absolutely nothing, I emphasized.


“That’s an extraordinary request,” Mr. Mara said. “Nobody ever gets that kind of inside look.”
“It would be the very guts of my book,” I replied. “Well, will think it over,” he said.


I went about my work and forgot about it- or tried to- never expecting to be accepted. Then, a week later, Mara called.
“Welcome to the family,” he said.

Starting with the opening of training camp in July of 1966 Asinof moved freely through the inner sanctums of the Giants organization, having access to coaches, players and front office personnel. Over the next two years Asinof recorded and observed the day-to-day operations of an NFL team.  He witnessed rookies being cut, to head coach Allie Sherman staying up all night game planning, game days at Yankee Stadium.


During the 1966 season Asinof witnessed the worse campaign in Giants history. Sherman guided his squad to a 1-12-1 record and the defense allowed NFL record 501 points in just 14 games (an average of 35.8 per game). They are still the only NFL team to surrender over 500 points in a 14 game schedule. On November 27, 1966 the Giants played in the NFL’s highest scoring game of all-time- still NFL record- in a 72-41 loss to the Washington Redskins.


Maybe this is why Asinof came back in 1967. He was not ready to write about one of season in NFL history for any franchise. So he returned to the inner sanctum of Sherman’s team and witnessed more of the going-on of NFL team. Eventually Asinof had one big problem. How to construct his book. What would all of this lead to? Then in the middle of the 1967 season an idea came to him. “A crisis week.” Asinof wrote:
“A week that might turn the season, one way or the other, to a divisional championship or another sickening fall to the cellar.”
picked the Giants tenth game of the season against the Pittsburgh Steelers to focus on. The Giants had just lost back-to-back road games against the Minnesota Vikings (24-27) and Chicago Bears (7-34) and were in 3 in the newly named Century Division (after the announcement of the AFL-NFL merger) with a 4-5 record. focused his story on the week from 13 through Sunday November 19.

Seven Days in chronological order of the week, Monday to Sunday, with “Monday Again” as the final chapter. Throughout the week Asinof sat in on meetings with coaches and players. One of the more interesting moments is when Sherman meets with quarterback Fran Tarkenton, something they did every Tuesday during the season, and goes over the game plan for the week. The two go over the up-coming defensive unit; study formations; analyze pass coverage: and note and manner of blitzing.


As the week goes along Asniof gives background and backstory information on players and coaches. Some of the more detailed and better bios are on Sherman, Fran Tarkenton and Homer Jones, as well as several conversations with Wellington Mara. But Mara definitely stays in the background and away from Asinof for the most part. The author spends more time in meetings, the training room, on the practice field, in press conferences and the locker room.


also retells what training camp is like and how the team moves into a team hotel on Saturday night before the game against the Steelers. Taking up to twenty rooms on the 16 of the Summit Hotel in New York, the Giants watch the big USC-UCLA game (featuring O.J. Simpson Garry Beban), while some players play gin rummy (Joe Morrison, Earl Morrall, Tucker Fredrickson, Bill Swain). The squad then has its team dinner loaded with shrimp cocktail, prime ribs, baked potatoes, green beans, rolls, pastry, coffee and milk. Inside access that not too many people outside of NFL team witness and Asinof had a front seat.
On game day Asinof puts the reader on the team bus to the stadium; in the pre-game locker room and trainer’s table; warm-ups on the field; the action on the bench and on the gridiron of Yankee Stadium; as well as the post-game locker room. describes “Sunday” in 64 pages- the Giants hard-fought 28-20 victory over the Steelers. But it wasn’t enough as Sherman’s boys finished the season with another 7-7 record and two games behind the Browns (9-5) in the Century Division.
Seven Days to Sunday was released in hardback $5.95 in the fall of 1968 by Simon and Schuster to brisk sales and good reviews. The Kirkus Reviews (October 23) :


“No, Asinof isn’t a Paper Lion in training, nor is he snappy a writer as there isn’t much he doesn’t know or like about the New York Giants, and he sat it out play-by-play with them for two years. The Seven Days to Sunday he records is the crisis week in 1967 before the game which could make or break the season. The Giants suffered a sloppy defeat, ignominiously dumping them into third place the day before, from the Chicago Bears; they faced the Pittsburgh Steelers and four games in a -win situation. And the Giants’ morale had been cut down to pygmy size. This follows the emotional and tactical arrangements by coach Allie Sherman as he tried to get his fumbling football players together again. A locker-room log that is another intimate, exciting look at our newest national pastime.”
Heywood Hale Broun of New York magazine (November 11, 1968) glowed, saying “Asinof’s book captures rhythms and moods of the pro football players in a game dominated by a productive hysteria,” and Bill Stern, famed sports broadcaster for NBC and ABC, claimed it was “the best sports book I have ever read,” while Murray Kempton of the New York Post wrote, “A quite marvelous book.” 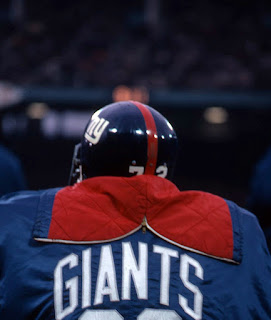 A year later an excerpt of the book appeared in the November 1969 issue of Quarterback magazine- 14 pages in length- that kept the book alive as the paperback version was released.
Seven Days to Sunday is an excellent look inside how NFL team operated and functioned in the NFL during the 1960’s. Unlike more recent work such as John Feinstein’s Next Man Up, Asinof puts himself in the story, which Feinstein never does in his books- a technique I like better. The small interaction between Asinof and the coaches and players is a little distracting and uneventful, but not enough to take away from the rest of the inside access he was granted by the Giants.


After Seven Days to Sunday Elliot Asinof never wrote another football book. He died in 2008 at the age of 88. 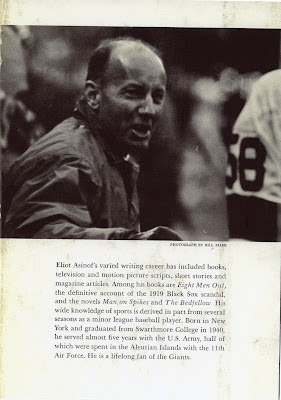