When compiling my list of the Top 100 Pro Football Books of All-Time I had just a few criteria that I kept to. Of course the book had to mainly be about pro football, so sorry no Friday Night Lights. I also took consideration the research, the writing, the historical impact of the book, and if you should permanently own it in your football library. All 100 books here met these criteria. Over the next five days Pro Football Journal will count them down. Here are numbers 40-21.

40) Instant Replay the Green Bay Diary of Jerry Kramer  Jerry Kramer with Dick Schaap (G.P. Putnam, 1968) Jerry Kramer's diary of the Packers' 1967 season is filled with plenty of honesty, humor and passion. Edited with the help of Dick Schaap, Instant Replay gives behind-the-scenes insight into one of the greatest teams in NFL history, including speeches by Vince Lombardi and Kramer's views of playing in the Ice Bowl. 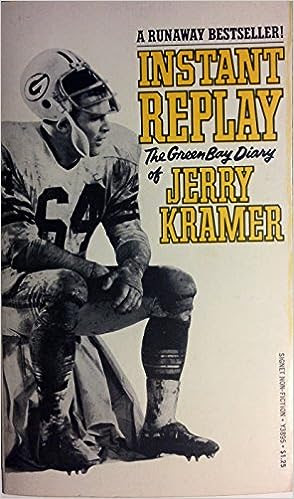 39) Hey, Wait a Minute I Wrote a Book by John Madden (Villard Books, 1984) After retiring as Raiders head coach after the 1978 season John Madden (with partner Pat Summerall) quickly became the NFL's top color analyst on TV. In 1984 with the help of Dave Anderson, sports columnist of the New York Times, the lovable Madden wrote Hey, Wait a Minute (I wrote a book!). In his own humorous way Madden tells tons of stories ranging from his childhood in northern California to his coaching days with the Raiders and his current career as the sports top announcer. He also tells stories of his time as pitchman for Miller Lite, hence the title of the book. Madden would go on to write two more books with Anderson: One Knee Equals Two Feet (and Everything Else You Need to Know About Football) in 1986 and One Size Doesn't Fit All in 1988.

38) The Origins and Development of Professional Football by Marc Maltby (Garland Publishing, 1997) Originally written as a dissertation Marc Maltby's The Origins and Early Development of Professional Football is one of the books a serious football historian should read. Constructed and organized like a text book, it reads better than if you were sitting in a classroom. Using primary and secondary sources Maltby doesn't get bogged down in academic rhetoric and writes a very readable 200-page history of the early pro game.

37) The Scrapbook History of Pro Football by Richard Cohen, Jordan Deutsch, Roland Johnson and David Neft (Bobbs-Merrill, 1976) The Scrapbook History of Pro Football is over 300-pages of newspaper headlines and clippings showing the history of the pro game. Laid out in scrapbook history is a book that you can pick up , to a certain page and learn something new.

35) Iron Men: Bucko, Crazylegs, and the Boys Recall the Golden days of Professional Football by Stuart (Doubleday, 1988) Published in 1988 Stuart , an author of two previous oral history books on World War II fighter pilots and railroaders, tackled pro football in the 1940’s and 1950’s, by interviewing 26 different subjects including Marion Motley, Elroy “Crazylegs” Hirsch, Pat Summerall, Otto Graham and Bucko Kilroy. Fantastic stories from the men who played the game during that era. 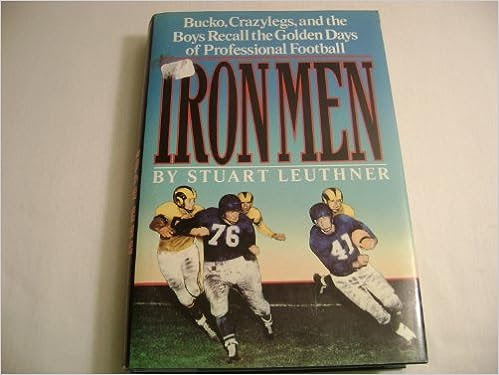 34) Tough Stuff by Sam Huff with Leonard Shapiro (St. Martin's Press, 1988) Former Giants and Redskins middle linebacker Sam Huff, with the help of Washington Post sportswriter-editor Leonard Shapiro, tells his story in Tough Stuff. Huff's autobiography gives tons of insight into the success of the New York Giants of the 1950's, especially his relationship with defensive coordinator Tom Landry (and the development of the 4-3 defense), becoming a celebrity in New York, and almost quitting the team as a rookie. He also reveals his feelings for Vince Lombardi, who coached the offense in New York before taking over the Green Bay Packers, and asked Huff to come out of retirement to play for him in Washington in 1969.

33) Building a Champion by Bill Walsh with Glenn Dickey (St. Martin's Press, 1990) After winning Super Bowl XXIII and retiring from the NFL (in January 1989) Bill Walsh partnered with San Francisco Chronicle sports columnist Glenn Dickey to write his autobiography. Building a Champion shows off Walsh's mastery of preserving his legacy, as well as showing why he was one of the most successful coaches in NFL history. Very detailed and educational, Walsh's autobiography is pure gold for football readers. 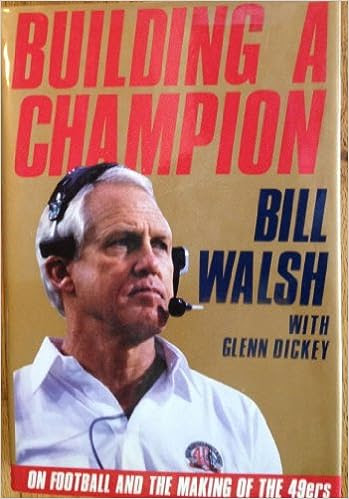 31) PB: The Paul Brown Story by Paul Brown with Jack Clary (Atheneum, 1979) Paul Brown’s autobiography, written in 1979 Jack Clary a sportswriter with Associated Press & the New York World Telegram and Sun, reflects on his entire career up to that point: as -coach, administrator, owner and Hall of Famer, as well as a husband, father and . Brown goes into great detail of his career at Ohio State, Great Lakes and the Cleveland Browns. Some of the best stuff is about the Browns’ first season in the NFL in 1950 and his dismissal from the Browns by Art Modell. “I had this excruciating experience the morning after I was fired, when I found the contents of my desk, and the pictures of my family, in a cardboard box on my front porch. The message was very clear: Don’t come back to the office. So ended seventeen years of my life.”

30) I Am Third by Gale Sayers with Al Silverman (The Viking Press, 1970) Gale Sayers teamed up with Al Silverman, editor of Sport Magazine at the time, to write one of football autobiographies of all-time. I Am Third stands for "The Lord is first, my friends are second, and I am ." Sayers lived by this credo and reveals his life story about his drive to be one of the best running backs of all-time. He goes into detail about his childhood in Kansas, his struggles to overcome his knee injury that he suffered in 1968 and his career as a professional football player. But it was Chapter 6 that would make the book famous. Titled "Pick" the chapter describes his relationship with Bears teammate Brian Piccolo. The chapter would eventually spawn, arguably the greatest TV movie of all-time, "Brian's Song." 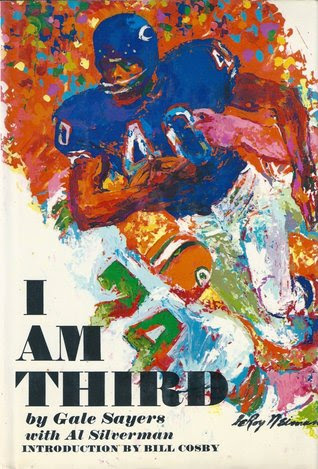 29) Out of Their League by Dave Meggyesy (Ramparts Press, 1971) Dave Meggyesy was just 28 years old and had just played his 7th year in the NFL as a linebacker with the St. Louis Cardinals when he quit pro football and wrote Out of Their League. At the height of his career Meggyesy wrote about the dehumanizing side of the game that included views on racism, drug abuse, payoffs, and the violence of the sport. When it came out in 1971 it shocked readers and football fans about the true nature of the NFL. It has been compared to Ball Four by Jim Bouton the baseball version of what was going on in the locker room that was published in 1970.

28) Paper Lion by George Plimpton (Harper-Row, 1966) George Plimpton, the editor of the Paris Review at the time, convinced the Detroit Lions to allow him to participate in training camp and write about his experiences. So in 1963 Plimpton arrived as an unheralded rookie and for four weeks was groomed as a back-up quarterback behind Earl Morrall and Milt Plum. Of course, the result of Plimpton's time at Lions training produced Paper Lion.

27) Going Long The Wild Ten Year Saga of the Renegade American Football League in the Words of Those Who Lived It by Jeff Miller (McGraw-Hill, 2004) Jeff Miller, the sports editor of the Dallas Morning News, combs through 170 interviews to write the definitive history on the American Football League (AFL). This oral history book gives readers everything they want to know about the AFL's ten-year existence. If there is only one book you read about the AFL, then Going Long is the one.

"In January of '59the thought just occurred to meWhy wouldn't it be possible to form a second league?It was like the coming on over your head." -  Lamar Hunt, Founder of the AFL. 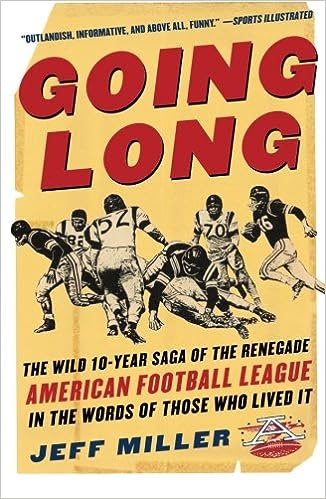 26) The Sunday Game: At the Dawn of Professional Football by Keith McClellan (University of Akron Press, 1998) The Sunday Game is simply one of the best  on pro football covering the early years right before World War I and the birth of the NFL. Keith McClellan goes into great detail of the years covering 1915-1917 and each major city/team that fielded a squad during those three pivotal years. Loaded with tons of players, games and events The Sunday Game gets readers as close to the early game as possible. It also includes 46 images included photos of the Nesser Brothers, Jim Thorpe, Earle "Greasy" Neale, Cub Buck, and Knute Rockne.

25) The League: The Rise and Decline of the NFL by David Harris (Bantam Books, 1986) This is the second book by David Harris to make the list (The Genius # 75 on list). Harris spent three years doing research and interviews for his nearly 600-page expose on the NFL that was published in 1986. The League gives readers an insight into the board rooms and dealings of NFL owners and the League office. With his focus on Pete Rozelle, Al Davis, Carroll Rosenbloom, Billy Sullivan, and Leonard , Harris on all the big-time players of the NFL in the 1970's and 80's.

24)  Cotton Bowl Days Growing up with Dallas and the Cowboys in the 1960s by John Eisenberg (Simon & Schuster, 1997) Just like David Harris this is the second book by John Eisenberg to make the list (Ten-Gallon War, # 53 on ) and is a memoir of his childhood in Dallas rooting for his hometown heroes, the Dallas Cowboys. Written with charm and passion Cotton Bowl Days takes readers through a time capsule that true fans can relate to. Although I don't root for the Cowboys, I found myself captivated reading the stories of Eisenberg's football journey. 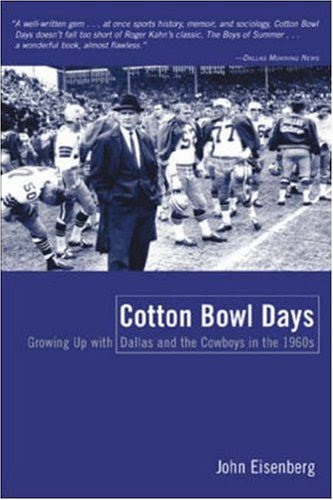 23) Namath: a Biography by Mark Kriegel (Viking, 2004) When Namath hit bookstores in 2004 I said to myself, what could be written about Namath that I might not know by now. He had been covered extensively already. But Mark Kriegel, a former sports columnist for the New York Daily News (and current analyst for NFL Network) proved me wrong. Namath revealed new nuggets of information (his relationship with his father and his time at Alabama) that makes this biography a must-read. Only two other football biographies are higher. 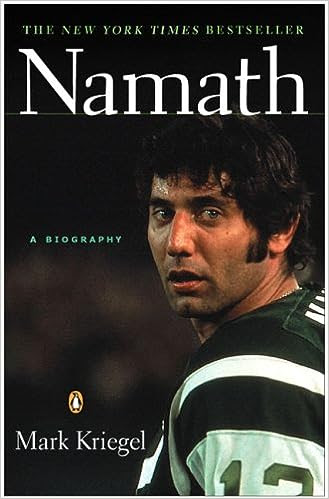 22) The Game of Their Lives by Dave Klein (Random House, 1976) Dave Klein, sports columnist of the Newark Star-Ledger writes 13 chapters of pure nostalgic on the players who played in the 1958 NFL Championship Game. Klein interviewed 13 players: Sam Huff, Alex Webster, Rosey Grier, Jack Stroud, Kyle Rote, Andy Robustelli, and Charlie Conerly of the Giants; and Gino Marchetti, Alan Ameche, Johnny Sample, Raymond Berry, Lenny Moore and Johnny Unitas of the Colts. He interviewed his subjects their home, office and a bar, and recorded their memories of the Greatest Game Ever Played, as well as what happened to them afterwards. To quote Klein’s Author Note, “This book is not really about the game at all. It is about the men who played it.”

21) Punt, Pass & Kick Library Series (Random House, Multiple Years) No list of the top pro football books of all-time can be complete without the Punt, Pass & Kick Library set. First published in 1965 with How to Punt, Pass and Kick (by Richard Pickens) all the way to All-Stars of the NFL (by Bob Rubin) in 1976, the PP&K Library consisted of 24 total books. Authors such as Dave Anderson, Jack Hand, Zander Hollander, Howard Liss, Phil Berger, Bill Libby and Bob Rubin contributed their writing prowess to this series. If you grew up a football fan in the 1970's and 1980's then you read these books growing up. I know I did as a young fan in Ohio. These were my first books I read football. I know I'm not the only one.