We at Pro Football Journal are trying to pick the best individual seasons in the history of each franchise, which we will continue today with the Houston Texans. By "Career-year" we mean the best performances at each position, with the following rule: Only one season per player per position. For example, here, we cannot pick J.J. Watt's best two seasons and use all the defensive end slots. 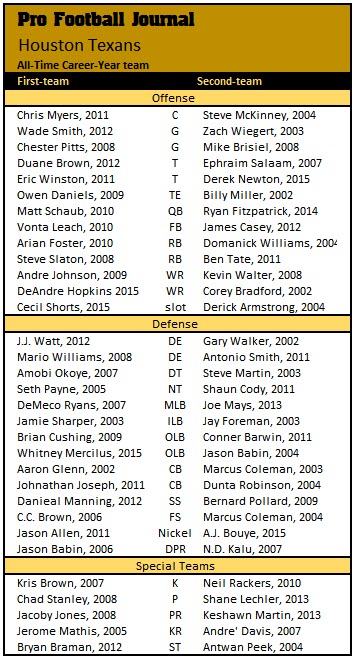 You'll see Marcus Coleman as a Second-team selection at two spots, first, since they are different we do that and also, there were not other good free safety choices. Aaron Glenn was a big-name free agent signing by the Texans in and he had an All-Pro year in 2002.  Robinson had a fine rookie season in 2004 and gets a Second-team nod. Johnathan Joseph was a Pro Bowler and Second-team All-Pro in 2011. Brian Cushing has played both inside and outside, but his 2009 rookie season was excellent. He had 8.5 /pass stuffs, a career-high 4 sacks and -high 4 interceptions a career-high 133 tackles and also had career-highs in passes defended and forced fumbles.

At first glance, it was a very close call between Whitney Mercilus's 2015 season and Connor Barwin's 2011 season. However, Mercilus had more sacks and more stuffs as Barwin had only one stuff the season to go with his 11.5 sacks, thus he gets a Second-team slot with Jason Babin. Babin also gets a First-team designated rusher slot due to his role in 2006. Babin, early in his career, was compared to Kevin Greene in size, speed, and style by Proscout, Inc, but he never reached that level of play, but has been an effective rusher around the league for a long time.

Again, special teams are based on honors and then statistics. returners, touchdowns the key stat plus honors. Mathis and Jones were both excellent in their respective seasons, gaining -wide honors and taking kicks and punts to the house.

The nose tackles are decent, but not special, Okoye had a couple of nice seasons as a 3-technique when the Texans were in the base 4-3 defense. The Second-team defensive ends are solid, both were Pro Bowl selections and complimentary players.

Mario Williams was a First-team All-Pro by Sporting News in 2007 and 2008, we went with 2008 though he had 2 fewer sacks he had more stuffs and a career-high 4 forced fumbles.

J.J. Watt presented problems with three Defensive Player of the Year awards. Which was the best?
2015, while excellent, but it was eliminated and that left 2012 and 2014. In 2012 he had 22.5 /pass stuffs in addition to his 20.5 sacks for an astounding 43 plays behind the line of scrimmage and 16 passes deflected. In 2014 he had 13.5 /pass stuffs and 20.5 sacks, but he also recovered five fumbles, had a pick-six and a scoop and score and played offense and played it well. We went with 2012, but there is room for debate. The offensive line was based on post-season honors and how well the team did offensively, the pickings got kind of slim for the Second-team, but looking at grades and other factors from the literature of the day, we made the picks you see.

Running backs and quarterbacks were based on statistics as well as Pro Bowls/All-pros, those usual things. The 2010 backfield was well represented and the choices were very clear. Owen Daniels got the tight end other years could have been chosen for him.

Hopkins got one slot at wide receiver and with Johnson, like Williams and Watt had more than one season to look at, but by a narrow marginwe went with 2009 when he was a   All-pro and the NFL Alumni Wide Receiver of the Year, led  NFL in receiving yards. One deciding factor was the 15.5 yards per catch in 2009 versus the 13.7 average he posted in 2008.
Agree or disagree? Post in the comments section below.